Leaders in Telangana to firm up dynasties in polls

Hyderabad: The 2019 general election could see the emergence of a new generation of dynastic political leaders in the state, if senior leaders succeed in getting their family members nominated for elections.

According to speculation in the ruling TRS and the opposition Congress, some of their senior leaders are trying to get party tickets for their family members.

With Chief Minister K. Chandrasekhar Rao’s plan to make some of his ministers contest for the Lok Sabha, sources said the senior leaders are planning to get their family members nominated for the Assembly election to protect their hold on their constituencies. 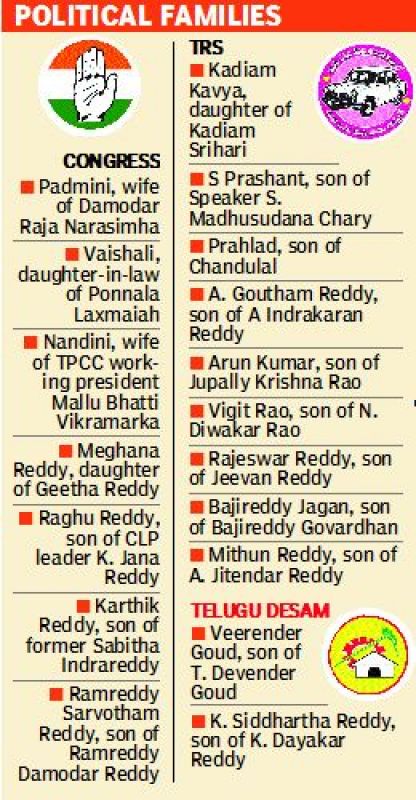 In the Congress too, senior leaders are volunteering to contest the LS elections in lieu of the party nominating their kin for the Assembly elections.

The Komatireddy brothers — Venkata Reddy and Rajagopal Reddy — want to contest for the Lok Sabha and field their wives in the Assembly elections. Similarly, former deputy CM Damodar Raja Narasimha and TPCC working president Mallu Bhatti Vikramarka are trying to get their wives enter politics.

Senior Congress leaders K. Jana Reddy wants the party to field his son Raghu Reddy for the Miryalaguda seat. But he left the matter to the discretion of the party high command. Former minister Sabitha Indra Reddy is keen on getting her son Karthik contest from the Chevella LS seat.

Another former minister Ponnala Laxmaiah seeks party ticket for his daughter-in-law Vaishali for the Assembly election as he is keen to contest for the Lok Sabha polls.

Senior TD leaders are also trying to get party tickets for their kin.