Chennai: “It’s only when we are in government that we must act in fear and caution even while doing something good. But now we are not in power, so we can boldly do even wrong/bad things. We need that courage”.

That little bit in the fiery speech in Tamil made by DMK president M K Stalin at the party general council meeting here on Sunday has stirred yet another controversy and heavy hostile trolling on social media targeting the Opposition Leader. While it's not really clear if he has really meant what he said in that well-attended ‘closed-door’ meeting, the provocative interpretation of how a politician/public figure must act while in power and out of it, has ruffled many feathers outside the YMCA grounds where the session was held. Of course, the audience lustily cheered thalaivar’s inspiring rhetoric. 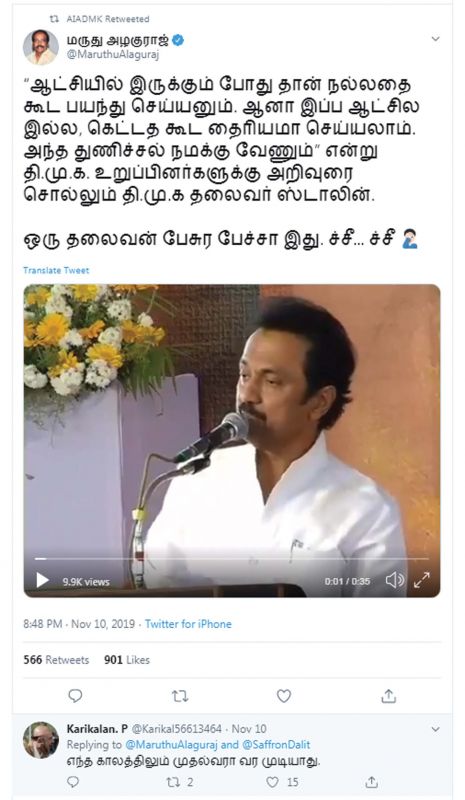 The twitteratti had a field day on the social media, slamming Stalin for egging on his followers to conduct themselves irresponsibly as they’re in the opposition in any case. Some tweeted their anguish that the DMK chief was advocating violence in public, while a few others concluded he and his party would never come to power with such a bent of mind. One post called him ‘Pappu-3’.

Stalin had attracted adverse attention for another statement he made at the same general council meet-declaring he would not hesitate to turn even a dictator if that would lead to the growth and wellbeing of the party. “I have said this before and I repeat it now”, he had said.

Perhaps Kalaignar’s son might need a rehearsal or two before going before a mike for his speech.

Philanthropists in Karnataka open their kitchens to feed the urban poor