Kamal Haasan speaks at his birthday celebration in Paramakudi on Thursday.

Ramanathapuram: Actor-politician celebrated his 65th birthday at his native Paramakudi near here by unveiling a bust of his late father D Srinivasan and announcing the setting up of a Skill Development Centre by his family to help the youth hone their skills and emerge as entrepreneurs rather than wait for jobs.

Stressing the importance of developing skills, he said he himself could manage life well only because he had known "two or three skills" - an appearance of modesty in referring to his multifaceted film-making skills. In fact, his stint in the early years working in a hair-cutting salon had helped shape his attitude towards life, said the chief of the Makkal Neethi Maiam (MNM). "A skilled hair dresser can earn about a lakh in big cities," he said.

"Skill development should grow big across the country on a scale similar to a mass movement like the Sathyagraha witnessed during the Independence movement," Kamal said, adding that his skills centre would have a university supporting it. He also said skills development was already happening in a big way elsewhere in the country, but Tamil Nadu "has not yet fully tapped the potential of skill development". 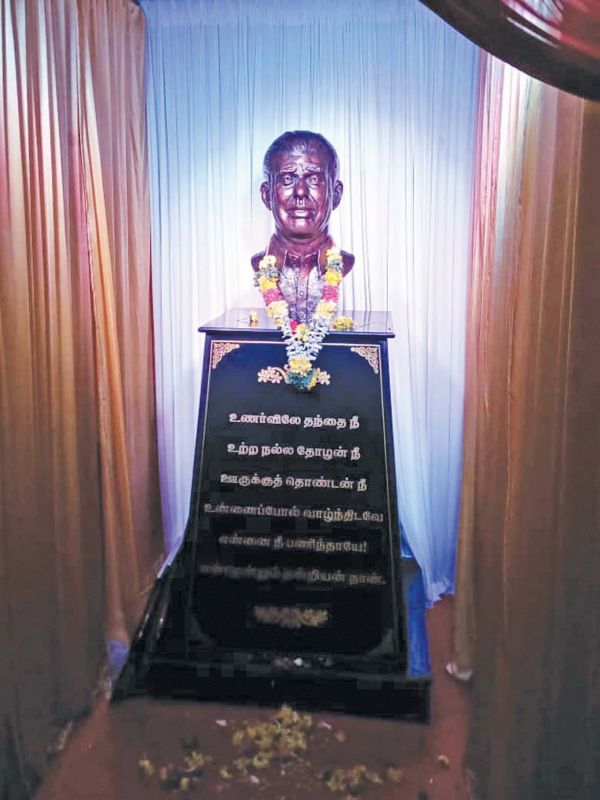 Actor unveils a bust of his late father D. Srinivasan.

The actor, who is working on his movie sequel Indian 2, said it was his desire that young people should be able to get gainful employment by honing their skills in their hometowns rather than moving to big cities in search of job opportunities.

Also, the youth should realise that no vocation was below anyone's dignity and all professions are honourable. Everyone should not seek being engineers and advocates, he said.

Paying rich tributes to his father, Kamal disclosed in his address to a large gathering of fans and MNM members that none in his family, barring his father, had supported his decision to get into politics. His lawyer-father, who had participated in the freedom movement, was for his getting into politics, he said, adding that his late father's wish came true when he founded the MNM last year.

"When my father told me I should enter politics, I expressed a doubt if there was any need for that whereas such a necessity existed when he participated in the freedom movement. He asked me what I would do if need arose. Well, the need has arisen now and that's why I launched into politics", said Kamal, insisting that his foray into politics was "not due to any shortcomings or dearth of other opportunities" but only to serve the society.

Kamal said celebrating his birthday and unveiling his father's bust - his elder brother Charuhasan also participated in it - was an unforgettable event in his life as his entire family was present, and they included the MNM members. He said the statue of his mentor, the late K Balachander, would be unveiled at his new office on Friday.

November 7 is also the death anniversary of Kamal's father Srinivasan. The actor's fans also celebrated his eventful 60-year journey in cinema beginning with his debut as a child artiste in "Kalathur Kannamma," in 1959.

'My daughter has got justice,' says Nirbhaya's mother