Kanyakumari: Raking up the AgustaWestland issue, Prime Minister Narendra Modi on Sunday attacked Congress for a string of scams during its rule and accused it of "making money" in the VVIP chopper deal as he urged the people of Tamil Nadu to vote BJP to power to usher in development.

"There was corruption in coal (block allocation), in 2G and 3G. In 2G and 3G scams, big people are present here in Tamil Nadu who indulged in so much corruption. The entire country knows about it.

"Nowadays you see on television channels and newspapers, they took money even for purchase of helicopters as well. We are not saying this, a court in Italy is saying this," Modi said without naming Congress or its leaders while addressing an election rally here.

Noting that his government has taken steps, one after the other, to end corruption, Modi said, "not a single charge of corruption" has been levelled against his dispensation in Delhi which was about to complete two years in office.

Maintaining that corruption used to take place in interviews for Central government jobs, Modi said the NDA dispensation decided to do away with interviews for Class III and IV posts, which are now being filled on the basis of written tests alone.

Read: Politics of ‘compromise’ between UDF and LDF in Kerala: Modi

"How does corruption take place. In our country, if youths want employment, they apply to the government, take examinations, then interview call comes. When it comes, he searches if there is someone known to him or if he can give some money to somebody to get the job.

"Father sells off his land, mother sells off her jewellery so that the son clears the interview and lands a job. If interview happens, then there will be corruption isn't it? So the central government decided that class III and class IV, jobs will be given on the basis of results of the written examinations. We did away with interviews and corruption went away," he said. 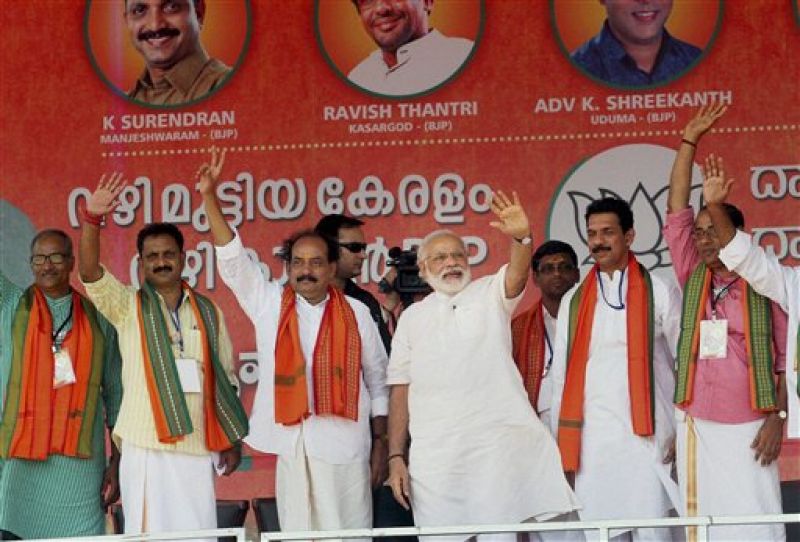 Prime Minister Narendra Modi with BJP candidates waves at crowd at an election campaign rally in Kasaragod. He was in Kerala before he flew to Tamil Nadu to campaign for his party. (Photo: PTI)

"I am working for development and I want to do development work in Tamil Nadu as well. To build the future of youths of the state, I urge you to come out of sometime this (party) sometime that (party) which is going on. Give a chance to BJP. We assure you, we will change your fate," Modi said.

"I have come to you today and this large gathering is proof....I see the victory of BJP. We will get your blessings, I can see it clearly. Vote for development, vote to change the fate of Tamil Nadu and vote to secure the lives of youths of the state," he said.