According to reports, those detained have been taken to Mandir Marg police station. (Photo: Twitter)

New Delhi: The Delhi Police on Sunday detained the students of Jawaharlal Nehru University (JNU), who were staging protest against the authorities at the India Gate here for not taking firm steps to locate their missing colleague Najeeb Ahmed.

Najeeb's sister Sadaf Mosharraf, who was also among those detained by the police, vented her ire at the men in uniform.

"We were protesting very peacefully but the Delhi Police detained us without any reason," she said.

Chief Minister Arvind Kejriwal on Sunday alleged that the Centre was adopting 'dictatorship' policy and violating the constitutional right of an individual by adopting such measures.

"Why is the Prime Minister afraid of protests? If one student is missing since the last 22 days then other students have the right to protest. This is their constitutional right and the government is trying to snatch their rights from them," said Kejriwal.

Commenting on the Delhi Police's move to summon nine people in connection with this case, Kejriwal said that the men in uniform have just done a formality in the name of investigation. 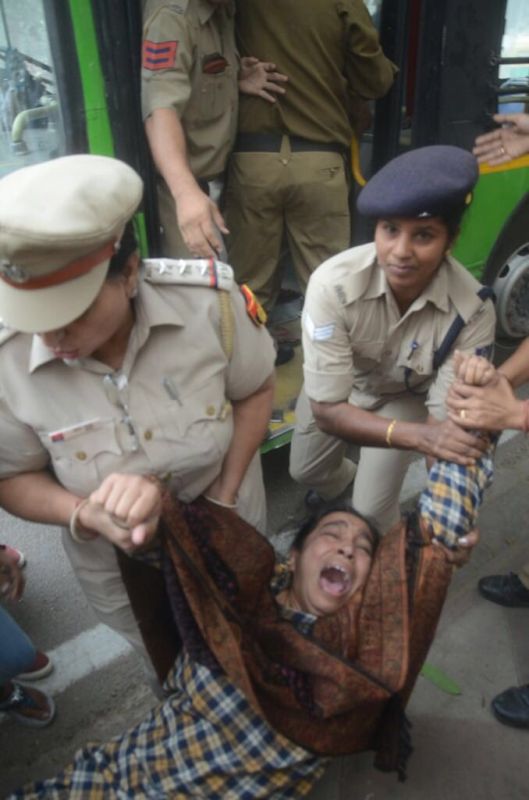 "The BJP is ruling the nation and Delhi Police is afraid of the Akhil Bharatiya Vidyarthi Parishad (ABVP). So, they didn't have the courage to call the ABVP people from past 22 days and just for formality they called few ABVP members for interrogation yesterday," he said.

Meanwhile, the Delhi Police, in a statement, said, "JNUSU had given a call today for demonstration and sit in dharna at India Gate. Delhi Police requested in writing not to assemble near India Gate as prohibitory orders u/s 144 crpc in force. NSUI, CYSS and others also joined the call.

"They were advised to assemble at Jantar Mantar. But in various groups they started assembling around India Gate despite the advisory. Delhi Police at various locations stopped the protesters, dissuaded them to move towards India Gate and were taken to Police Stations."

Speaking to the media here after meeting with the President, Kejriwal pinned the blame on Delhi Police, accusing them of refusing to take action after coming under political pressure.

The Chief Minister further said that President Mukherjee had assured him of seeking a report both from the JNU administration and the Delhi Police as well.

Last week, Kejriwal had made a beeline to the JNU campus along with other party leaders to take on the Centre over the missing student.

"The way the country has progressed in the last two years is of grave concern. Today Najeeb is missing. Tomorrow my son can go missing," Kejriwal then said.

Najeeb went missing on the intervening night of October 14 and 15 after allegedly being beaten up by a mob of 20 students comprising of the ABVP members, who had gone campaigning to his room for hostel elections.

Man hacked to death by wife's family in honour killing

TRS MPs to fight for Telangana's GST dues in Parliament