Hyderabad: The TRS, dubbed as a rural party ever since it’s inception 15 years ago, created history on Friday with its near clean sweep in the GHMC polls. It has now established itself as a pan Telangana party with impressive wins in rural, urban and metropolitan areas. TRS candidates won in bastis, posh localities, areas dominated by Seemandhra settlers, in the core city and the peripheries alike. The victory also disproves the belief that Hyderabadis were against the state bifurcation and would not allow the pink party to dominate in the city due to its cosmopolitan entity.

For example, the TD had believed that people living in areas in Cyberabad that was created by AP CM Chandrababu Naidu 20 years ago would remember the contribution and reciprocate by voting for the TD. This also proved false. Similarly the BJP, which used to be called the “Hyderabad party” due to its traditional opposition to Majlis politics and which relied on the urban vote because of PM Narendra Modi’s impact, was also humiliated.

IT minister and the face of the TRS youth in the city, K.T. Rama Rao, indeed worked hard to turn the tide in TRS’ favour.

The party which had contested for the first time in the 2002 MCH elections in 100 divisions as well as in the direct election for the Mayor’s post, had ended up with just one division (Manikyeswari Nagar) and its mayoral candidate Nayani Narasimha Reddy (the present home minister) had come a poor third. When GHMC was formed with 150 divisions and elections were held in 2009, the TRS did not bother to contest the polls stating that it wanted to concentrate on the separate Telangana movement. It also lost three Assembly seats held by it in the by-polls conducted in 2008.

Even in the 2014 Assembly elections it’s performance was poor. It won only two MLA seats out of the 24 in the GHMC area.

However, after coming to power TRS chief K. Chandrashekar Rao planned the party’s victory by inducting local basti leaders from various other parties into the TRS, besides attracting the “basti log” with his newly scripted double bedroom scheme, regularisation of house sites, and 24X7 power supply, which the citizens had not experienced in the last few years.

MIM weathers pink wave; retains numbers
In its stupendous victory, the MIM not only succeeded in demolishing the Congress, its erstwhile ally which attempted to put up a fight, but also wiped out its bitter rival Majlis Bachao Tehreek.

But more importantly the MIM opened its accounts in some divisions in the new city. What is more, the party ensured that the TRS wave did not reach its bastion in the old city. The Congress claims that the MIM would find it difficult to retain its seats this time round fell flat on its face; the Congress campaign failed to move the old city. 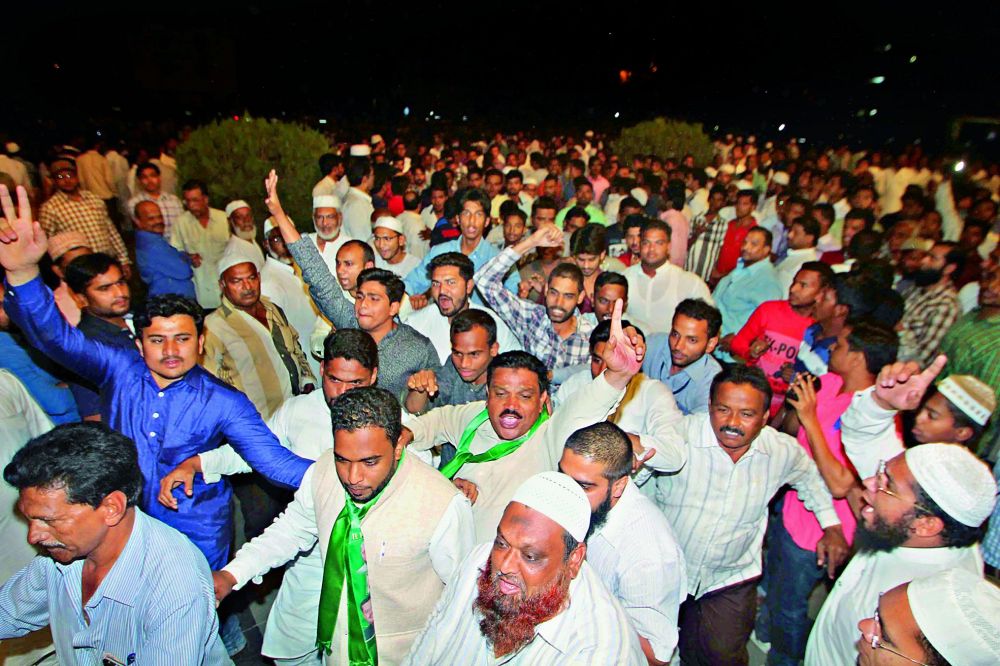 The Congress banked on Mohammed Ghouse, a former MIM corporator who joined the party recently. Party gave him, his wife and son tickets. Mr Ghouse contested from Puranapul and the clash between MIM and Congress workers in the ward on Tuesday made headlines.

The State Election Commission even ordered repolling in the division. Despite all this, Mr Ghouse and his family lost the elections. The Congress had a friendly alliance with the MIM in the 1986, 2002 and 2009 elections. After the MIM broke up with it, the Congress launched a campaign in the old city, fielding even senior leaders like general secretary Digvijay Singh.

The MIM had fielded its candidates in 60 divisions including 38 which lie in the seven Assembly segments where it has sitting MLAs. Of these, the party has bagged 37 divisions.

It spread its wings a bit, winning two divisions each in Jubilee Hills and Rajendranagar Assembly constituencies, which are represented by the TD, and Goshamahal which is with the BJP.  The MIM won the Shaikpet ward, which is near the IT zone and Bholakpur in Secunderabad, apart from regaining Erragadda division. The Majlis Bachao Tehreek which had won from Azampura in 2009 failed to retain it. Mr Amjad Ullah Khan, the lone MBT corporator, gave his Azampura division to his wife and moved to Akbarbagh. Both of them lost the polls.

Amarinder Singh says will launch his own party, open to seat arrangement with BJP

No need to speak to me through media: Sonia Gandhi to G-23 leaders