Hyderabad: In a strongly worded reply to BJP national president Amit Shah’s letter to him, AP Chief Minister N. Chandrababu has exposed the “blatant lies” in it.

In his reply, Mr Naidu said that in the last four years not a single assurance was implemented fully by the central government. “BJP has not shown any special favour to AP, and the funds were released as per 14th Finance Commission’s recommendations,” Mr Naidu wrote.

He accused the BJP of being partial to states the party ruled. The central go-vernment funded the Delhi-Mumbai corridor whereas Andhra Pradesh has been asked to borrow funds from the ADB for the Vizag-Chennai industrial corridor.

Mr Naidu wrote that the present weak finances of the state are due to unscien-tific and arbitrary division of the state for which the BJP is equally responsible.

He replied to every point made in Mr Shah’s letter. He debunked Mr Shah’s cla-im that massive resource allocations were made to AP over the last four years, and that already most of the promises made in the AP Reorganisation Act are poised for fulfilment.

Regarding resources, Mr Naidu said 42 per cent devolution of finances to the state is based on the recommendations of the 14th Finance Commission and no special favour in allocating funds has been done to AP beyond the recommendations.

Regarding establishment of educational institutions, Mr Shah in his letter had said that the central government had established these institutions and made them functional in three years, much before the targeted year 2022, and questioned if this was not being sensitive to the needs of AP? 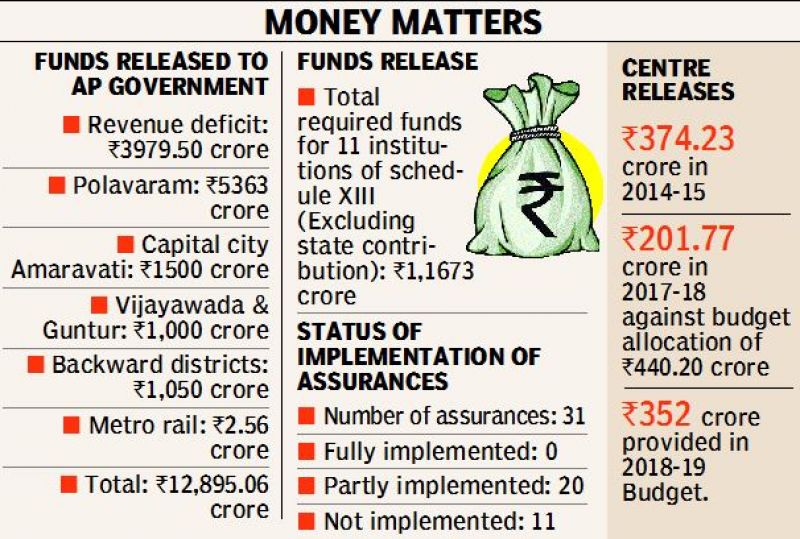 Regarding infrastructure projects, out of eight only three projects have been partially implemented. In the case of the Vijayawada and Vizag metro rail project, Mr Naidu wrote that it was not proper to return the Detail Project Reports (DPRs) for examination under the new metro policy as the two metros in AP are governed by the AP Reorganisation Act.

Coming to the special category status issue, Mr Naidu wrote that a number of representations were made to the central government. Union finance minister Arun Jaitley had said that based on the 14th Finance Commission recommendations, special category status could not be given to AP, but former chairman and members of the 14th Finance Commission had stated that they did not make any such recommendation, Mr Naidu wrote.

BJP, TMC in war of words over number of legislators seeking to change sides

India will not have R-Day chief guest due to global coronavirus situation: MEA