Bellandur is new ‘IT’ factor here!

Majority of the people residing in Mahadevapura depend on the private water tankers, there is no proper roads, constant traffic congestion, disrupted power supply and rise in dust and pollution levels and many more.

Bengaluru: The name Mahadevapura rings a bell as it is a hub a for various IT companies and tech parks. The sudden boom in Real Estate has put Mahadevapura on the map and is populated with people who have migrated from different parts of the country for jobs. It is also one of the highest tax paying constituency in the state.

Mahadevapura constituency which is a reserved category for SC/ST has been ruled  by senior BJP leader Arvind Limbavali for almost a decade, yet people are not satisfied with the developments.

When asked the general public about the developments in Mahadevapura for 10 years, they lamented that there is nothing much to talk about. Their basic demands for proper roads, constant supply of water and power and none of them were looked into with priority.

At the same time people also stated that it was only during Limbavalli’s tenure, they saw developments. Earlier, there were muddy roads, no proper street lights, no proper drainage system. But now the roads are asphalted, drinking water facilities has been provided, drainage and sewage systems are in place, parks are being developed and many more developmental works are in progress. 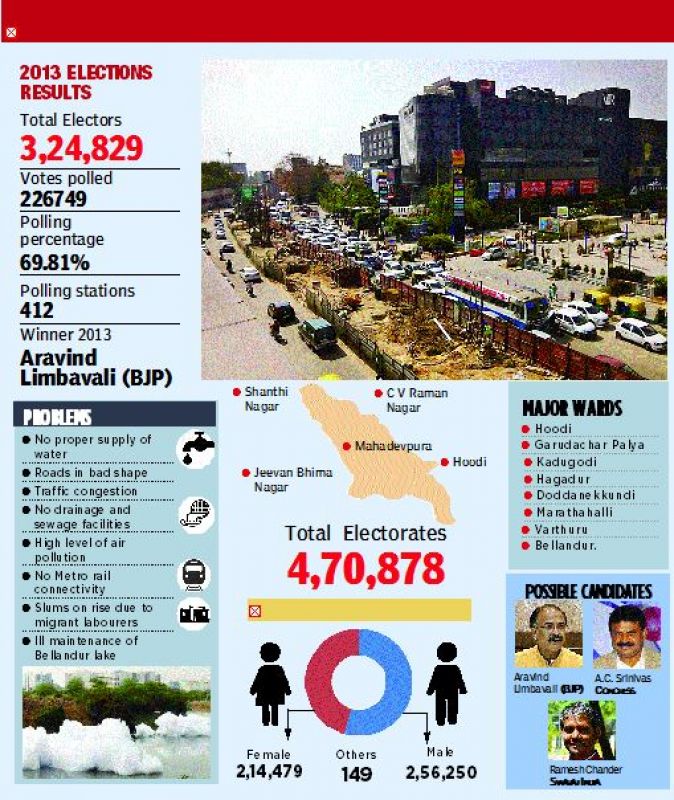 Mr Limbavali is clearly working hard to retain his position in Mahadevapura constituency for the third time. He has no stiff opposition either from the Congress, Janatha Dal (S) or any other party. But Limbavali is not taking it easy and is working to ensure that people do not vote for a new person. He is aware of the fact that the general public might vote against him as they want a change and for a new person. But Mr Limbavali is firing from all guns by assuring rapid developments in the constituency.

Mahadevapura is known for several IT hubs and tech parks and has educated voters and the registration of voters has increased when compared to the previous registration process in 2013.

Majority of the people residing in Mahadevapura depend on the private water tankers, there is no proper roads, constant traffic congestion, disrupted power supply and rise in dust and pollution levels and many more.

Vineeth Gowda, a techie and a resident of Doddanekundi, said, “We have constant problem of water and electricity but every time when our voices are raised, it is subdued by false promises. The area is run by private water tanker mafia and most of them depend on these tankers, which charge exorbitant rates especially during summer season.”

Mr Gowda also added that a slight drizzle and wind will leave the entire area powerless. “The residential areas and apartments face severe power cuts and have complained repeatedly but has fallen on deaf ears. Once there is a power cut , we do not know when will the power be restored,” he mentioned.

Meanwhile, Suhahsini Joseph, a home maker and a resident of Marathalli, said, “ We haven’t seen much development and this calls for a new face and we want some one who can work for the people. Take the example of Bellandur lake which has been a burning issue but no action has been taken, it is the BBMP blaming BDA, who in return blame the water board. But the current MLA has been mum about the issue, he could have taken up the issue and brought in effective measures but failed to do so.”

She also added about the traffic woes and bad roads are another set of problems, which is completely out of control and no measures are taken to tackle the issues. “It is one of the highest tax paying constituency and there is no proper public mode of transport. We should have got the metro rail connectivity due to the IT hub but in vain,” she mentioned.

Meanwhile, a few of the people residing in Marathalli and surrounding areas claimed that it was only due to Limbavali that they have seen development. “Ten years ago, no one knew Mahadevapura. It was only after Limbavali was elected the tech parks came in, gated communities and apartments gave rise to land values, people from various parts of the countries started investing in different business in this area. Gradually, Mahadevapura is known for its software companies and this is only because of Limbavali,” they claimed.