CHENNAI: Chief secretary to the state government  K. Shanmugam said on Friday that despite repeated efforts by the state to seek more financial assistance for disaster management and relief, the Central government's assistance was not adequate.

While the Centre is "expanding" its financial window to states, Tamil Nadu's experience in recent years has been one of inadequate assistance, Shanmugam said inaugurating a seminar here on 'Humanitarian assistance and disaster relief exercise, 2019, on cyclone and urban flooding'.

The seminar was organised by the Tamil Nadu revenue department and disaster management authority and the Indian Navy.  Shanmugam earlier lit a traditional lamp to inaugurate the deliberations.

However, Shanmugam said even if Central assistance was not forthcoming to the extent it should for a big coastal state like Tamil Nadu, which has been vulnerable to several cyclones after the 2004 Tsunami, "we should not be complacent". The state has been pooling all its available resources to mitigate such situations and will continue to do so, he stressed. 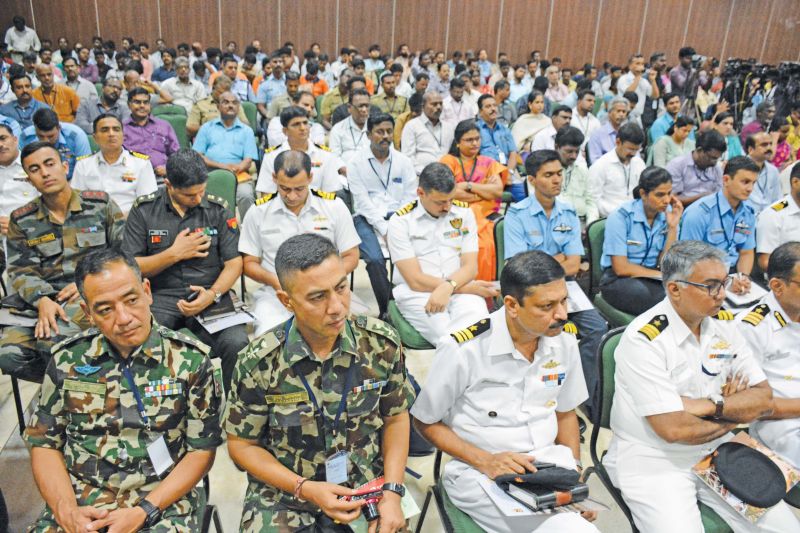 A section of the audience, which included several personnel of armed forces besides Central and state officials. (Photo: DC)

Significantly, Chief Minister Edappadi K Palaniswami and Deputy Chief Minister O. Pannerselvam have also been airing similar concerns on Central assistance for disaster management and relief to the state having fallen short of its requirements continuously in the last few years in the wake of cyclones like 'Ockhi' and 'Gaja', for example.

In the case of the 2004 tsunami, Shanmugam said the government never thought that rising sea levels "would swallow so many people". Even during subsequent cyclones like 'Ockhi' for instance, the speed with which it hit the Tamil Nadu coast was so fast that the administration did not have sufficient time to prepare for that kind of eventuality. In the last cyclone, because of the excellent preparedness, Tamil Nadu was able to minimize loss of human lives but the state could not minimize damage to property. Thus, "we have learnt several lessons," he said.

Shanmugam said that though nature could not be conquered, the fallout of natural disasters could be managed and the idea of preparedness was to "help us create a system", which enables swift and accurate response, ensure effective communication among all stakeholders, and make use of all resources available. Reaching out to fishermen in time was vital, the chief secretary underscored.

Commending the sharing of experiences and knowledge from disaster management which has now gone beyond national frontiers to enable better response the next time, Shanmugam said in disaster mitigation and relief it was a must to have "role preparedness" in place- what is the role each one including volunteers would play, whom should they contact and so on in the event of anything untoward happening. Clean-up of water bodies to enable larger rainwater harvesting was another important aspect, he underscored.

You are a fighter who will overcome this challenge: PM Modi to Boris Johnson

India thanks UAE for providing shelter to Indians stranded in Dubai

KTR to Pawan Kalyan: Call me brother, not sir