Bengaluru:  The Congress threw its doors open to Hosapete strongman Anand Singh on Wednesday, when he formally joined the party with great fanfare in the presence of Chief Minister Siddaramaiah, KPCC chief Dr G. Parameshwar and other senior leaders. But while the former BJP minister's front door entry is expected to deal a huge blow to the saffron stronghold in mine-rich Ballari, the former stomping ground of indicted BJP mine baron Janardhan Reddy, it may also prove embarrassing, given that it was the CM's rally against the BJP's involvement in the iron-ore scam that brought the Congress back into the reckoning in the state.

While Congress stalwarts like KPCC chief Dr. G. Parameshwar praised the former BJP minister Mr Singh as a mass leader, Congress MLC, K.C. Kondaiah walked a  fine line when he said that the party had nothing to do with the cases that are still pending against Mr. Singh, and then added, "we will not dilute the cases." There are strong indications that Congress stalwarts in Ballari are not comfortable over sharing space with Mr. Singh, who only recently resigned from the BJP and the Legislative Assembly.

Mr Singh reportedly decided to join the party only after he was offered the Hosapete ticket for the elections with strong reports that it was Labour Minister, Santhosh Lad who played a key role in bringing him into the Congress.

Having been to jail twice in the past on charges of involvement in  the Belekeri iron ore export scam, Mr Singh is currently out on bail but continues to face charges related to the iron ore scam.

In an apparent bid to win at all costs, the Congress is reportedly preparing to induct   two more BJP MLAs, T.H. Suresh Babu ( BJP MPSriramulu's nephew) and H. Nagendra after AICC president, Rahul Gandhi's visit to Karnataka on February 10. Mr Singh's first litmus test will be to make a success of Mr Gandhi's rally in Hosapete, to rub home the less than warm reception that BJP leader B.S. Yeddyurappa received there recently during his Parivartana rally. "He is aware of what is expected of him," said Mr Singh's close aides.

Singh in, but no ‘Anand’ for some?
The induction of Mr Anand Singh into the Congress is reportedly part of Chief Minister Siddaramaiah's strategy to  neutralise the possibility of a hung assembly by making  sure the party has enough candidates with a winning edge to field in the coming Assembly polls.

"He is doing everything possible to get a simple majority in the April/May assembly elections and  has confided in  a few national general secretaries about his strategy. He has advised the central leadership not to raise unneccessary queries about the antecedents of the likely candidates he chooses to bring in," say party sources. 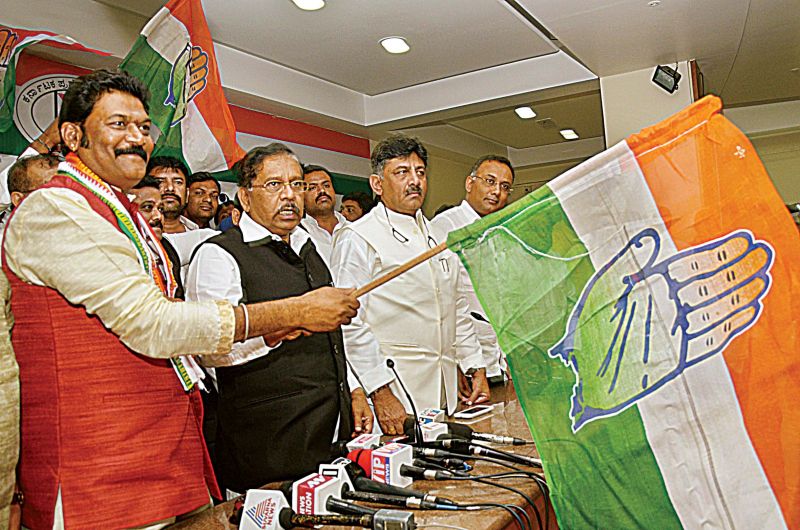 Hosapete MLA Anand Singh waves the Congress flag after he was inducted into the party at a programme at the KPCC office in Bengaluru on Wednesday.

In fact some pre-poll surveys have al;ready hinted at  a hung Assembly claiming that in such a situation, it will be former prime minister Mr Deve Gowda’s Janata Dal(S) which will play kingmaker. Currently, the Congress has more than 120 seats in the Assembly

The Congress leadership has therefore decided to throw its weight behind Siddaramaiah where Singh's induction is concerned although he has been to jail not once but twice and is still facing illegal iron ore export charges, they reveal.  "Mr Siddaramaiah takes potshots at BJP national president, Amit Shah and it state unit president, B S Yeddyurappa, calling them jailbirds. And the party came to power in Karnataka virtually  on the single point agenda of doing everything possible to dismantle the illegal mining nexus in the state. But now it is inducting leaders,  who were involved in the mining scan. This could deprive the Chief Minister of a moral edge over the BJP, especially as both he and Congress president, Rahul Gandhi will share a dais with a jailbird at the Hosapete rally," notes a  party insider.

But the Congress leadership, it appears, is willing to take this risk to avoid losing power in Karnataka.

Bookies give hairline edge to TRS over BJP in photo-finish

Only BJP has guts to rename city as Bhagyanagar: Yogi