According to PWD sources of the entire 32 districts as many as 21 districts had reported 60 per cent deficit of rainfall during the northeast monsoon.

A drive along the riverbanks of Palar, Gadilam, Vaigai, and Coleroon also revealed that the rivers had gone dry early this year. The PWD sources also confirmed that of the entire 32 districts as many as 21 districts has reported 60 per cent deficit of rainfall during the northeast monsoon. Of this, 21 districts, 16 districts serve as the catchment area for 80 percent of TN dams and check dams, the official said pointing out that chief minister O. Panneerselvam told the Central delegation that the overall water storage of TN has reduced to less than 13 per cent and this by February will further dwindle to single digit as the surface water has completely dried along rivers resembling desertification. 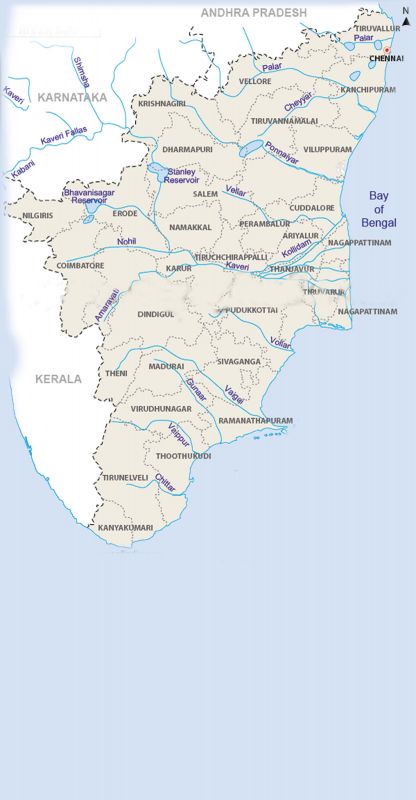 The sown areas will again result in a yield of less than 30 per cent. Further sugar cane and horticulture crops had also been a large failure due to ground water scarcity. Though the total net sown area of Tamil Nadu is now around 42 lakh hectares, less than 40 percent is only now cultivable, he added due to depletion of surface water.

For bird lovers of Tirunelveli district, 2017 is likely to be  a more disappointing year, as almost all the tanks in the Tamirabarani wetlands that support water birds migration from far away countries have completely dried up.

According to the water bird count in the year 2014 in around 40 tanks in Tirunelveli and Thoothukudi districts, around 45,000 migratory birds belonging to more than 60 species have been recorded.

“The number of birds may go down further this year,” said M Mathivanan, the coordinator of the seventh edition of ‘Tamirabarani Water Birds Count 2017’, which is to be organized for two days from February 4.

Mr. Mathivanan added that “waders like the Lapwing, Sandpiper and Stark may be sighted this year and birds of Duck species cannot be expected due to lack of water in the tanks”.