Yakshagana: When Yakshis add sparkle to the night

Anyone who has seen a Yakshagana performance would know that the songs are sung by the bhagavata to the accompaniment of cymbals with fellow artistes playing the mridangam and chande in a rhythm rooted in classical music.

In the back to back tributes that were paid to Girish Karnad, Kannada litterateur and playwright and actor extraordinaire, there was one remarkable aspect of his growing up years in Sirsi that stood out - how as a young boy, growing up in a town that had no electricity and barely any entertainment, the  dance drama that has held generations of Kannadigas in thrall, would inform and educate Karnad into the intricacies of performance art. Across more than five centuries, Yakshagana, the dance drama which has enthralled and mystified with its magical story telling style, has carved out a unique niche for itself in the world of Indian classical dance and art forms. In the villages of Uttara Kannada and Dakshina Kannada, people watched spellbound, as the larger than life artistes with their impressive head gear and painted faces, enacted stories from the epics, bringing the Mahabharata and Ramayana to life in a language interspersed with lyrics  which they could easily identify with. Yakshagana’s profound influence on literary and theatre legend Girish Karnad was little known until he once told Marathi playwright Vijay Tendulkar how Sirsi, a small town in Uttara Kannada district where he spent his early childhood, and Yakshagana, influenced his sensibilities as a writer. In his autobiography, he devoted substantial space to both. Another legend and Jnanpith award winner Shivaram Karanth too was influenced by Yakshagana and even opened a school to train budding artistes. He experimented with Yakshagana and took this art form to different corners of the world. But has this dance-drama been able to evolve and match the sensibilities of a modern  age? Or have too many experiments taken away the age-old charm of Yakshagana leaving its ardent admirers wondering if the intrinsic beauty of the art form is being destroyed? BHASKAR HEGDE and GURURAJ A. PANIYADI study the evolution of Yakshagana, the changing trends and whether the art form which inspired Karnataka’s greatest sons in theatre, will have much the same draw for generations to come.

There was a time when an aata (a Yakshagana performance based on one composition) would take place on an open air stage with men dominating the show but the times have changed with girls and women artistes making a mark. The narratives for the compositions are borrowed from epics like the Ramayana, Mahabharata and puraanas. Generally the colour and design of the attire and the make-up the various characters don, are universal and readily identifiable.

Anyone who has seen a Yakshagana performance would know that the songs are sung by the bhagavata to the accompaniment of cymbals with fellow artistes playing the mridangam and chande in a rhythm rooted in classical music. Artistes playing different roles, dance when the bhagavata sings and start the dialogues once the singing halts.

There is no script in Yakshagana-the artist delivers the dialogue spontaneously, replete with scholarly thoughts which enrich the thoughts of the audience and provide new insights into the philosophical moorings of life.

In times in the past when people had no access to other forms of entertainment, Yakshagana was the only art that entertained them or rather helped people evolve their artistic sensibilities. Karanth and Karnad were living testimonies to this. But then the winds of change are sweeping across entertainment modes with hi-tech gizmos, fast paced music and mind-boggling dance forms capturing the imagination of the cosmopolitan populace. People of Dakshina Kannada, Udupi, Uttara Kannada and Shivamogga where once Yakshagana held sway, are  not immune to these new modes . 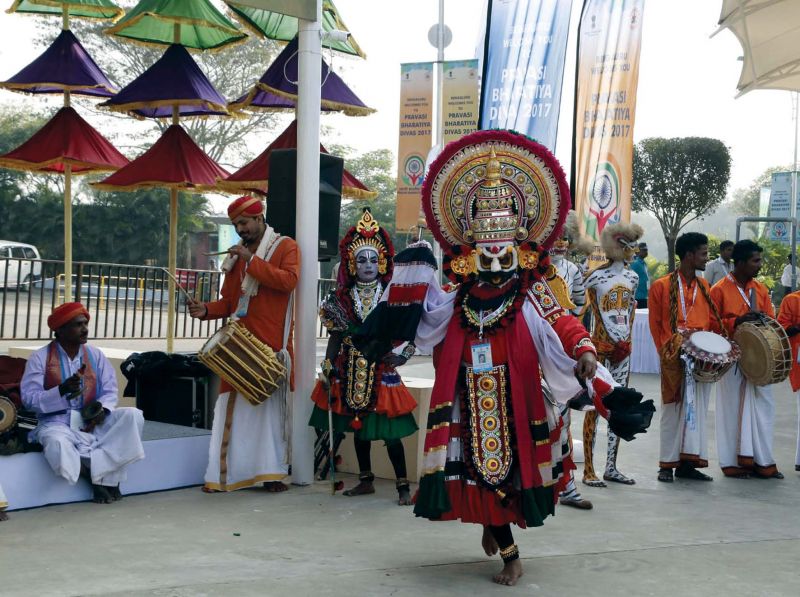 One always has the liberty to choose the art form or programmes one wants to see-on TV or on the mobile phone and local and traditional art forms like Yakshagana are inevitably the first casualty. There are still connoisseurs who would not dare miss a performance of a Yakshagana artiste in their  town but their numbers are dwindling fast with the nostalgia for this old world art fast diminishing. Which brings up the troubling question: Can Yakshagana which once sparked creativity in Karanth and Karnad, retain its magical influence now?

The dance form is changing no doubt, it is now performed in other languages including Hindi and English with several schools in coastal Karnataka conducting Yakshagana classes and organisations and individuals teaching the dance-drama form. Just like karate, martial arts and Bharathanatyam, Yakshagana too continues to attract many in the younger generation.

There are even Whatsapp groups on Yakshagana where audios and videos of the art form are shared and interesting discussions are held. Karnataka Yakshagana Academy chairman, Prof M.A. Hegde for one, staunchly believes that this is no dying art despite the invasion of ‘instant entertainment’ forms. “I can give you an example. Every year, we  conduct training camps  and last year and the year before that, we saw a number of young people  coming for training in our camps. The number was so huge that  we could not accommodate all of them,” he says.

In Dakshina Kannada, the form continues to be vibrant because of harake aatas sponsored by people seeking fulfilment of their wishes. ‘Gana Vaibhava,’ a form of Yakshagana is quite popular during functions. Yakshagana teams in Kateel and Mandarthi are booked for about two decades! Other teams too have good bookings.

But there is  a subtle change in the art form  and whether it is for good or bad, only time will tell.

“Earlier a Yakshagana performance would make people think. But now people go for a Yakshagana show just for the entertainment it provides, nothing more,”  former V-C of the Folklore University, K Chinnappa Gowda told Deccan Chronicle.

There are many experiments being done in Yakshagana. “Deviations are happening in the dance form because of the pressures of modern times  but I feel they may not last long. People are already saddened by the changes and are demanding a return to the traditional performance style. I feel any experiment should be only an addition to tradition and not a deviation,” he stresses.

The calibre of the artiste too makes a difference. “Yakshagana artistes like Sheni Gopalakrishna Bhat and Malpe Samaga knew every character and their dialogue delivery made people think and introspect on the character. But the number of such artistes has decreased over the years,” Prof. Gowda adds nostalgically.

Geeta Hegde Salkani who has been performing for over two decades, concurs with Prof. Gowda. “It is unfortunate that of late, many artistes deliver the same dialogues again and again. If we watch one prasanga (display of an aata) at one particular place, the same is repeated elsewhere. This has virtually killed spontaneity and innovativeness,” she says.

Yakshagana Academy chairperson, Prof M.A. Hegde succinctly sums up the plight of the art form. “The number of artistes has increased over the years but their impact has dimnished. Earlier, artistes would take up Yakshagana as a profession but now, it is only a hobby, nothing more and the level of dedication is much less,” he says.

The harake aaata too have seen a change over the years and many a time, the same prasanga is enacted repeatedly. “Earlier people would come to us with prayers to offer to gods. We would suggest the ‘prasanga,’ (plot) and they would sponsor it. For example if a devotee comes with a prayer for a child, we would suggest ‘Putra Kamesti or Kamsa Vadhe’ prasanga. For marriages, it would be Swayamvara Parvathi prasanga or for those with problems, we would suggest Nala Damayanthi prasanga. But now people themselves pray and vow to offer Devi Mahathme prasanga. Devi Mahatme has a good message but if the same prasanga is held repeatedly, the same message would be repeated. Different prasangas give new messages to the people,” explains Kateel temple hereditary archak and Sri Durga Makkala Mela chief Sri Harinarayana Dasa Asranna.

In contrast to harake aata is tent aata. Troupes go places to perform different prasangas and engage in conversations to attract more spectators. Keremane myaala is one such troupe that did wonders in the past. “But Tent aata too has declined as there are no popular troupes anymore. We lack dedicated artistes. For example, a classical music student undergoes 12-years of training  in the ITC Sangeet Academy in Kolkata. We lack such an intense training atmosphere here. Those who join our schools are not serious because their families think going to a Yakshagana school is only a means of earning money. They want to finish three months training as fast as possible and  join a troupe.  I personally feel an individual needs at least three years’ training to become a good Yakshagana artiste. So it is difficult to say where we are headed. The Yakshagana schools lack funds too. If we have an attractive scholarship system, we can attract students for long duration courses and train them properly. Schools lack funds and governments too do not support the dance form anymore. It is not difficult to say if Yakshagana has a bright future or not,” says Keremane Shivananda Hegde who runs a training school at Idigunji in Uttara Kannada.

When gejjes get the women stomp
The glass ceiling was broken long back with women and young girls increasingly learning Yakshagana. Mayuri Upadhyay, an established artiste, feels women are becoming Yakshagana adherents not just for the sake of making it a hobby. “Many have other careers, many are home makers. But they are entering this field and proving their mettle with dedication and hard work. Mahila Yakshagana is no doubt fast evolving,” says Mrs Upadhyay. Geeta Hegde Salkani point out that women who want to learn this art form need to have a lot of stamina. “You need to have the energy of an athlete and excellent  command over the language, mythology, and history. Yet women employed in different fields, are attracted to Yakshagana and want to become accomplished artistes,” she says.

All eyes on 10, Janpath after high drama in Congress in Rajasthan

E-auction of over 1200 mementos, gifts presented to PM Modi begins

Karnataka BJP MLA snaps at woman, gets her detained for asking questions