Fire that broke out at a shopping complex in East Fort in Thiruvananthapuram on Sunday afternoon. (Photo: PEETHAMBARAN PAYYERI)

Thiruvananthapuram: A major fire that broke out inside a closed airtight textile godown in the back row of the Rajadhani Building near the Padmanabha Swamy Temple in East Fort here on Sunday was brought under control after a nearly four-hour joint operation by Fire and Rescue Services and the police. Nearly 20 fire engines were pressed into service, including two from VSSC and the ultra-modern fire engine of Airports Authority of India, Rosenbauer Panther.  The godown of the textile unit (Richmond Uniforms), where the fire is said to have erupted, has been fully gutted.

Officials said the cause could have been a short circuit, it is said that some employee had forgotten to unplug an electric iron. The warehouse of textile retailer Pothys, whose second floor lies adjacent to the uniform unit, too had suffered severe damages. The flames had also rushed into the roof-top restaurant of Park Rajadhani, causing serious cracks on the floor and its heritage roofing. No casualties were reported. The extent of damages is yet to be ascertained. 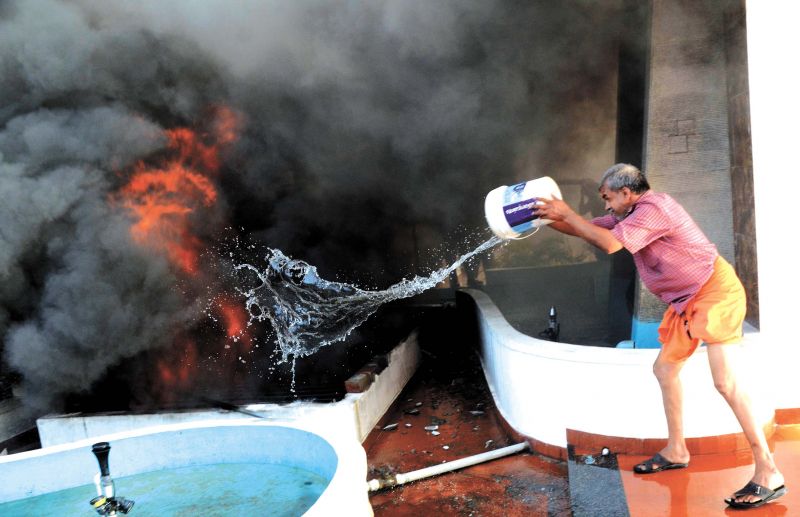 (From left) A senior citizen tries to douse the fire that broke out at a shopping complex in East Fort in Thiruvananthapuram on Sunday, Almost all the fire engines, including the sophisticated ones from the airport, reached the spot to meet the emergency.   (Photo: PEETHAMBARAN PAYYERI)

It were the employees of Pothys who had called the Fire and Rescue services just after 4 p.m. The rescue team arrived swiftly but found that the entry was closed. They did not force open the entrance door as it was feared that the fire might burst out into the thoroughfare. Fire and Rescue officials then climbed the three-storey height of building on a ladder, pulled up the fire engine hoses, and tried to douse the fire. 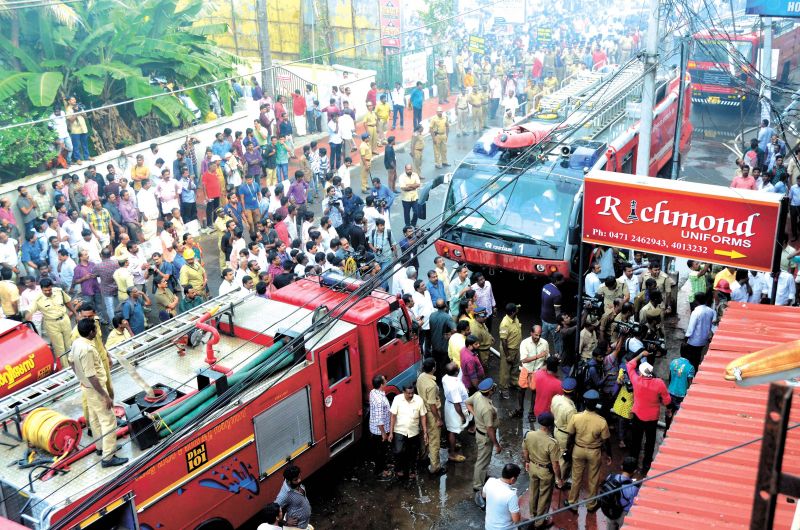 The godown, which had aluminium roofing and hollow-brick sides, was cramped into the third floor of the building. Burning inside were uniforms made in cotton and polyester, both of which are highly inflammable. When rescuers landed on top, the structure had started fuming. The heat pressure inside had become too intense that minor explosions could be heard, and dense dark smoke escaped through cracks that were bursting open. When no amount of water on the roofing was having any effect, rescuers broke open the glass windows to let out the steam in small doses.

Workers standing on the roof-top of Rajadhani Park overlooking the burning structure tried to crack open the roof from the top throwing stones and pounding the roof with long iron sticks. Soon enough fire surged towards the roof-top of the hotel, forcing people gathered on top to rush to safety. The marauding flames damaged the floor and roof.

By then innumerable hoses from almost 20 fire engines were pulled up to douse the fires inside the uniform godown and the warehouse of Pothys. The mission was slowed-down a bit by water shortage but the issue was promptly solved by sourcing water from the Padmatheertha Pond nearby. Fire engines carried water from the pond and filled the tank of the powerful Rosenbauer Panther  which fed the pump hoses that doused the flames.

When one of the capital’s most vicious fire broke out, the administration was caught napping. The lack of enforcement, too, was also exposed in the fire mishap. Sources said nine fire engines of Chenkalchoolah, the nearest Fire and Rescue unit, and three tenders in the Chakkai unit, the next nearest one, were in a state of disrepair. "As a consequence, the rescue mission was slowed down because tenders that finally arrived had to travel longer distances,” a top Fire and Rescue official said.

What’s more, the ones not fit to use in Chakkai included a crash tender, a specialised ultra-modern fire engine. Eventually, Airports Authority of India's Rosenbauer Panther had to be brought in. “We have been frequently seeking money for the revival of these engines and nothing has happened till now,” the source said.

Adding to the woes, none of the ‘leading firemen’ (those with more than 10 years experience) posted in the city were available for service. All of them were in Thrissur, attending a training programme. The absence of these leading firemen, it is said, had caused some confusion before locating the seat of fire (fireman’s jargon for the point where the fire originated).

The fire also revealed that the buildings that had been affected had violated basic fire and safety rules. These buildings had none of the mandatory preventive requirements like fire extinguisher, reel hose, smoke sensor, automatic sprinkler and even a fire alarm. Though they are supposed to renew their licences annually, the source said that this too had not been done.

Groupism during polls should not continue after being elected to power: Kerala CM

Country likely to receive above normal rainfall in Sep: IMD