KOZHIKODE: “Greater understanding of our sociological and cultural problems, more enlightened and harmonious acceptance of a fusion of values, an enviable measure of tolerance and spirit of co-existence must be also the visible contribution of the new University, apart from academic excellence”. This was how C.H. Mohammed Koya, then education minister who is credited with the formation of Calicut University, laid out his vision before its syndicate which met for the first time on November 2, 1968. It would be a question in the minds of many whether the university has lived up to the vision when Chief Minister Pinarayi Vijayan officially launches its golden jubilee celebrations at Thenjippalam on Saturday.  Especially that the university had the fortune of being guided in its early years by such people as C. Achutha Menon and K.P. Kesava Menon, who were instrumental in establishing this higher education institution  in Malabar.

Calicut University was established bifurcating Kerala University (founded in 1937 as University of Travancore in the erstwhile princely state of Travancore) through an ordinance on July 23, 1968. Calicut is the largest state varsity now with over 3.5 lakh students enrolling every year and has over 430 affiliated colleges with the jurisdiction over five districts. Over the last 49 years, the varsity awarded 11.82 lakh bachelors, 1.6 lakh masters, 2,236 Phds and over 5,000 other certificates. “One of the major contributions of the University in the last five decades has been that it has helped the backward communities in the region to understand the importance of higher education and made them realise that higher education is something which is needed in their life,” opined M.N Karassery, social activist and thinker who was a student, research scholar and a teacher of the university who retired as head of the Malayalam department. “It’s impact was felt especially in the Muslim community as it made them wake up to the reality of a modern world with a new outlook.” 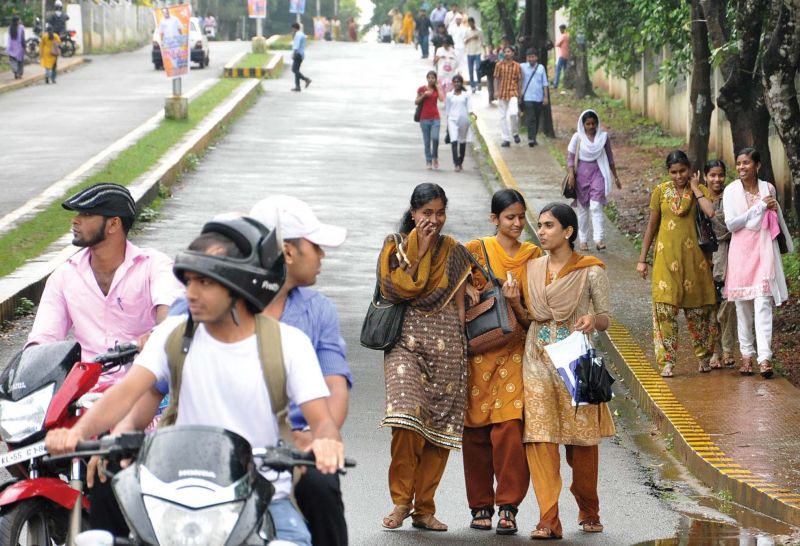 Students on the campus. (file pic)

The university came into being at a time when the Muslim community had turned its back on women’s education and learning English. “The university inspired them to come forward and claim their own space as hoped by C.H Muhammed Koya,” Prof. Karassery said. One of the best things that have ever happened to the university is said to be the selection of its first vice-chancellor. Prof M.M. Gani steered the university though its initial years and this period (1969-1975) is often considered the golden period of the varsity. “The initial glory of the varsity, however, did not last,” said Prof. Karassery. “While Prof. Gani was an academician above all politics and was accepted by all, many of his successors were picked up merely because of their political affiliations which in turn brought the standard of the varsity downwards.”

“I joined here as a student in a glorious varsity, but when I retired from here, there was not so much glory left in it,” he said. Dr M.G.S. Narayanan, who was part of history department (then Kerala University) even before the creation of the varsity, opined that the university never reached the level of a varsity that is expected to do as far as academics are concerned. “It has been marred by the political parties who wanted to show their influence in almost all matters,” he said. “C.H. Mohammed Koya was a very honest man who wanted to bring real changes with the varsity. On the advice of former Kerala University P.V.C. Dr N.A. Kareem, he brought Prof Gani to the varsity. Prof Gani never applied for the job nor went behind ministers with biodata for the post unlike many others. During his period, the university got really good academicians based on their merit.”

Dr Narayanan said there must be a serious restructuring on the university acts as at present the varsity, like similar other varsities in India, has no nature of the real university concept. “No serious research is happening here like those in western countries,” he said. “Even the concept of examination here is against the principles of higher education. That’s why better researchers are leaving to other countries for their research.” Over the years, the varsity has also witnessed a lot of protests, mostly conducted by the employees. “It is the employees who are ruling the varsity at their will,” MGS opined. “Prof. Gani’s concept was that a university is for the students first, then teachers and later other employees,” said Prof. Karassery. “However now it is the other way round now.” A senior faculty member concurred with the veteran academicians. “I don’t have a great opinion about the academics of the university,” he said. “I don’t want to comment further because that would hurt others.” Most academicians hope the golden jubilee offers the university an opportunity for introspection and device means to live up to the vision with which it was established.

Country likely to receive above normal rainfall in Sep: IMD