BJP leads in Gujarat Assembly elections
Nation Other News 29 Jun 2019 The day that India t ...
Nation, In Other News

Bengaluru: When 22-year-old Captain Vijayant 'Robin' Thapar left his home before being dispatched to fight in the Kargil war, the prescient young man, foretold his own end. He set out anyway, writing his father a letter before he left.

“By the time you get this letter, I will be observing you all from the sky, enjoying the hospitality of apsaras. I have no regrets; in fact, even if I become a human again, I will join the army and fight for my nation. If you can, please come and see where the Indian Army fought for your tomorrow.”

Two decades later, on June 29, 2019, Colonel (retd) V.N. Thapar stands, as he does every year, at the spot of his son's martyrdom. The army veteran, who spoke to Deccan Chronicle on his son's 20th death anniversary, says he received the call when he was in Alwar, on court marshal duty, on June 29, 1999.

“I was on a tea break, when I got a call from the Army headquarters, telling me my son was in casualty." The stricken father believed his son had been wounded.

"I learned later that he had been martyred,” Colonel Thapar recalls. "He was martyred at the age of 22. This is my 20th trip."

Captain Vijayant Thapar had led the attack on an impossible feature called the Knoll. Determined to honour his son's final wish, the retired colonel has made it a point to visit the spot of his son's martyrdom every year since his passing. He recalls that 'Robin' who was named after the Vijayanta tank, played music from the film Border, to pep up his unit. Commissioned into the army on December 12, 1998, the young fourth generation officer, joined the prestigious No 2. Rajputana Rifles in Gwalior and was involved in counter-insurgency operations in Kashmir. There, he and his unit were ordered to move to the Drass sector to evict the Pakistani intruders. 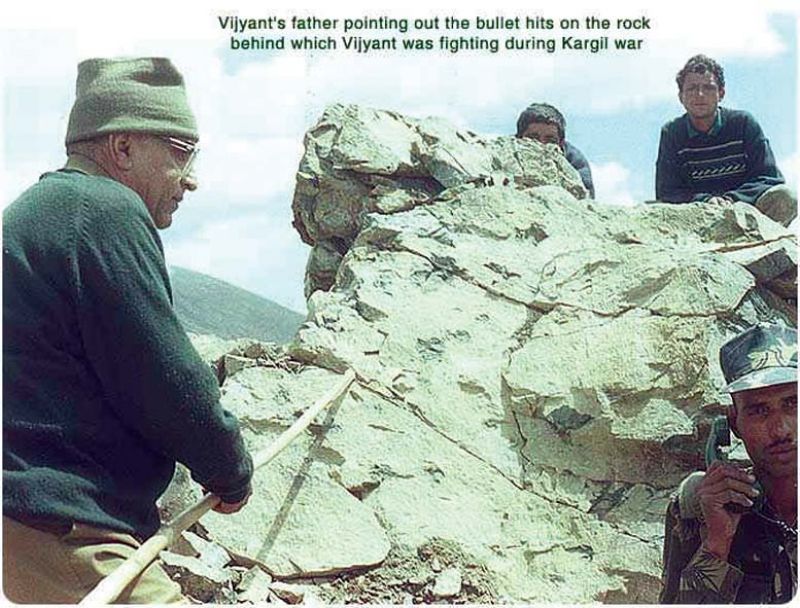 Col.(retd) V.N.Thapar shows the bullet marks on the rocks behind which Vijayant Thapar died during the Kargil war

A couple of weeks before what would be his final encounter, on June 12, 1999, Captain Vijayant moved to capture Tololing under the directions of his Commanding Officer, Col. M.B. Ravindranath and his company commander, Major Padmapani Acharya. During the battle, Robin captured a Pakistani position, Barbad Bunker Point 4,590 and killed two Pakistani soldiers in close combat. On June 13, the tricolour was unfurled atop Tololing, which marked a turning point in the Kargil war.

On June 28, 2 Rajputana Rifles was tasked with capturing more positions - the Three Pimples, Knoll and the Lone Hill area. Upon arriving at Knoll, they found, to their dismay, that Pakistan troops of the Northeren Light Infantry had the advantage. In the exchange of fire with the enemy, Maj. Acharya was killed. Seeing this, Robin and his junior, Naik Tilak Singh, engaged the enemy at a distance of merely 15 meters.

It was at this point that he was shot in the head. A few hours later, the Knoll was captured. It was June 29. The braveheart had reached the end, too. He was awarded the Vir Chakra posthumously and lives on in the memories of his family, who continue to honour the sacrifice their young son made for his country. Every year, on the day, that he left them forever.

Poll results not as per our expectations: Gujarat Congress chief

Respect mandate, going to hand over my resignation to governor: Himachal CM