Sunday story: Hare Krishna! This Lord’s abode will break handis in the heavens!

DECCAN CHRONICLE. | JOYEETA CHAKRAVORTY
Published Aug 28, 2016, 3:50 am IST
Updated Aug 28, 2016, 7:06 am IST
Here in Bengaluru, the eponymous ISKCON tells DC of their plans to raise Krishna to new heights in the Vrindavan of Krishna's boyhood.

These are the first signs of what will be, when its completed by 2022, the world's tallest temple to Krishna.

Lord Krishna may have been subsumed by the rising waters of the 'pralayam' as the oceans rose and Dwarka disappeared some 5,000 years ago. But thousands and thousands of centuries later, as the nation celebrates yet another Krishna Janmashtami, this is the God that his billion strong devotees revel in, his playfulness, his might, his canny ability to outsmart his enemies. Here in Bengaluru, the eponymous ISKCON tells DC of their plans to raise Krishna to new heights in the Vrindavan of Krishna's boyhood.

Barely a stone's throw from the Yamuna, in Vrindavan where Lord Krishna grew from boy to man-God, so many aeons ago, more than 500 pillars, each one, a metre in diameter are being hammered some 55m deep into earth. By March, some 140 pillars now rise from the earth. More will follow. These are the first signs of what will be, when its completed by 2022,  the world's tallest temple to Krishna.

“Currently the foundation work is going on. Then the work of superstructure above ground level will start," says Sri Madhu Pandit Dasa, Chairman of the Vrindavan Chandrodaya Mandir, a project conceived by the devotees of ISKCON Bengaluru. Estimated cost? A whopping Rs 350 crore.

"This temple was envisioned by Srila Prabhupad, founder Acharya of ISKCON in the seventies, which is now under leadership of Sri Madhu Pandit Dasa, chairman Vrindavan Chandrodaya Mandir and president, ISKCON Bangalore. 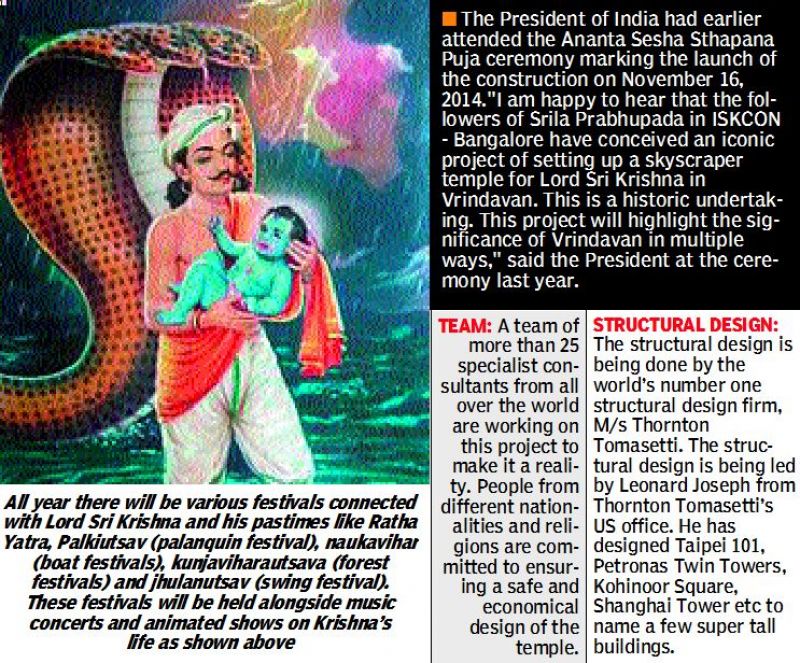 "The vision is to create a grand structure drawing worldwide attention that will enable the movement to instill the divine teachings of Lord Krishna in global society. Various attractions and rides on the lines of Disneyworld and Universal Studios have been planned to give a vivid experience of Lord Krishna's lilas as narrated in the Srimad Bhagavatam, one of the ancient Vedic texts," he adds.

ISCKON Bengaluru members tell us that the temple "will rise into the heavens," in the form of an iconic skyscraper temple that harmoniously blends ancient Indian architecture with a more contemporary, modern style.

"Even though there are some 5,000 temples in Vrindavan, the town fails to get the attention that a spiritual centre of a country should get," says Sri Madhu Pandit Dasa who adds that with the Vrindavan Chandrodaya Mandir, which will 213 meters high (700 feet or 70 storeys) and have a footprint of about 5.5 acres, he aims to change all that.

"The temple will be the highest temple in the word at a height of 210 metres, and it will sit amidst five-and-half acres of land," says Sri Madhu Pandit Das. The temple has a unique architectural feature that harmoniously blends the elements of Indian traditional temple architecture of Nagara style and elements of modern architecture.

"We are hoping to finish the foundation work by next Holi and then the the super structure construction will begin," says Suvyakta Narasimha Dasa. The focus is not just on the magnificent grandiose structure, but on turning the land around the temple into an expanse of green. 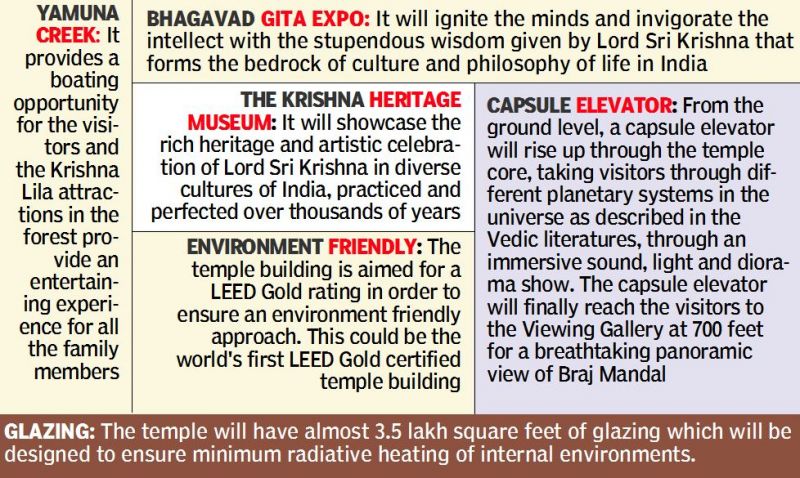 "All the twelve forests will be revived and recreated around the temple and restored to their original glory. We would be doing this to heighten the experience of the devotees and visitors to the fullest, as they can then experience these places as the old hunting grounds of Lord Sri Krishna in these forests," says Suvyakta Narasimha Dasa who explains that original source books of Krishna culture like the Srimad Bhagavatam and other ancient texts describe twelve verdant forests, 'dvadashakanana', that existed during the time of Lord Sri Krishna.

The magnificent temple would also be thrown open to worshippers, and have a daily programs of kirtans, bhajans and pravachans, or discourses. Despite being four kilometers away from the Yamuna river, the temple officials want people to experience a walk by the river.

"We have created a replica of the river on the site so that the feeling of being just beside the holy river where Krishna grew up, is not missed," he said. Where Krishna lived and breathed, and lived among the mortals!

Oh my Kambala! This guy's faster than Srinivas Gowda!

After AP and Telangana, Karnataka state transport staff to go on hunger strike