The Poll: Getting youngsters on board for a game of elections

The idea of melding the two occurred to him while covering the Assembly polls in Uttar Pradesh in 2017, but it materialised only during the Karnataka state polls last year.

A journalist, Abeer Kapoor, is obsessed with a rather unlikely combination of politics and board games. The idea of melding the two occurred to him while covering the Assembly polls in Uttar Pradesh in 2017, but it materialised only during the Karnataka state polls last year. The dream and aim of his pursuit was to engage youngsters, who somehow choose to remain oblivious to political goings on, and get them interested in the present day politics, which he thinks is essential to safeguard democracy.

The result was the board game – The Poll: The Great Indian Election Game. “The Friedrich Naumann Stiftung Foundation for Freedom supported the production of the game in September 2018 and we launched on January 23. So roughly while I was thinking about it for a year, the actual development happened over five months,” the 27-year-old says. 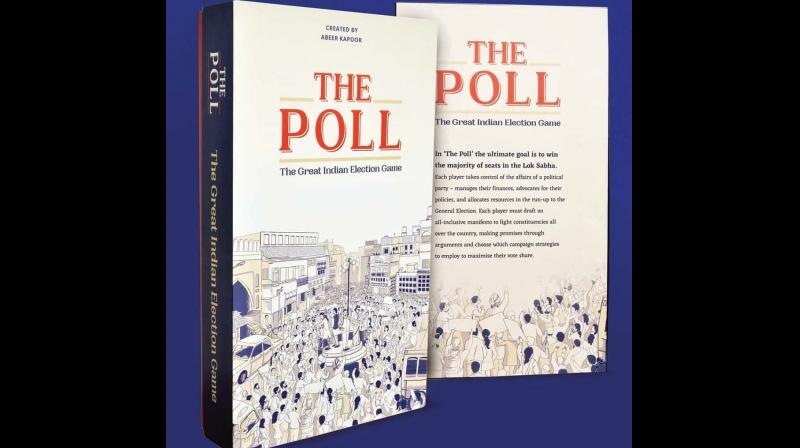 The game is engaging, entertaining and informative, as a large part of it mirrors the Great Indian Tamasha – the elections. “We gamified a process what an ideal election should follow, where there is a relationship between people’s issues and policies mentioned in a party's manifesto. In real life, people have access to manifestoes of parties and hold leaders accountable. In the game, however, the players make up their own rules and play just like in a real election,” he explains.

Each player takes control of the affairs of a political party, manages its finances, policies and decides which seats to contest from in the run-up to the general elections. “Players draft an all-inclusive manifesto to fight the election from all over the country, make promises and choose which campaign strategies to adopt to maximise their vote share, with the ultimate aim to win a majority of seats in the Lok Sabha. The strategy is to win states that send maximum number of MPs to Parliament, and the game takes place over five rounds,” he says.

“This, I think, is a new way to engage youngsters in conversations around elections. It makes them feel that they have an equal space in the election process and are an integral part of it. While seminars and talks are a one-sided conversation, the game offers them an opportunity to talk to each other, question the other players and hold them accountable. It is a way of tricking people into becoming better citizens,” Kapoor says with hope.

“One thing that we could not get into the game was the quality of candidates. But that is something we didn’t want to engage with, because in many cases crime, corruption and communalism are all part of the system,” he says.

Women drivers on the rise in Visakhapatnam

Cops step up vigil on suspects ahead of Independence Day