Suresh Subrahmanyan
The author is a brand consultant with an interest in music, cricket, humour and satire

Bearding the lion in his own den

Once I got past the Eureka moment, it was the work of an instant to reflect on the respective merits of each player’s beard and its contribution to his personality, if not to the team’s performance.

‘He that hath a beard is more than a youth, and he that hath no beard is less than a man’. William Shakespeare, Much Ado About Nothing.

Here’s a deceptively simple cricket quiz. What does the entire Indian Test cricket squad (all 18 of them) presently touring England, have in common? The hint is in the headline and Shakespeare, but I’ll put you out of your misery. The smarty-pants who said ‘They all sport beards’, go straight to the top of the class. You win a year’s free subscription to The Bearded Gazette. I worked this out for myself by keen observation. No, I tell a lie. It was sheer accident. Watching on television, it occurred to me that many of the English players are clean-shaven and fresh faced, the profusely bearded Adil Rashid and Moeen Ali being the exceptions. They are English, by the way  more or less. The straggly, apologetic offerings of Stokes and Root can be discounted.

Comparatively, Indian players looked scruffy. The reason for this apparent slackening of grooming standards had me wondering, but I could not put my finger on it. Till it hit me, right between the eyes. Voila! It was the bushy facial fungus, as Bertie Wooster might have put it.

Once I got past the Eureka moment, it was the work of an instant to reflect on the respective merits of each player’s beard and its contribution to his personality, if not to the team’s performance.

Dear readers, I can sense alarm spreading across your faces, bearded or otherwise. Fear not, my analysis will be pithy and confined to just the more prominent beards. I am also of the firm conviction though I do not possess incontrovertible evidence, that in the annals of international cricket, this is the first time an entire team of touring cricketers is both bright-eyed and bushy visaged, if not tailed. 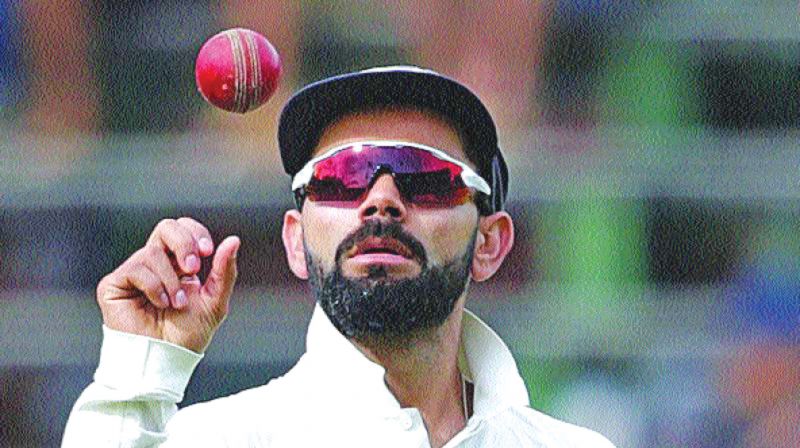 Virat KohliA unique record that would have sat well in Ripley’s Believe It or Not! I should pause here and retrace my steps. The spur for this strange piece on beards was provided by former Lancashire and England international, now a much loved cricket commentator on our television screens, David ‘Bumble’ Lloyd, a spiritual successor to the idiosyncratic Geoff Boycott, only more charming and less acerbic than the ailing Yorkshireman. During the recently concluded Test Match at Trent Bridge, Bumble the loquacious Lancastrian with a delicious brogue, was commenting on how his Test Match duties were tragically preventing him from being at the Beard and Moustache Championships in Blackpool! In consonance with the, ironically, beardless Bumble’s nattering on about this bizarre event at a Test match, the cameramen were zooming in on various hirsute members of the crowd who were proud owners of all manner of beards. Goatee, Van Dyke, Mutton Chops, French Fork, the ubiquitous Sikhs, a couple of Rabbis  they were all on view. All made more entertaining by Bumble’s risible observations. Some decades ago, his predecessor, Henry Blofeld on radio used to do pretty much the same thing with earrings. ‘Oh golly, isn’t that smashing’, Blowers would exclaim when the camera panned on a pair of stunning hoop danglers, adorning a comely lady. In the commentary box the team was assisted by their statistician and scorer, Bill Frindall, who was fondly addressed by his fellow commentators as ‘The Bearded Wonder’ or ‘Bearders’.

Back to the now resurgent Indians, it is quite clear that Virat Kohli, an obsessive perfectionist, sports a beautifully groomed beard. He clearly takes great pains to ensure that it is regularly trimmed, and given how much time he spends at the crease, that is all to the good. A beguiling, if animated face on camera, Kohli’s beard becomes him. His predecessor Dhoni was exactly the opposite. You never knew with MSD, which face is going to turn up of a morning  unshaven, white bristled, completely clean shaven, no moustache / yes moustache, but always cool. As to the rest of the present squad, Lokesh Rahul, Dinesh Karthik and Cheteshwar Pujara are adequately bearded, but they should spend more time at the crease for us to appreciate their beards’ luxuriance. Murali Vijay’s hair and beard are, frankly, a disaster. I wouldn’t be surprised if he was dropped after the third Test for that reason alone! The rest of the squad, beard-wise, are caught between a rock and a hard place to shave or not to shave. A Hamletian dilemma.

As we conclude this strange contemplation on beards, let us reflect on great cricketing beards   over the ages from across the world. Pakistan, as you would expect, prided themselves on Saeed Anwar, Inzamam, and Mohammad Yousuf, the nation’s bearded trophies. Pakistani umpire Aleem Dar’s beehive is the envy of the umpiring fraternity. South African Hashim Amla’s majestic outcrop matches his silken batsmanship. They were all clean shaven initially, so one must conclude they were driven by a higher calling to go with the theocratic look.

Finally, let us bow reverently to the granddaddy of them all, W.G. Grace. Without his beard, Grace would not have been half the cricketer he was. His amazing legend grew with his flowing beard. Two stories bear out Grace’s God-like status in the cricketing firmament. On one occasion, the bowler had the great man beaten for pace, dislodging the off bail. Grace calmly placed the bail back and remarked, ‘Bit windy this morning, what’ and carried on batting! During another game, he was trapped plumb in front for no score, LBW. Scowling at the umpire’s raised finger, Grace stroked his beard and bellowed across the pitch, ‘the crowds have come to see me bat, Ump. Call no ball, and let’s get on with it’. The stories may be apocryphal, but they’re ripping yarns! That was W.G. Grace, the father of modern cricket - The Original Bearded Wonder. Amazing Grace.

(The author is a brand consultant with an interest in music, cricket, humour and satire)

No field work for elderly and pregnant women police