In political science, the origin of the modern state is a well-studied topic. In our ancient literature, there is discussion of Matsya Neeti, that is, larger fish start swallowing the smaller ones, or the more powerful dominating and oppressing the weak. It is because this the necessity of a state apparatus to protect the weak arose. Subsequently, the size of the government increased with higher levels of development.  The state had many more functions than taking care of internal order and external security. Later revolutionaries saw state as an instrument of oppression in the hands of the dominant classes. The state has played all these roles and has transcended the frontiers of any one theoretical perception. We have traversed more than quarter of a century in which the view that the government should withdraw from many sectors that can be left to private initiative and become a mere facilitator has become hegemonic.

Be these as they may, let us look into the deeper question of how the government matters in differing degrees to sections of Kerala society at this stage. In our society, we celebrate budgets and anniversaries of governments. But, this long run dynamics has not yet been adequately addressed. Kerala has been a unique development experience at the sub-national level. Through government intervention and public action, quantitative expansion of education and health facilities brought us laurels in the form of high Human Development Index. As a power surplus state of yester years, we had developed industries which consumed the power produced at home. Obsolescence over a period of time created rust rings in the old industrial areas and mascots of our pride became sick mammoths.  The few public institutions of excellence like Centre for Development Studies and Sree Chitra Thirunal Institute of Medical Sciences and Technology stand as islands of excellence amidst the ocean of mediocrity.

Eminent social scientist Mancur Olson's view of institutional sclerosis holds good in our society in many realms. In the meanwhile, the Gulf boom and remittances transformed our society into a high per capita income one from a low income one. But the spread has not been even. It will be surprising to many that our egalitarian path of development has resulted in a very high level of income inequality, much higher than the national average. This has serious implications for the role and relevance of the state and government. Basic and higher education over the years put our then demographic dividend at a premium within our country and outside. The State started getting economic returns in the form of remittances and higher incomes. This in turn had the consequence of the citizenry getting ready to pay for basic needs like education and health. Private interests searching profits found a great avenue in this and built up institutions, many in the garb of charitable activity and some as overt commercial ventures. 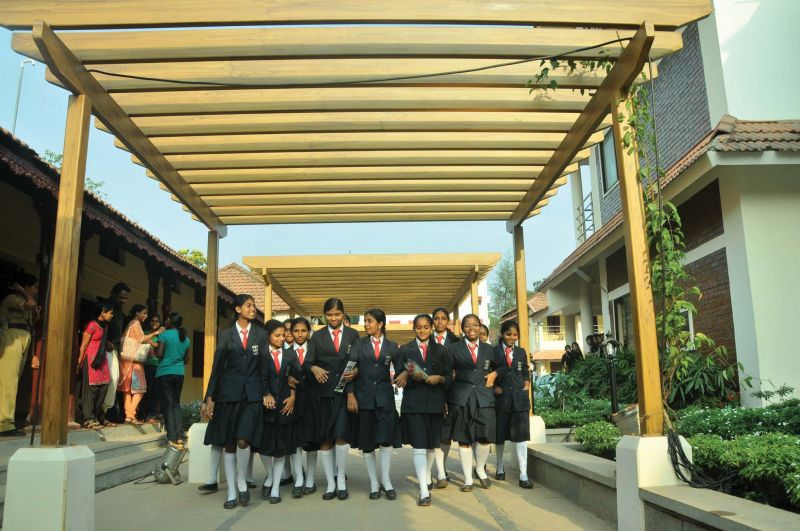 The positive aspect is that this government has recognized the need to improve public sector services in education and health. The crying infrastructure deficit has also been recognized. One particular area that witnessed the change was the educational sector. A scene from Nadakkavu school.

This left the government and aided institutions in the lurch and they suffered from lack of quality conscious takers. With apathy from powers that be, secular decline or institutional sclerosis set in. Only the citizens at the economic margins were wholly and exclusively dependent on these and they have little strength to bargain for any quality or standards. The neo liberal reforms accelerated this process and the relevance of the state and its intervention was questioned at the global level. It is at this time that Kerala embarked upon the mission of decentralised planning and it drew world-wide attention in the immediate period after the big statist models stood discredited and dismantled. It started off well and did make strides. Eventually, analysts started noting that attendance in Gram Sabhas started declining. This lack of interest directly stems from the mental secession from the feeling that "I too need the state and its services".

The organised middle classes could well afford to do without state and its services. It should be noted here that the working-class movement acquired enough bargaining power to force minimum and sometimes much more higher wages for sections in the unorganised sector. Some of these sections, like the headload workers had serious conflict of interest with even the lower middle class in society. The aim here is to point out that services provided by the non-state service providers came within the reach of many save the extremely poor.  It is another fact that the hawkish service providers astronomically hiked rates made affordability a problem.

Our society has crossed the turning point of state dependence by the relatively better off and vocal sections. The middle classes are in a mental state of thinking that the state and its services are irrelevant to them, except certain monopoly ones. But this stage is quite fragile. Our economic prosperity is remittance and commodity price driven. Any downward slide can have terrible consequences. One year or one budget is not the occasion to evaluate a government. But the positive aspect is that this government has recognised the need to improve public sector services in education and health.  The crying infrastructure deficit has also been recognised.

In the remaining four years, quality upgradation of social services in public sector, welfare measures for those at the social margins and bridging the infrastructure deficit have to progress in tandem along with fiscal consolidation. This is an arduous task which the government has taken upon itself, in the first year. In the meanwhile, entertainment with controversy gas filled balloons will fly in the evening screens. But whether the further slide of the feeling of the irrelevance of the state in the minds of the better off sections will depend on the successful management of the four-pronged strategy, outlined in the first year, in the next four years.  This could be the meaningful turnaround beyond the turning point. One has to be hope for and wish the best.