A temple where Saivism and Vaishnavism go hand in hand

Shiva lingam in the temple.

Hyderabad: Despite the Kakatiya rulers giving importance to Saivism, they were not averse to the spread of Vaishnavism also. The architectural beauty of the Trikuta temple of Kasi Vishweshwara Swamy, Anantha Padmanabha Swamy (Anantasayana) and Venugopala Swamy, reflect a mix of Saivism and Vaishnavism, at Kalbagoor village in Sangareddy district of Telangana.

The little known 11th to 13th century Kasi Vishweshwara Swamy temple is located 60 kms from Hyderabad and 4 kms from Sangareddy on the banks of River Manjeera, a tributary of River Godavari.

Like other Kakatiya temples, this temple too is an architectural masterpiece and has beautiful architecture like the one in 1000 pillar temple in Warangal. The Kakatiyas ruled over the Telugu country from Orugallu (Warangal) from about 1150 AD to 1323 AD.

According to Dr P.V. Parabrahma Sastry, a scholar in Telugu and Sanskrit and an epigraphist, who did extensive studies on Kakatiyas and other rulers, the Kakatiyas inherited the main architectural style of the Chalukya period. However, the distinct feature of Kakatiya architecture is the display of more indigenous art than adherence to the tenets laid down in the texts on vastu and silpa. 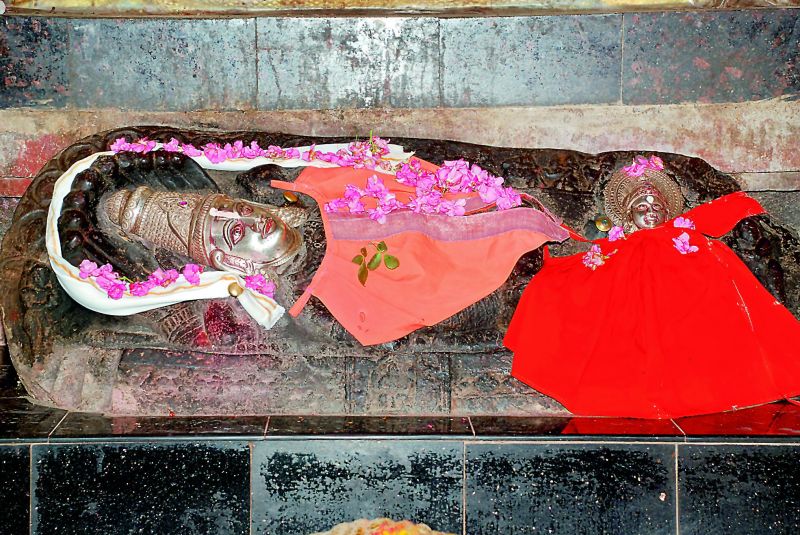 In Trikuta temples they closely followed the architecture of the Chalukyas. They used locally available granite and sandstone for main structures up to the “vimana”, its super structure is built of brick and lime. Black granite is used for pillars, jambs, lintels, decorative motifs and icons.

Though not much record is available on the history or the importance of the Sri Kasi Vishweshwara Swamy temple, it is believed that childless couples, sick people and others used to offer prayers at the temple, put their offerings at the “Ragi” tree (Peepal tree, Ficus religiosa or sacred fig tree) which is no more. However, devotees still throng the temple, especially on Shivaratri day and other auspicious occasions.

“Childless couples and the sick made it a point to offer prayers at this temple and their wishes were fulfilled.  Even the temple priest who fell sick and his survival was ruled out by doctors did not lose heart and decided to stay at the temple. He recovered,” says Venkatesham, a local who is active in the affairs of the temple.

“Interestingly, the first sunrays fall at the feet of Anantha Padmanabha Swamy. The temple architecture is similar to the 1000 pillar temple. Thousands visit the temple on Shivaratri and other festivals,” he added.

Department of Heritage, Telangana State took up the renovation of the temple and restored its past glory on the initiative of Director Visalatchy. Then undivided Medak Collector Ronald Ross planned a tourism and cultural centre but it is yet to be taken up.

“It’s a Trikuta temple and consists of a porch in the east, a hall and shrines to the west, north and south of the hall. Each shine has an antarala and a grabhariha. Venugopalaswamy, Vishnu as Anantasayana and Lingam are the icons housed in the three shrines. The walls of the shrine are constructed of large blocks of stone. The shrines have stepped pyramidal type of sikharas. These temples belong to the Kakatiya period,” B. Narayana, Deputy Director (Engg) of the department told this newspaper.

Talking about the restoration work, Narayana said the temple was covered in earth up to 7 to 9 feet over the years and this was completely removed bringing back the past glory of the temple. Other renovation work was going on. The temple has a beautiful step well which needs to be restored. Dr Kavuri Srinivas, who wrote a book on the temple history, says the Trikuta temple belongs to the Kakatiya period dating back to 10th to 13th century.

“Decoding of two shahasanas indicates that the temple was constructed during the period of Kakatiya king 2nd Pratapa Rudrudu by his minister Jayapasena. The Shiva Lingam is much older. There are several such beautiful temples at Nandi Kandi nearby and other places in this region. Originally the temple was housed in about 50 acres but over a period of time the area shrunk due to encroachments,” he explained.

The temple has a well carved step well which badly needs restoration. “We will take up its renovation once we get sufficient funds. We have renovated the temple and removed all the mud and debris that had sunk the temple over the years. If people cooperate, the temple and its entire complex will get back its past glory,” Narayana said.

One lane on highways should be kept free for ambulances, VIPs, says Karnataka Min

TTD gets a jumbo Board; 52 'special invitees' included

'Pattayam' to be distributed to 13,500 families under govt initiative: Kerala CM