VIJAYAWADA: Juuling or vaping is becoming popular among adolescents in Andhra Pradesh, and the use of electronic cigarettes by them is increasing dangerously.

Juuls are a type of vapourisers designed so discreetly that most people don’t even recognise them as e-cigarettes. They contain nicotine and their usage is relatively high in the state compared to the rest of the South.

Evidence about the ill effects of their use in adolescents has been building up.

Recent inputs gathered by the state government from six districts point to the rapid increase in the use of e-cigarettes among the youth and newbies. The government is planning to address the issue on a priority basis.

Juul vapourisers are small enough to fit in the palm of hands and can be charged when plugged into a laptop’s USB slot, making it easy for students to pass them off as flash drives in class. The Juul pods come in flavours such as creme brulee, cool cucumber, and mango.

“They are available online and leading companies are encouraging their sales. We need to enact a special law to curtail or restrict the sales of the juuls,” a senior police officer said.

Electronic cigarettes (e-cigarettes) first became available in the middle of the last decade. Their use, which is called as vaping, has risen rapidly among adult tobacco smokers as well as newbies.

Doctors have been warning that nicotine exposure during adolescence can cause addiction and harm the development of adolescent brain. The promotion of Juul is largely by youth themselves through images and videos on social media platforms.

The big problem for the DCA is as to how to stem the import of juuls. “It needs the intervention of the ministry of commerce and trade also, as the AP DCA can’t act on its own if it wants to serve notices to online companies,” the officer said. 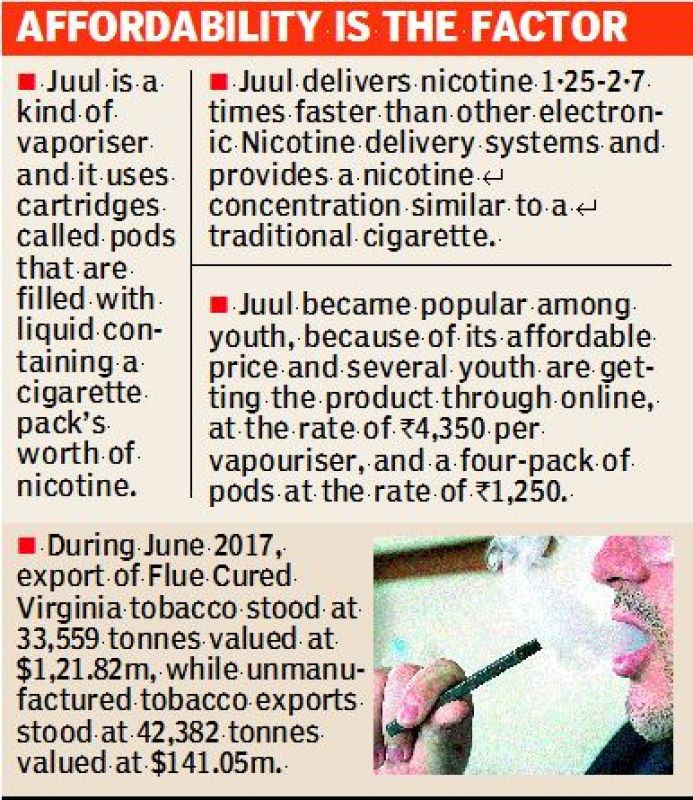 Substance abuse in AP kills 150 every year; toll may rise

Drug abuse and alcohol addiction are driving 130 to 150 persons to suicide every year in Andhra Pradesh.

Experts warn that the number was bound to go up in the coming years as more youth are taking to drugs.

Speaking on condition of anonymity, a senior police officer said that in cities like Vizag and Vijayawada, there is a rise in crimes among those who use drugs. He noted that women are also beginning to experiment with drugs.

The NCRB says that Andhra Pradesh came fifth in the country in 2015 in drug-related suicides. Upset over not getting drugs such as opium and others, some youngsters committed suicides in the state.