DECCAN CHRONICLE. | SHYAM SUNDAR VATTAM
Published Sep 24, 2017, 6:57 am IST
Updated Sep 24, 2017, 7:13 am IST
Selecting the Howdah elephant was a painstaking process, especially during the days of the Maharajas.

There are cultural troupes accompanying them but the cynosure of all eyes is the Howdah elephant that carries the 700 kg Golden Howdah in which the idol of Goddess Chamundeshwari is placed.

The age of royalty has passed, the booming guns of the royal armies and the clash of cymbals are only distant memories in the minds of those born before freedom. But come Dasara, the charm of the royals, the grandeur of their celebration and an unrivalled display of art, cultural and traditional forms, make the streets of Mysuru come alive. The biggest attraction of course, are the magnificent caparisoned elephants, about a dozen of them, as they move swaying in the Jumboo Savari procession, making visitors wonder if a spectacle like this could be seen anywhere else in the world.

With Dasara approaching, Shyam Sundar Vattam traces the jumbo effort which goes into the selection and grooming of elephants for the Vijayadashami procession and how the tradition has evolved over countless years

Jumbos and Mysuru Dasara could anyone imagine the festival without these gentle giants? Tourists from across the country and abroad, who  descend on the Heritage City to witness the nine day Dasara festival, are inevitably awestruck by the sight of the decorated elephants walking majestically from the Mysuru Palace premises upto Bannimantap grounds a distance of 5.5 km carrying the idol of Goddess Chamundeshwari the presiding deity of the erstwhile Mysuru rulers.

There are cultural troupes accompanying them but the cynosure of all eyes is the Howdah elephant that carries the 700 kg Golden Howdah in which the idol of Goddess Chamundeshwari is placed. All the Dasara elephants undergo rigorous training for at least 15 days to get acclimatised to city traffic and the deafening cheers of thousands of people lining the streets.

The elephants selected for the Dasara procession are VVIPs no doubt, from the day they enter the palace till the Jumbo Savari ends. A special diet is prescribed for all of them; especially the Howdah elephant to ensure it remains fit and fine till Vijayadashami day.

Selecting the Howdah elephant was a painstaking process, especially during the days of the Maharajas. The task is now entrusted to the department of forests which chooses the best among the captured elephants, studying its height, weight, temperament and looks. But in those days, the Maharajas personally selected the Ambari or Howdah elephant and even took pains to depute officers to other countries to look for a suitable elephant to match the grandeur of the occasion. A team of officers examined every detail before zeroing in on the Ambari elephant.

The correspondence of the royals is enough to prove the lengths to which they went to find the perfect choice for the Jumboo Savari. In a letter dated June 30, 1925, the conservator of forests recommended to the Maharaja that "Mr L.P. Mascarenhas, district forest officer of Shimoga, be deputed to go to Assam and Burma for a month, in connection with the purchase of an Ambari elephant. For that, he may be allowed to take a peon with him and given an advance of Rs 400 towards his travel expenses."

The Maharaja, in his reply dated July 31, 1925, stated, "The proposals of the conservator of forests is approved. Mr Mascarenhas will visit Silchar and Guwahati first, and will regulate his further movements on the basis of the information he may be able to get at these places, as to the place where a suitable animal can be found. The comptroller is requested to advance a sum of Rs 400 to Mr Mascarenhas to meet his travel expenses in this connection, the amount being accounted for by Mr Mascarenhas."

Stories abound about the search and selection of the Ambari jumbo over the decades. For instance, elephant Pattabhiraama was bought in 1935 for Rs 3,000 from the Tirupati temple during the reign of Maharaja Nalvadi Krishnaraja Wadiyar. It weighed seven tons and stood nine feet seven inches.

Maharaja Nalvadi Krishnaraja Wadiyar was so particular about the selection of the right Ambari elephant that he even rejected the proposal of a timber merchant in Assam who offered to sell 10 elephants for around Rs 30,000, on the ground that none of them had the qualities to carry the Howdah. This forced the officer sent on special duty to hunt for the Ambari elephant in Burma. After carefully scrutinising all details furnished by the officer, the Maharaja gave the green signal to go ahead with the purchase of jumbos. Apart from telegrams, the Maharaja sought photographs from the officer to see the features of the elephants selected!

Such was the respect and adoration for the jumbos that many of them have grown into legends. One of them was Sundar Raj, used as Ambari elephant in the Dhaara procession of Sri Jayachamarajendra Wadiyar, another was Vijaya Bahadur, used during the marriage procession of Maharaja Nalvadi Krishnaraja Wadiyar in 1902.  Forest officers took care to see that a second line of elephants was groomed to replace the Ambari elephant when they either aged, died prematurely or became incapacitated.

The Wadiyars built a gajashala to take care of elephants and appointed people to look after jumbos not only during the Dasara festival but also during other times. Sadly, the gajashala has now become history, there are no records available in the Department of Archives to provide information about the Ambari elephants prior to 1900 either.

Soon after the democratic order became the norm in the country, royalty had to make its exit and in 1972, the centuries old tradition of the Maharaja going in the Dasara procession, seated in the Golden Howdah, came to an end.

Now, the Ambari elephant carries the Golden Howdah with the idol of Chamundeshwari on his back.

There was a break in the celebrations for some time but in 1975, a Citizens Committee headed by industrialist F.K. Irani took up the responsibility of continuing the Dasara procession. In 1980, then chief minister R Gundu Rao revived the festival in a grand manner, describing it as the 'People's Dasara.' Countless generations will be thankful to him for making sure the Dasara celebration, did not disappear like many other famed traditions, into the pages of history.

As we come to terms with the rigours of the modern age, will our minds turn blind to the glorious beauty of the Vijayadashami procession which has made forgotten generations across countless centuries swell with pride? Machines may rule our minds but our hearts still long for the simple wonders of life-for the sight of a magnificent Arjuna striding through the city of royals to thunderous applause, for the mesmerising music and the sight of the swirling dancers creating magic with their rhythmic poses. The Dasara celebration and the Ambari elephant, we can be sure, will survive and continue to enthral millions through time. 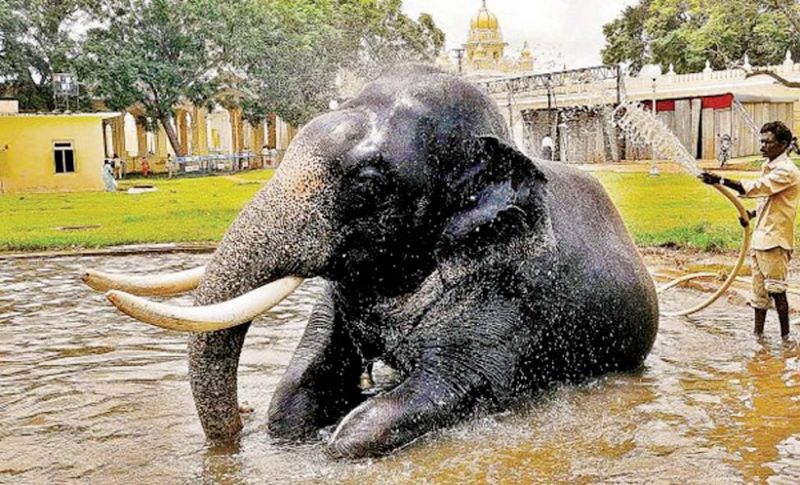 Legends in their own right
Such was the respect and adoration for the jumbos that many of them have grown into legends. One of them was Sundar Raj, used as Ambari elephant in the Dhaara procession of Sri Jayachamarajendra Wadiyar, another was Vijaya Bahadur, used during the marriage procession of Maharaja Nalvadi Krishnaraja Wadiyar in 1902.  Forest officers took care to see that a second line of elephants was groomed to replace the Ambari elephant when they either aged, died prematurely or became incapacitated

TN man sacrifices his daughter, hoping to get rich

Karnataka worries about the Mumbai link to rising Covid19 cases

Two UP guest workers who returned to their villages commit suicide