Dasaiahs, on the brink of extinction: The last generation standing

The Dasappa or Dasaiahs, the most sacred of tribes in Karnataka, were once revered and invited to weddings and religious occasions, with many seeing their chanting of "Govinda, Govinda" and blowing of the conch as a means of ushering in good health and happiness.

Wearing a red turban and a Kachche Panche, and with a "Nama" painted on their forehead, hands and neck, they wandered the streets of the city, blowing on a conch or Shanka as it is called , striking a gong (a round percussion instrument called Jagate), and holding out the Bavanasi, a metal vessel to receive alms.

The Dasappa or Dasaiahs, the most sacred of tribes in Karnataka, were once revered and invited to weddings and religious occasions, with many seeing their chanting of "Govinda, Govinda" and  blowing of the conch as a means of ushering in good health and happiness.

But now these colourfully attired men, who would arrive at your doorstep on Wednesday and Saturday mornings, are hard to spot in the city. Those of the Dasappas, who still remain, say the younger generation is reluctant to continue their ancestral way of life.

In the past the Dasasiahs were invited to almost every religious and auspicious occasion, and the people attending these events would partake of the food served only after the Dasaiahs chanted, Kuchela Varadha Govinda, Sriman Narayana Govinda, Akhilanda Koti Brahamanda Nayaka Govinda, Govinda, to invoke the Gods and bless those assembled.

Revered and sought after, the tribe thrived. But with the city’s population growing and modernity creeping into almost every aspect of life, the Dasaiahs are now being relegated to the sidelines and could end up becoming relics of the past as they are an almost forgotten breed with only a few seen on the streets, begging for alms and blowing on the conch as is their custom.

Sixty five-year-old, Venkataramana, is one of the few Dasaiahs to still wander the city. Come rain or shine he covers about 20 kms a day on foot, walking from Yediyur in South Bengaluru to K R Market every Wednesday and Saturday to keep his way of life alive.

From the village of Tungani in Kanakapura taluk, about 55 kms from Bengaluru, Venkataramana is proud to carry on with a tradition passed on from generations in his family. "There have been around 60 Dasaiahs in my family," he boasts. "I received permission to become a Dasaiah from my grandfather, who got the title of Dasajja as he was seniormost in the family. Only if you are given permission can you become a Dasaiah," he explains.

Sadly, most of the 60 Dasaiahs in his family are no more, he reveals.  "Several of them have died and their sons are not interested in this profession. My son too is not keen on following this tradition," he regrets, adding that today there are only around 30 Dasappas roaming the city’s streets. "And soon it will be very hard to spot one of us," he notes regretfully. 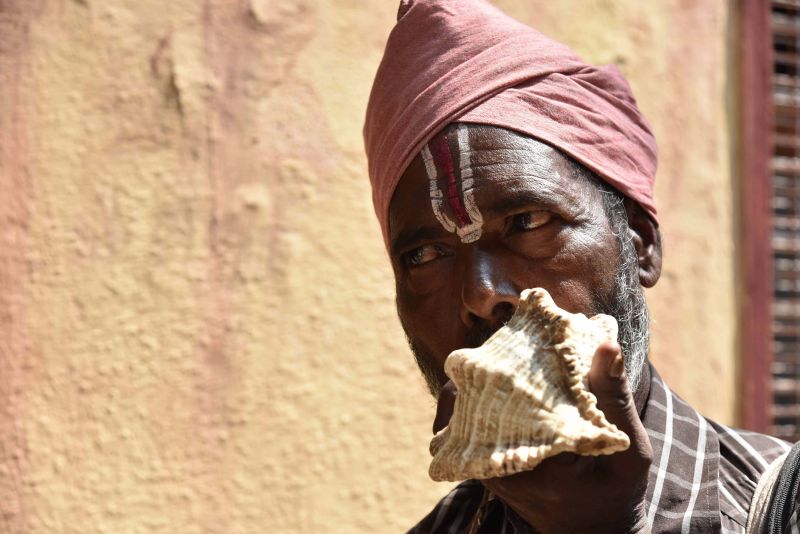 While Venkatramana still makes around Rs 500 to Rs 1000 a day  from the alms he receives on the  streets, sadly he does not command the respect of old as not many in the modern world see the Dasaiahs as particularly special. Aware of the change in people's perspective, he takes care only to visit the old part of the city where the Dasaiahs are still held in high esteem.

"We never go to places where there are  apartments as the security guards chase us away. We only go where people still revere us," he says.

Going door to door, Venkatramana also manages to collect about 5kgs of rice in alms, besides the money that people give him. He, however, takes care not to hoard the rice and make money from selling it to others as this would go against his beliefs. "We don't sell it but store the rice and cook it for our family as it is given to us in the name of God," he adds.

Admitting it is a struggle today to keep these customs and traditions of centuries alive, he believes they will end with his generation. "Neither are the younger members of our families interested in them and nor is the government bothered to motivate them. We have given up asking for support," he adds ruefully.

In fact, Venkatramana's son is keeping so far away from his family's traditional profession that he runs a taxi service with the car he has bought. His daughter, meanwhile, holds a bachelors degree in fine arts and is married to a businessman in Bengaluru.

While the younger generation is  moving on to a different path, the remaining Dasappas like Venkatramana faithfully meet twice annually in the Tirumala hills as required by tradition.

"We trek barefoot twice a year to the Tirumala hills as part of our custom. Hundreds of Dasaiahs come from different parts of the state and share their life stories during this mass gathering," he says. While this annual event may give the illusion of continuity, all of the gathered Dasaiahs are aware that they could be the last of the men in red turbans wandering the streets of cities and chanting “Govinda, Govinda” in return for alms.

Heavy rains in Kodagu cause massive floods and landslides

What is COVID? ask Bonda tribals of Malkangiri

In a rare move, funeral ceremony of Tibetan soldier open to public