Dasara, the day the world comes to Mysuru to live its dream

The state government, for which the Dasara event is a matter of prestige, is spending Rs 20 lakh to indulge them with nutritious food, according to deputy conservator of forests and Dasara elephants in-charge, Mr Siddaramappa.

Is there any other celebration in this country which showcases the grandeur of kings of a bygone age, their martial traditions, unrivalled valour and most of all the magnificent, caparisoned jumbos better than the 10 -day Mysuru Dasara, which will reach the grand finale with the Jumbo Savari procession on October 19? As the Heritage City, Mysuru, gears up for another grand celebration, now barely a month away, SHILPA P. delves into the history of the Mysuru Dasara, made immortal by the Vijayanagar kings and later the Wadiyars – to remind us that this is a nation which thrives on a million traditions, which every king felt should be nurtured so that future generations can hold their heads high and proclaim that they have a legacy of rich thought and values to cherish and live up to.

The courtyards of Mysuru Palace are the first to wake up to the Dasara fervour-jumbo, Arjuna and 11 other elephants have already arrived here from their forest camps and are housed here along with their caretakers to keep them in fine mettle for the 408th Dasara Jumbo Savari procession. Every morning and evening, the gentle giants march gracefully through the heart of the city as part of the acclimatisation exercise with proud Mysureans lining up on either side of the street to have a glimpse of them and to pose for selfies.  Arjuna no doubt is the cynosure of all eyes-on Vijayadashami day, he will carry the 750 kg, historic golden howdah with the idol of Goddess Chamundeswari in it, accompanied by the 11 other Dasara elephants. This is the major attraction of Jumbo Savari procession and will see Arjuna adorned with singoti on his tusks, chaamara on his ears, hanepatti on his forehead, dibba on his legs and intricate designs over his body, leading the tableaux and cultural troupes in a procession which could be over a km long.

Watching the jumbos cover the 4.8 km procession route from Mysuru Palace to the Bannimantap torchlight parade ground will be a four lakh crowd or even more, of Dasara enthusiasts who converge here from across the state, country and the world over. “Arjuna is healthy and at peace with himself and will complete the pivotal task with ease,” says his mahout, Vinu.  There are 6,072 elephants in different forests of the state as per the 2017 census, according to senior forest official Mr Subhash Malkhede but only 12 are selected from different forest camps and this year they are: Arjuna from Balle camp, Balarama, Abhimanyu, Gopalswamy, Drona and Varalakshmi, from Maththigodu camp, Cauvery, Vijaya, Vikrama, Gopi and Dhananjaya from Dubare camp and Chaithra from M Hole camp of Bandipur tiger reserve. Dhananjaya is the new face this year.

To familiarise the elephants with the procession route during the night, they are being taken on an evening stroll every day at 6 pm. The state government, for which the Dasara event is a matter of prestige, is spending Rs 20 lakh to indulge them with nutritious food, according to deputy conservator of forests and Dasara elephants in-charge, Mr Siddaramappa.  The special meals are no doubt a sumptuous treat-they include boiled black gram, green gram, wheat, boiled rice, onions blended with cooked vegetables topped with butter, prepared by a team of cooks led by veterinary assistant Rangaraju. Back from their stroll every morning and evening, they are fed ‘Kusre,’ a combination of coconut, groundnut cake, jaggery and sugarcane packed in paddy straw. They are also given a massage of castor and neem oil, besides a shower in between.  This year, along with Arjuna, Balarama and Abhimanyu too are being trained to carry the golden howdah so that an alternative is available if something goes wrong. To get Arjuna used to the weight, sand bags weighing 300 kgs are tied to his back and gradually increased. “We are even training second line elephants including Gopi, Dhananjaya, Drona and Gopalswamy to carry the sand bags so that they will be ready to carry the howdah in five to six years,” says Dr D.N. Nagaraj, veterinarian of the Dasara elephants for the past 19 years.

The pachyderms are being familiarised with the booming cannon shots too-21 of them-which will be fired from the 150-year-old brass barrels at the Mysuru Palace premises after the chief minister offers floral tribute to Goddess Chamundeswari in the golden howdah on Vijayadashami day.  The roles of the elephants have been finalised-Arjuna will carry the golden howdah for the eighth time, Cauvery and Varalakshmi will accompany him on either side as Kumki elephants. Balarama will function as Nishane elephant at the forefront of the procession with his mahout, Thimma carrying the flag with the royal insignia-the gandaberunda. Abhimanyu will be the Nauphat elephant and Vikrama will function as the pattada aane for the Navarathri rituals of the erstwhile royal family of Mysuru. The remaining elephants will line up as saalaanes. On  procession day, artist Nagalingappa Chandrappa Badiger will paint the designs on them.

The wait for the big day has begun-when the streets of Mysuru will be lit up in a thousand hues, when dancers will swirl to the tunes of enchanting music, when tableaux will showcase the magical imagery of a state which has all it needs to take it to dizzy heights-and when the jumbos will prove their might and dazzle us with their giant-size performance, swaying gently to acknowledge the thunderous applause from the lakhs around.

The golden howdah will be tied to Arjuna on a cushion of Namda (made of coconut fibre), Gaadi (made of hay straw) and Chaapu (made of coconut fibre) which will be covered with Joola, a silk cloth.  According to Dr D.N. Nagaraj, after Dasara, the elephants will return to their respective camps where they will be used in operations of the forest department to catch tigers or leopards or even truant elephants that move out of forests during man-animal conflicts.   Not only the jumbos, even the 12 mahouts and 12 kawaadis are been accorded royal treatment during their stay at the palace premises. The government has arranged a tent library and tent school for their kids to make sure they do not miss classes A health camp managed by the Ayush and naturopathy wing of health department is making sure they are all fit for the jumbo-size celebrations  set to unfold in a month.

Jumbos at the heart of Dasara

The jumbo, made famous by Lord Ganapathi, is also the vehicle of Lord Indra. History says that in 305BC, elephants were part of the army of Chandragupta Maurya and played a glorious role in the battle with Emperor Alexander. They were also used during the Dasara celebrations of  the Vijaynagar kings in the 16th century.  After the Vijayanagar kings, it was Sri Raja Wadiyar of the Mysuru kingdom who revived the Dasara tradition in 1610. The golden howdah was carried by elephants at that time too but it was the Maharaja who sat inside. After the unification of Karnataka, Sri Chamaraja Wadiyar was the last king who sat on the howdah in 1969-70, carried by 12 feet tall Biligiri Ranga, recalls 79-year-old photo journalist Amardas D. Hinduja who has covered 61 Dasaras. 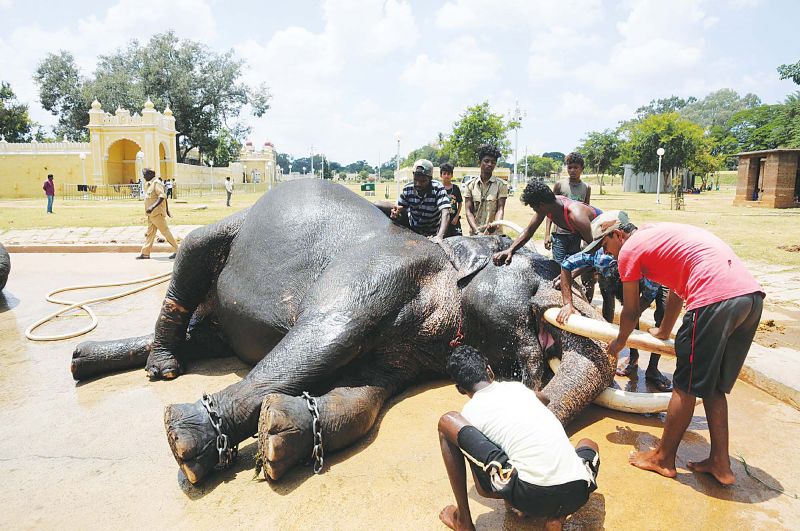 Mahouts giving a bath to a Dasara elephant in Mysuru (Photo: DC)

“Later, industrialists like F.K. Irani and others came together and formed a committee to celebrate Dasara to attract tourists to Mysuru. After the state government started celebrating Dasara as Naada Habba in the late 1970s, Goddess Chamundeswari was kept in the golden howdah,” says Mr M. Lakshminarayan, Huzoor secretary of Mysuru Palace, who has been serving for 47 years since the age of 17 at the Palace.  Biligiri Ranga carried the howdah in 1987, Rajendra, in 1988, Drona from 1989 for 18 years, Balarama  for 13 years and Arjuna  seven times till now.

No action taken against unrecognised schools in Andhra Pradesh

MEA: India, China agreed on peaceful way out of border deadlock in Ladakh

Has the monsoon arrived in Kerala? Private forecaster Skymet says yes, IMD no

Two UP guest workers who returned to their villages commit suicide