Light over the manhole, at last: Manual scavengers win battle

Chennai: Manual scavenging will soon be a thing of the past, at last and for sure. At least for these 12 women and six men of Chennai who have been cleaning up the filth on train tracks and sinking into the drains every now and then for livelihood risking multiple ailments, even asphyxiation. 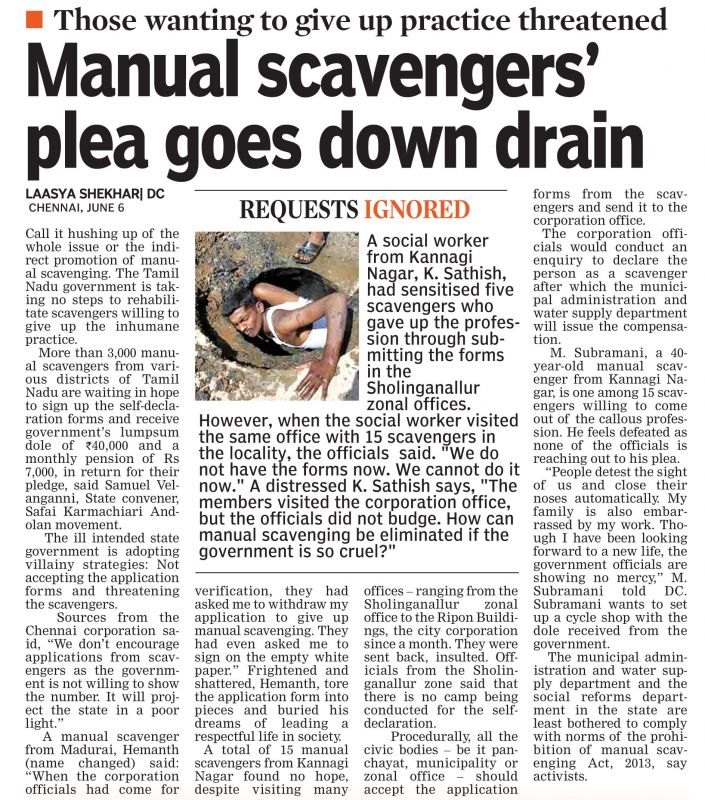 Emerging from the Chennai Corporation headquarters at the Ripon Building on Thursday after signing the necessary forms for releasing them from the ‘filthy bondage’, they were all smiles as now they will get Rs 40,000 as a lump sum grant and Rs 7,000 pension every month, to start any vocation of choice. And lead a clean, safe and dignified life.

It took a lot of effort and several trips to multiple offices in the Corporation before they managed the feat that would not only liberate them, but also set a precedent for over 3,000 others in the state craving for cleaner lives.

“We just submitted the self-declaration forms to the Solid Waste Management (SWM) department of the Corporation stating we are quitting manual scavenging and seeking the relief dole. I have been cleaning drains for a little over nine years. Finally, the future looks bright”, said M Subramanian, 40, of Kannagi Nagar, who has been cleaning the blocked drains of the Metrowater.

“When I get the money (Rs 40,000), I will set up a cycle repair shop. My family is happy”, he said, while thanking Deccan Chronicle for strongly, and persistently, campaigning against manual scavenging as an inhuman act.

“We have been pleading for many years for alternative livelihood options. Our families are looked down upon by the others and when I am out on the job, I cannot even get a glass of water from a nearby family”, said M. Hemanth (name changed) of Chemmanchery, who has been ‘on private calls’ to clean blocked drains in the city for many years.

These two men and the rest of the 18 in Thursday’s beaming team were helped by kind officials in the Ripon Building, including Heath Education Officer Dr T.G. Srinivasan and Superintending Engineer (SE) D.K. Mohan in the SWM department, as Commissioner D. Karthikeyan was not available. Understanding their inability to write, the SE had summoned his officials to fill up the forms in Tamil.

Having faced insults from the corporation staff the last time they went to submit the forms, the scavengers now left the Ripon buildings with wide smiles.

Muslim marriage is a contract and not sacrament unlike a Hindu marriage: K'taka HC