Hyderabad: Locks give way to threads, yet faith remains strong

There appear to be more red threads than locks at a tree guard, above, on the premises of the Moula Ali Shrine on Saturday. (Photo: Deccan chronicle)

Hyderabad: The tradition of locking one’s wishes at the Moula Ali shrine for fulfillment is gradually fading away.

Earlier, those with a wish would climb up to the shrine, put a lock on one of the chains hanging at the shrine or on a grill and take away the key. Once the wish was fulfilled, the fortunate devotee would return, unlock the lock and take it away with him or her. However, these days red threads are replacing the locks at the famed shrine.

Caretaker of the shrine, Ashraf Ali said, “In the past few years devotees used to place locks to fulfil their vows, but most of them now tie a thread. The main reason for it could be the threads are cheaper compared to locks.”

He noted, “People from all religions come to this shrine and pay their respects. The trend of placing locks started over a century ago and it still continues. However, volumes of locks have reduced. Nowadays, threads are all too visible, locks are fewer. Devotees place the locks or tie threads if they have a mannat (wish) to be fulfilled, they make the wish and place the lock. Once their wish is fulfilled they remove the lock and distribute food among the poor.” 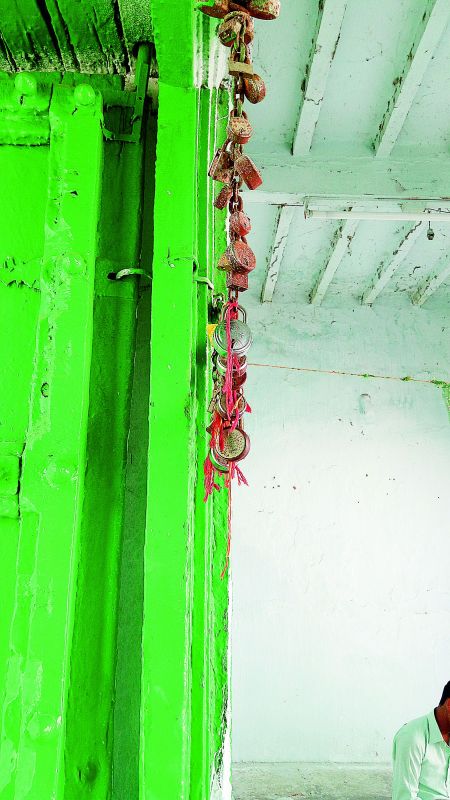 Threads and locks, put up by devotees, hang from an iron chain on the doorway to the shrine.

Zakir Ali, another caretaker, said, “Many people have many wishes to be fulfilled, people generally pray for marriage, children, job and success. Most of the wishes of them are fulfilled. Every month around 30-40 locks are placed now. Earlier it used to be around 100 locks. However, the belief of devotees is as strong as always. It is so since everybody’s wish is fulfilled. No one returns empty-handed from this place.”

It is to be believed that a vazir (minister) named Yakoob in the court of Ibrahim Quli Qutb Shah had a dream in which Hazrat Moula Ali, the son-in-law of Prophet Muhammad, bowed by putting his hands on a rock thrice. The vazir started searching for rocks locally and was guided to this hill. He noticed the impression of a palm on the rock.

The vazir had the impression cut out and installed there. The place became a shrine and people of all faiths come there and pray.

As per Shia Muslims, Hazrat Moula Ali was the first Imam and successor to Prophet Muhammad. For Sunni Muslims, Moula Ali is the fourth Khalifa. For all Muslims, he is among the most revered figures in Islam.