Tech that: Are EVMs really tamper-proof?

DECCAN CHRONICLE. | DEBANISH ACHOM
Published Mar 22, 2017, 1:27 am IST
Updated Mar 22, 2017, 7:07 am IST
Despite strong defence by the Election Commission, tech researchers have claimed the machines can be rigged.

The first widespread use of EVMs — comprising a punch-card and a computer to tally the votes — was in the 1964 US presidential election in seven counties.

The brouhaha over the electronic voting machines or EVMs is nothing new. Leaders — cutting across party lines — have in the past raised doubts on the machines’ integrity. Some researchers have even claimed that they could break into EVMs.

In 2010, the BBC reported that after connecting a home-made device to an EVM, University of Michigan researchers were able to change results by sending text messages from a mobile phone. Hari Krishna Prasad Vemuru, managing director of Hyderabad-based NetIndia Pvt. Ltd, a technology solutions firm, have showed on local TV how an EVM could be rigged.

Mr Vemuru who also participated in the University of Michigan research, claimed, “The EVM chip could be replaced with a lookalike and instructed to silently steal a percentage of votes in favor of a chosen candidate”. “Until that time, the ECI had been claiming that their EVMs were in safe custody," he told Medhanet, a technology consultancy website.

He was arrested for allegedly stealing an EVM from Mumbai, and was later released. He claimed a person gave him the EVM to see whether it could be broken into. He said he returned the machine to the person after showing how it could be rigged.

One of the reasons why allegations of EVM tampering refuse to die down could be lack of trust in technology. What happens after one pushes that button on the machine rests on blind faith in science.

A parallel may be drawn on such a lack of trust in digital devices from demonetisation in November 2016. Before high-value notes were banned, mobile wallet firms struggled to make decent money although the infrastructure was sound.

The first widespread use of EVMs was in the 1964 US presidential election in seven counties. In 1975, the US National Bureau of Standards published a study, which identified three main problems in using computers to tally votes. They were: “Management failures, such as failures to institute adequate equipment and procedure testing; human operational failures, such as errors in operation of computing equipment, and technical failures, such as program errors...”

In India, EVMs made in 1989-90 were used on an experimental basis for the first time in 16 Assembly constituencies in Madhya Pradesh (five), Rajasthan (five) and Delhi (six) in the 1998 Assembly polls.

The Election Commission of India has maintained that the machines cannot be tampered with. The ECI has relied on science and the finality of electrical signals in its defence and has avoided walking on the quicksand of political accusations. But allegations of tampering have flown thick and fast. 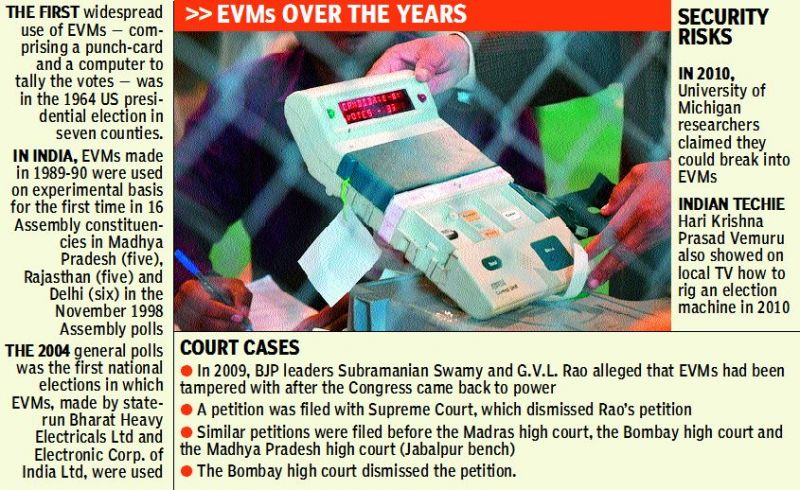 Back in 2009, when the United Progressive Alliance came to power again after the general elections, Bharatiya Janata Party leaders Subramanian Swamy and G.V.L. Rao found something fishy with the EVMs.

Rashtriya Janata Dal chief Lalu Prasad Yadav recently told reporters that the EVMs should be examined as they “were made in Gujarat and were supplied from there”. Prime Minister Narendra Modi belongs to Gujarat.

The Supreme Court in 2009 dismissed Mr Rao’s petition. The election watchdog then came out with answers detailing point-by-point steps on the process that it followed to check “alleged fallibility” of EVMs. Petitions filed before at least three high courts were also dismissed.

But the results in the recently-held Assembly elections have once again caste doubts over the integrity of the EVMs. The Aam Aadmi Party, nursing a grudge against the winners in Punjab, and the Bahujan Samaj Party, unable to fathom why it lost the plot in Uttar Pradesh, want the authorities to check the integrity of EVMs. The Samajwadi Party has also joined the chorus.