Ajmina( dressed up as Manavatti ) providing first aid to her friend who was injured during their oppana performance at main venue- Police ground.

KANNUR: Is Kalolsavam just a celebration of students, as manifested by thousands of spectators thronging each venue to enjoy young stars taking out their best? The answer is definitely ‘No’.Few incidents that happened during last few days show how hardworking they were to win the race rather than enthral the audience. Children collapsing before the competition and then making them perform 'putting in their hundred percent' is the actual scene at the venues. Waiting for hours their turn with heavy costumes and sticking make- ups on, and the delay in the programmes due to the flood of appeals, leave the children utterly exhausted - both physically and mentally.

Oppanna, Group Dance and Kathakali participants fell unconscious in the green room as their events dragged on for more than an hour and some of them had to be taken to the hospital. Seeing these scenes, few parents also collapsed on the backstage, not being able to cope with the tension. They also reached the hospital. A good number of group events started two hours late and lasted till 9 am the next day. The best example was the group dance competition on Friday which finished at 8 am on Saturday. One of the girls from Thrissur got seizure twice but performed and was taken to the hospital immediately after their show. The drama of both the HSS and HS sections supposed to be finished by 11 pm, ended at 10 am the next day.

The 57th edition of the state school Kalolsavam will conclude on Sunday  after six days of  memorable performances  by the participants.  Kozhikode and Palakkad  are vying for the coveted trophy  closely followed by hosts Kannur  after edging out the rest  from the close race.   “If Kozhikode makes it,  it will be for the eighth consecutive year that the district will be winning the overall trophy,” said the director of public instructions. The  winner will be presented with the 117.5 sovereign gold cup.   Opposition Leader Ramesh Chennithala will inaugurate the concluding ceremony and present the overall championship trophy to the winners.

Education Minister  C. Raveendran will preside and Ports Minister Kadanapally Ramachandran, who is also the chairman of the Kalolsavam organising committee, will present a report. The  festival manual will be amended  from next Kalolsavam onwards. The education minister will  also announce the next host of  the festival. The education minister will speak about the amendment in the manual of the festival from next Kalolsavam onwards and will also announce the next hosts for the festival.

Language no bar for Yakshagana

Thanks to the effort by a few school teachers in Kozhikode district, Kasaragod's monopoly over Yakshagana, the traditional theatre of coastal Karnataka, has ended. Now students from across the state, no matter what their caste, religion or creed is, have taken to the art form, though for the limited purpose of competition at the Kalolsavam. Madhavan Nettanika, a master in Yakshagana, has come to this edition with his ten groups from ten districts and he says the students grasp the Kannada language for it in a short span of time.

“Even though their accent is not that proficient like the students from Kasargod, they are giving their best,” said Mr Madhavan. He has been training students from all the districts except Kasargod in Yakshagana for past one decade. Three months of rigorous training help them excel in the language, and they perform well. “It was 15 years back Harindra Master from MJ HS School Kozhikode requested the government to include this art form in Kalolsavam. Later, after a protest at the venue, MA Baby (who was education minister 2006-11), made the announcement adding this as competition item," he said. "Or else we would have been still sitting in our small village, performing before our people again and again. Hence we extend our gratitude to the people of Kozhikode." Besides 14 Yakshagana teams, three groups came through appeal to perform.

P.T. Sandeep lost his father who was working with Kerala State Road Transport Corporation (KSRTC) in an accident at the depot. He was dreaming it big for his son. But Sandeep's dream of becoming a dancer and perform at the Kalolsavam did not end with the untimely death. His father’s colleagues at KSRTC came forward with a helping hand. With their financial assistance, he could fulfil the dream of his father who was also a great art lover.Coming from Perambra, a small town in Kozhikode district, his love was always for Kerala Natanam, and he was competing with more than 30 participants in the category.

The student of Perambra Higher Secondary School has emerged the winner securing A Grade.  Sandeep is getting free training in various dance forms from  Bharatanjali Madhusud-anan.“I would say it is from my mother Jayasree I got this interest in dance and she was pursuing her graduation in Bharatanatyam when my father passed away," he said. "Since then she could not pursue her passion, as she was the only bread- winner. Hence I am here to fulfil her dreams." Not just the money needed for the dance, his father's colleagues and friends were taking care of his studies as well.

The High School Folk Song competition maintained high standards with a flawless performance of participants. Folk lovers gathered in large numbers at the St Michael’s AIHSSS to witness young talents perform, chronicling Kerala's old and rich folk culture and music. Folk song competition required all the seven members of the team simultaneously singing with traditional percussion instruments according to the type of folk song they selected.

“All the participating teams performed well and selected different varieties of songs. It is also good to see that they selected appropriate venues,” said T.K. Suresh Pallikkara, who trained the students of Ideal HSS, Kadakassery.
“In earlier editions, folk songs competitions were held at venues inaccessible to the public without proper facilities. However, here we got the kind of stage which both participants, as well as the public, enjoyed the competition.”

“It was a good experience hearing such songs and also to create awareness about the different cultural symbols and songs of various communities in our state,” added Baburaj, a connoisseur from Kannur. The competition rules say that the song selected should be already existing and sung by some communities. The instruments should also match with it. So, the students and trainers have to visit the members the older generations of a particular community to get the songs as well as the lyrics, singing style and instruments they use.

Cloth for a trophy for stage artistes

The marathon drama competition for high schools, with 31 participating teams, was going on at St Michael’s AIHSS late Friday night. A surprise announcement during a break asking team managers to assemble near the venue made many looking at the corner of the stage. District collector Mir Mohammed Ali was standing there along with Thalassery sub-collector Rohit Meena and assistant collector Geromic George. Soon they were joined by Kadannappally Ramachandran, the 'minister-in-waiting' for the young talents, mayor E.P. Latha, deputy mayor K.K. Ragesh, district panchayat president K.V. Sumesh and vice-president P.P. Divya. 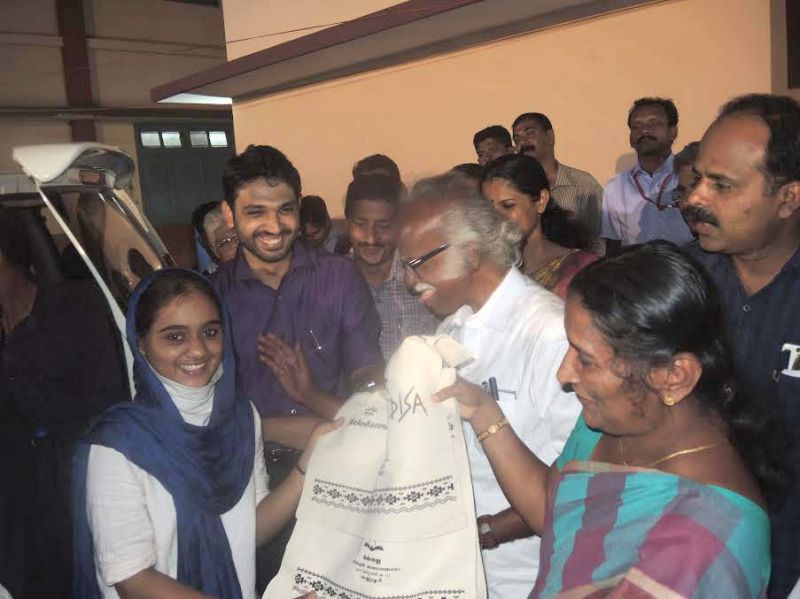 The team managers, who had no clue, were given a surprise pack of cloth bags by the minister and later by other dignitaries as a gift from the district administration. It was part of the Clean Kannur initiative to make the district plastic-free and also to promote the use of reusable products. They had also implemented green protocol at all venues, which earned praise from the education minister the other day. “It is indeed an inspiration for us to take it back to our places and launch a similar campaign in our school,” said O. Bindu, an escorting teacher of Karunagappally Girls High School, Kollam. “Through sponsors, we have already distributed thousands of cloth bags to participants.  Hope this campaign would help the younger generation to work for an eco-friendly plastic free society,” said Mr Ali.