Though located along a busy road, the tomb is deserted with plaster on the dome and walls peeling off leaving black patches. (Photo: DC)

Hyderabad: Like many historical monuments in the city, the 133-year-old tomb of Saidani Ma Saheba at the entrance of Tank Bund from Secunderabad side is lost in concrete and lies in neglect.

Other than its architecture, the structure is one of the few magnificent tombs built in memory of a commoner.

The tomb in Mughal and Qutb Shahi styles with elaborate stucco decorations and fretwork screens (jalis) was built by Nawab Abdul Haq Diler Jung for his mother Hazrath Saidani Ma Saheba in 1883. 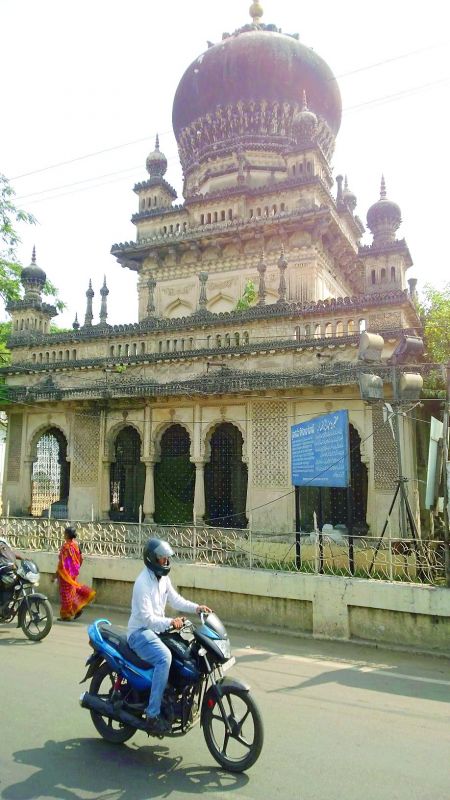 Diler Jung was a senior official during the reign of the sixth Nizam, Nawab Mir Mahabub Ali Khan. The floor of the tomb covers the grave. The tomb of Diler Jung is towards the northern side of his mother.

Though located along a busy road, the tomb is deserted. The plaster on the dome and walls is peeling off leaving black patches. There is dust everywhere with weeds taking root.

“The board has to be changed but there is no money. Money is the biggest constraint in the maintenance of monuments,” an official said.

According to a local, a watchman takes care of the premises but it’s not properly maintained. “Very few people visit this tomb. If the place is cleaned up and neatly maintained and publicised, the number of visitors will go up.”

Dr Mohd Safiullah, honorary managing trustee of the Deccan Heritage Trust, said the tomb was known for its grand architecture built in memory of a mother, a commoner, which is rare. “The government should renovate it on the lines of the Qutb Shahi tombs,” he said. The tomb has a graveyard at the rear, and a Wakf building occupied by retailers selling, among other things, engine oil.

Restaurants, bars in Maharashtra likely to open next week