A tribal hamlet in Peppara Wildlife Sanctuary that resists change

DECCAN CHRONICLE. | R AYYAPAN
Published May 21, 2017, 3:43 am IST
Updated May 21, 2017, 7:57 am IST
Tribals in Anakaal in Peppara Wildlife Sanctuary resist electricity, education and even medical care.

District Child Protection officer Subair and other NGO volunteers visit tribal huts in the Anakaal hamlet of Kottoor in Thiruvananthapuram to canvas drop-outs and other children who never went to school, for a summer vacation camp 'Agasthyante Poompattakal' organised by social justice department exclusively for tribal children at Podiyam on Saturday. (Photo: PEETHAMBARAN PAYYERI)

Thiruvananthapuram: When district child protection officer Subair, activist Sreenesh and tribal promoter Santhosh entered Anakaal, the deepest tribal settlement inside Peppara Wildlife Sanctuary, after driving more than an hour through wicked forest terrain and trekking five kilometres through dense forest on Saturday, there was absolute silence. It was just before noon, and there was no one in sight. Not even the dogs crouched before starched bamboo leaf huts scattered far and wide were barking.

The silence seemed eerie. It was just a while ago, while resting on a rock along the forest path, they had come across at least five groups of Kani tribals proceeding towards Anakaal from the market in Kottoor some 25 kilometres away. They had even smiled and exchanged pleasantries. “I think they are keeping away from us on purpose,” Subair said. 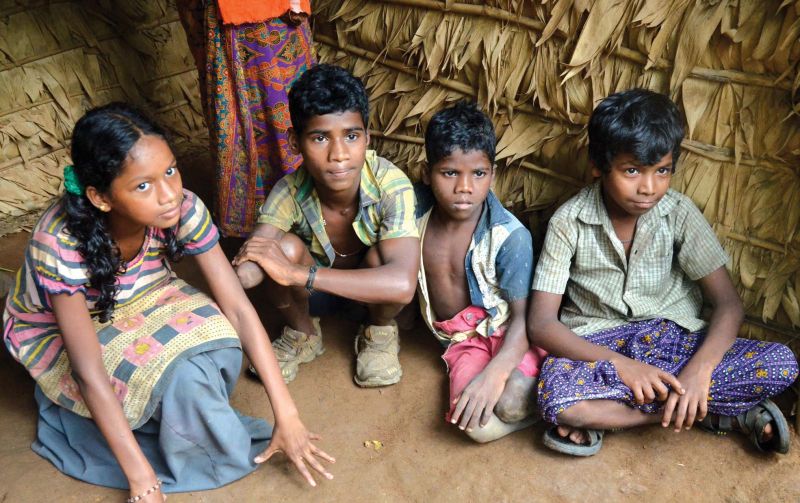 The DCPO had been visiting Anakaal since January this year, trying to convince the tribals to send their children to school. Anakaal, a settlement of 14 huts spread over 50 acres, is the only settlement inside the forest that does not send its children to school. It is not just education, Anakaal tribals are aggressively against any sort of development. Last week when KSEB workers reached Anakaal to dig trenches for underground cables as part of the ‘total electrification’ project, the tribals attacked them. The workers took refuge inside an abandoned school till their colleagues arrived to escort them away. All the 26 other tribal settlements inside Peppara will get electricity by the end of this month. Anakaal is also the only settlement that does not have concrete brick houses provided by the panchayat. It does not have even a dirt road connecting it to other settlements. 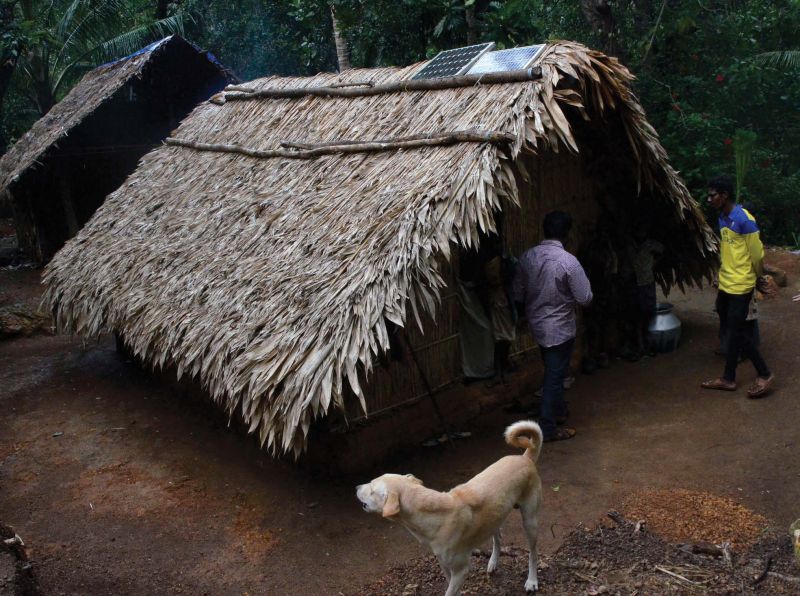 A tribal hut at Anakaal.

On Saturday, Subair had a less ambitious target. He wanted Anakaal parents to send their children to a vacation camp the Social Justice Department is organising at Podiyam, a tribal settlement some 15 kilometres from Anakaal. There was no one in the first three homes Subair and his team entered. Just as he was moving towards another hut, he spotted sudden movement in the green surrounding the area. He waited. A fairy-like being with wild flowers in her ears came out of hiding. “Parvathy,” Subair called out. “Come here,” he said.

Parvathy, a 10-year-old girl, was the brightest student in her class till her parents brought her to Anakaal a year ago. “Now she has stopped going to school,” Subair said. After much persuasion, she agreed to attend the vacation camp. Once she emerged from hiding, her cousin brother, Ayyappan, came out of a hut nearby. He was shorter but of his age, and his teeth were badly stained from betel chewing. (Most of the boys had stained teeth.) His father agreed to send him. Now the team had two kids.

The two of them then led the team further up to a hut where there were two kids, a 10-year-old boy and a toddler girl with a weakness in her left leg. The father refused, no logic worked with him. Subair wanted him to at least show the girl to a doctor. “We can easily rectify her handicap,” he said. “Humans can’t change what God had willed,” he said.

The resistance is led by Mathan Kani, Anakaal’s tribal leader. “Our forefathers have said education will bring misery upon us,” he said. He claims to have sent his first born to a school. “Two weeks later he came back but when he got up the day after, he couldn’t lift his hands,” he said. Subair pointed to the steel utensils found outside the hut, and the shirt he was wearing, and told Mathan Kani that it would be futile to resist civilisation. Mathan went inside his house and came out with a bag exquisitely crafted out of bamboo skin. “You people want to teach our kids and take them away. How will they then learn the skills we have bequeathed from our ancestors,” he said, holding the bag in front of him.