New York: RBI Governor Raghuram Rajan, tennis star Sania Mirza, actress Priyanka Chopra, Google CEO Sundar Pichai and founders of Flipkart Binny Bansal and Sachin Bansal have been named by Time magazine in its list of the '100 Most Influential People in the World'.

Terming Rajan as "India's prescient banker," Time said he is among a rare breed of "economic seers" who he "steered" India through the global crisis and fallout, "playing a large role in making it one of the emerging-market stars of the moment.

While serving as the youngest chief economist of the IMF from 2003 to 2006, Time said Rajan predicted the subprime crisis that would lead to the Great Recession, standing up to critics like former US Treasury Secretary Larry Summers, who labeled him a "Luddite".

"Since then, more and more of the economic establishment has come to share Rajan?s view that debt-fueled growth is just a saccharine substitute for the real thing," Time said.

In a profile for Mirza, cricket superstar Sachin Tendulkar writes that her "confidence, strength and resilience reach beyond tennis" and she has inspired a generation of Indians to pursue their dreams "and to realize that they can also be the best."

Tendulkar described Mirza, who recently was awarded India's third highest civilian honour the Padma Bhushan, as an "inspiration" on the court. He lauded her "dedication and willpower" to reinvent herself fully as a doubles player when her singles career was cut short by wrist injuries.

Prime Minister Narendra Modi, who was among the probable contenders for the list, was not in the final list determined by Time?s editors. Modi was among Time's 100 most influential people in the world last year.

On Chopra, who was awarded the Padma Shri this year, actor Dwayne Johnson said she is a "star rising higher" and lauded her "drive, ambition, self-respect, and she knows there's no substitute for hard work." 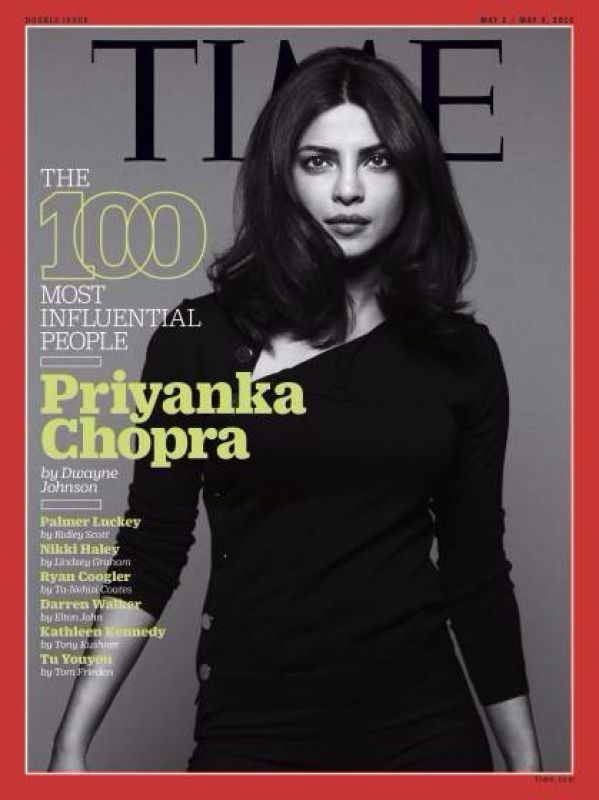 Time said Flipkart founders Binny Bansal and Sachin Bansal may have come across as arrogant when they told investors the company they started in 2007 as an online bookstore could be worth USD 100 million in a decade. "It turned out to be modesty: Flipkart now has 75 million users and a USD 13 billion valuation," Time said.

The Chennai-born was the "head guy" on Google Drive and worked on Google Chrome, Gmail and Android phones and the world is now watching what he comes up with next, Nye said in his profile.

On activist Sunita Narain, author Amitav Ghosh said her ideas have shaped some of the "key debates of our time" and "hers is a voice that urgently needs to be heard in this era of climate change.

"As an activist, Narain is a pioneer," he said, adding that she and her organization New Delhi-based Centre for

Science and Environment, have been campaigning to reduce the Indian capital's dangerous air-pollution levels for almost two decades.

"The way Aziz talks about his ethnicity and career is so interesting, and the entertainment-industry world he writes about is hysterical and on point," his colleagues from the industry Ilana Glazer and Abbi Jacobson said.

On Panjabi, who at 9 had escaped a civil war in his home country of Liberia former, US President Bill Clinton said, "to spend time with Raj Panjabi is to see up close what happens when someone with uncommon courage and compassion puts himself on the front lines of the worlds most complex challenges."

Clinton said the "heroic work" Panjabi and and his’organization did to train 1,300 community health workers in Liberia was critical in helping the government contain the Ebola epidemic.

On Suu Kyi, Obama wrote for the Time that "The Lady" remains a "beacon" of hope, "now more than ever," for 50 million people reaching for justice, and for millions more around the world.

Time Managing Editor Nancy Gibbs said the people on this year's list "have lessons to teach. We can debate those lessons; we don’t have to endorse them or agree with them. But the influence of this year’s TIME 100, to my mind, is that down to the last person, they have the power to make us think. And they are using it."

Liquor outlets to remain open up to 10 pm in AP