Kannur: The  school Kalolsavam sparkled on the fifth day on Friday with the much-awaited dance items, including  group and folk dances.  Oppana was staged at the main venue from  morning till  3 p.m. and later the group dance under higher secondary category which drew a huge audience. Group dancers thrilled the viewers with their variety of costumes, dance formations and musical  rhythm.  However,  the contestants also had to  shell out lakhs  of rupees for their costumes and other items.

Mr Jobin Joseph,  dance choreographer from Wayanad,  who has been training students in various dance forms for more than a decade, said that  he had  four teams participating from Palakad, Kannur, Wayanad and Kottayam.  A group shells out  Rs 3 to 4 lakh for each performance. “Our students had set a standard in costumes and make-up for the group events in addition to the themes we select.  This year we  made  costumes using expensive stones and tissue material for most of the groups,” he added.

“Ornaments have also been specially crafted,” he said.  “For the last six years our students have been  bagging the first position,” he said. In addition to the 14 teams, seven teams performed which came clearing the appeal procedures from the district Kalolsavam. “Group dance events are turning more expensive,” said Sunantha Suresh, mother of a group dance participant from Kozhikode. Last year  the total expenses for costumes alone were Rs 2 lakh,  but this year the amount has  doubled. Apart from costumes, accessories, props and the trainer’s fee add to the cost, she said.

Nayana Jasmine from Thiruvananthapuram scored with her  mono act on demonetisation, a topic that none else attempted at the state school Kalolsavam in Kannur.  Jasmine, ninth standard student of D.v.M.N.N.M. HSS, Maranallor, Kattakada, bagged the first prize in the high school category  by presenting the problems faced by the people following demonetisation.

She began with the lines, “I am in queue, please don’t disturb me,”  and highlighted the ordeals of  the common man  who suffered in the wake of the government decision. “I changed my subject a few weeks ago to deal with a current topic and  be different from the routine ones,”  said  Jasmine. The  girls did better in  mono act than boys, said the judges on Friday.   The other topics included  harassment of women, children and  dalits  and the social media.

The audience at the Kalolsavam venue was  moved to tears when a student from Wayanad  recreated the life of the late actor and singer of folk songs, Kalabhavan Mani, in his  folk dance performance. Some of  Mani’s folk songs were edited and mixed with the folk dance song written by  Jyothish K. Nair of Chalakkudi, the native place of   Mani.    K.V. Sreeraj,   Plus-One student of GVHSS, Mananthavady,  in his 10-minute  folk performance,  highlighted the contributions of Mani to the film world and folk songs,   whose death had shocked the art lovers.

He   won the hearts of the audience and the judges at venue 3  and  was awarded the first prize with A grade. Sreeraj thanked the writer of the song  and said, “Jyothish penned  each word  from his  association with Kalabhavan Mani and  gave me a lifelike picture of the legend.”   After his performance, the  audience cheered him loudly.

The grievance redressal cell  set up by the education department has so far received just 17 complaints during the 57th school Kalolsavam and all the complaints were sorted out immediately, according to officials.   The redressal cell is working round the clock under a district educational officer along with  a VHSE senior superintendent, superintendent and a computer expert. The cell’s functioning is monitored by the deputy director of education. 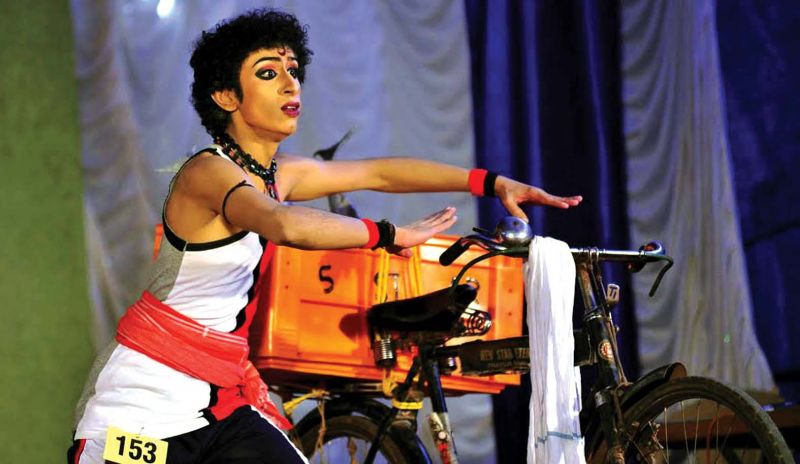 However, the cell has no power to entertain complaints related to judgments which would directly go to the DPI. “Despite many hundreds that came here with complaints, we were able to solve them  within minutes. So far just 17 written complaints were received and registered and all of them were sorted out,” said Talipparamba DEO Balachandran who is in charge of the cell. A software developed by IT@School helps the officials to monitor the status of the complaint.

Ajmal, the son of a butcher, stole the show in the drama competition  in the high school section that was staged at St Michael’s HSS venue  of the school Kalolsavam on Friday.    Ajmal and his team from  Peringode Government HS excelled with their play titled  ‘Valuthaavaan kure Cheruthaavanam’  (To become big, one has  to become small first) and won special mention from the judges.  The  boy, who plays the lead role, came to the stage in torn trousers  with the replica of a buffalo and verbally clashed  with another character  who  owns an elephant. 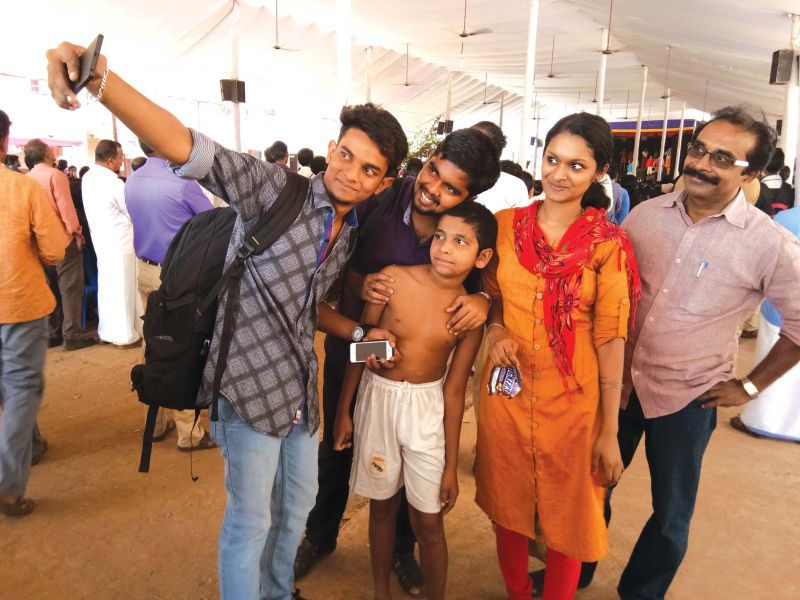 Ajmal (in shorts) takes selfie with his fans after his performance. (Photo:DC)

The crowd cheered Ajmal for his  acting skills. He later  told DC that he was enacting  his own life  with a different take in the end. Priyadarshan,   director of the play, said, “Ajmal  is a very active student and  was  unanimously chosen by the  teachers for his liveliness to play the lead role.    It was after talking to Ajmal that we created the story and added a message to it,” he said. The  majority of the plays in the HS category were appreciated  for their  simplicity and strong messages. According to Jino Joseph,  state award winner for the best drama, the directors had selected  interesting themes other than   politics. A large crowd had thronged  the venue till late night to view the performances. The results would be announced later.