The minister said 11 large zoos had been evaluated in 2013-14. None of these fell under the ‘excellent’ category.

Hyderabad: The country’s zoos, including the Hyderabad Zoo, are not doing well. Statistics kept under wraps by the Central Zoo Authority, the Union ministry of environment and forests and the Telangana state forest department, on rankings given by CZA in 2014 to 11 major zoos, has come to light recently.

In March, when AIADMK MP K. Kamaraj of Kallakurichi, Tamil Nadu, asked about the performance of zoos in the Lok Sabha, forests minister Prakash Javadekar had replied that the CZA had formulated a grading system to evaluate the performance of zoos on 10 parameters. The maximum score for each parameter was 10 and zoos would be evaluated on 100 points. Those that scored above 75 would fall under the ‘excellent’ category.

When contacted, CZA officials did not say whether Hyderabad was among the 11 zoos.A senior official from the Telangana forest department said, “I did not know about it until recently when I visited New Delhi for an official meeting. The Hyderabad zoo scored 63.5 points.”

The reason why zoos in India performed poorly was made clear on the Facebook community of scientists, Indian Scholars Discussion Group, where a senior scientist and wildlife expert from the Centre for Cellular and Molecular Biology raised some concerns regarding the issue.

The major concerns raised include fears on food and safety. Research conducted at the CCMB in some zoos revealed that mutton was being fed to carnivores in the name of beef.

On safety, it was reported that people often jumped into enclosures and that there was a lack of transparent mechanism to keep tabs on the treatment of wild animals in the zoo by staff along with a  lack of an efficient redressal mechanism. 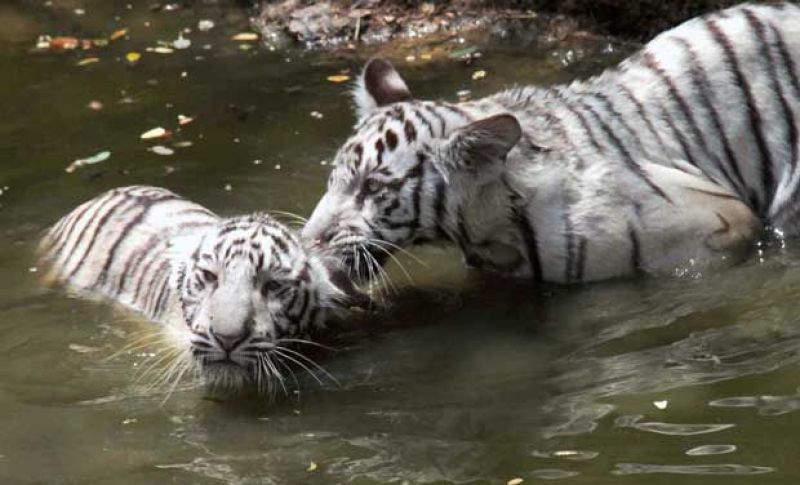 One of the major concerns at the Nehru Zoological Park in Hyderabad is that of polluted water from the nearby Mir Alam Tank.

The zoo was given 63.5 points out of 100 by the Central Zoo Authority in its grading system, in which “sanitation and hygiene” was one of the parameters.
Polluted water from

Mir Alam Tank seeps from the ground not just into the moats of wild animals but also in the lake located in the zoo, which might lead to health problems for the animals in enclosures as well as the free-ranging spotted deer.

Recent incidents in the Hyderabad Zoo, of animals escaping from enclosures and people entering restricted areas, have also raised a big question on the safety aspects in the zoo.

A senior zoo official said a Central government committee is expected to visit the zoo later this year.

“We are doing our best so that the zoo gets a better score,” he said. There was a plan to carry out phytoremediation of the water in moats wherein plants with properties to clean water of pollutants will be planted.

“We are planning to develop moats in such a way that there is continuous flow of water so that the water gets adequate oxygen, which will help in purifying it.”
He said the zoo had acquired 30 animals recently, many of them being mates for single animals. “I am sure all these measures will help in increasing our score,” he said.