Satellite image dated March 26, 2017 of a part of the Eturunagaram forest in Telangana. The yellow polygon demarcates a cultivated/inhabited area as on December 1, 2011, and the red polygon shows the spread of the same habitation as on March 26, 2017.

Bengaluru: Satellite imagery analysis by the Forest Survey of India (FSI) has shown that there has been vast deforestation due to encroachment and clearing since December 13, 2005, the cutoff date specified in the Forest Rights Act (2006) for individual claims to land within India’s forests.

Under the Forest Rights Act (FRA), people in occupation of forest land as on December 13, 2005 are eligible to claim pre-existing forest rights. These claims have to be verified by the gram sabhas and awarded to deserving beneficiaries as per norms.

The FSI, in an affidavit filed before the Supreme Court, has said that 71.06 per cent of the individual claims filed under the FRA were illegal, meaning that the land being claimed was an encroachment. In fact, 14 lakh such claims were rejected by the gram sabhas themselves. 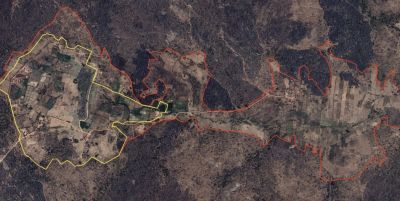 In satelite imagery of the Kawal forest of Adilabad, Telangana, new cultivations and habitations (red polygon) can been seen to have come up far beyond the original habitation (yellow polygon).

A writ petition filed on this matter by three wildlife groups, in which the Union government is a respondent, will come up for hearing this week.

On the basis of this data, a satellite survey of the encroachment position was conducted in 14,259 cases. It was concluded that in 71.06 per cent of the polygons were encroachments, the affidavit stated.

In the Adugundi area of the Nagarahole forest, satellite imagery shows new habitations and cultivated patches (red polygon) sprang up far beyond the earlier habitation and farmland (yellow polygon).

The full name of the FRA is the Scheduled Tribes and other Traditional Forest Dwellers (Recognition of Forest Rights) Act, 2006. Before its enactment, it was referred to a Joint Parliamentary Committee (JPC) for review.

The Draft Bill had three major riders. The Bill meant to extend pre-existing forest rights only to tribal people, in particular to those in possession of the land before the cutoff date of Oct 25, 1980. Most importantly, the extent of land that could be granted to such claimants was 2.5 hectares.

However, the JPC removed all the riders and added another category of claimants, ‘Other Traditional Forest Dwellers’, which is a nebulous definition. Plus, they enhanced the extent of land that could be granted to deserving claimants to four hectares.

This opened up the floodgate to applicants claiming pre-existing rights to land they had been in occupation of. Pressure was brought upon officials by elected reps with an eye on their vote banks to pattas (titles) to all the applicants. As a result, no less than 72 lakh hectares of forest land has been given over to beneficiaries since 2008.

This led to three organizations–Wildlife First, Nature Conservation Society and Tiger Research and Conservation Trust–filing a petition before the Supreme Court questioning the constitutional validity of FRA and seeking a stay on the entire exercise.

The Supreme Court appointed FSI to examine all the claims under FRA and submit a report to it.