Nakshathra Prakash of St. Mary’s GHSS, Alappuzha, who bagged A grade in Bharatanatyam (HS) in the 57th State School Kalolsavam in Kannur on Thursday.

Kannur: Kalolsavam venues were tense on the fourth day on Thursday as the BJP enforced a daylong shutdown protesting the killing of an activist in Dharmadam near here. But as soon the festival gained temper, people started thronging the venues, especially the main venue Nila, taking available modes of transport to witness students taking out their best. To ensure participants and their parents reach there in time, the transport wing of the Kalolsavam organising committee had deployed the maximum number of buses and autorickshaws near bus stands, the railway station and other spots.

But none of the shops including medical stores kept open giving serious trouble to people during the day. So were the eateries outside the venues. The police authorities have deployed additional forces in the city, more on the roads leading to the venues. “Soon after the hartal was declared, we called an immediate meeting to discuss what all measures could be taken to make the day peaceful,” said K.V. Mohan Kumar, the director of public instructions.

"Even though a tense situation prevailed in front of the main venue for some time, it was soon under control thanks to the timely intervention of the police." On the other side, it was the auto drivers who earned fast bucks charging helpless commuters double-fare for each trip no matter how short or far it is. By 2 pm, a BJP procession came in front of the venues, but it went off peacefully.

Kannur struggles to save face

From the moment the district was selected to host the 57th Kerala State School Kalolsavam, parents, teachers and prospective participants were wondering if the place was safe for the biggest gathering of the youngsters in the continent.
From the beginning of the Kalolsavam organising committee, the challenge taken up by the team including the district administration as well as the police was that when the visitors leave Kannur, they should be taking home a different impression of the land, other than that of a violent place.

It was this impression that was shattered with the murder of BJP worker E. Santhosh (52) Wednesday night in Andallur, near Dharmadam, at his house.
He was alone at home at the time of the attack, police said. Four CPM workers from Andallur and Chirakkuni are known to have been taken into custody, though the police is not confirming the arrest. BJP observed a hartal in the district and took the body near the main venues of the Kalolsavam, chanting slogans.

Collector Mir Mohammed Ali told DC that a single incident should not be allowed to tarnish the image of the whole district. “Whatever happened is unfortunate and should not have happened at this time. Already police is probing, and we made sure that no child or parent have been affected. In the morning, voluntary organisations and hotels have served food during hartal, and no visitors have complained about any kind of inconvenience due to the murder and hartal,” said the collector.

Every time Jeevan hears the sound of a helicopter, he listens to it keenly, because it brings back bad memories. This is why Jeevan Raj, a High school student of Kasargod Government AS Vidyalaya, an Endosulfan victim, chose to create the sound of a helicopter as he started his mimicry performance, at the 57th State School Kalolsavam on Thursday at Jawahar stadium. 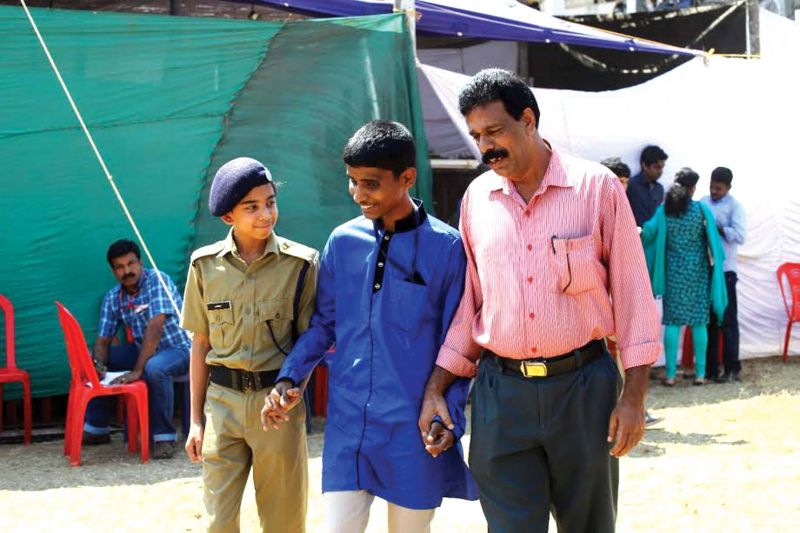 Jeevan Raj comes out with his teacher after his mimicry performance.

Coming from Enmakaje village in Kasargod, Jeevan and his brother Devi Kiran who got first in classical Music, the results of which were announced on Wednesday, live in the school hostel as their parents were struggling to make both ends meet with these two disabled children. It is for the second time, the duo have given an outstanding performance at the State Kalolsavam. The place from where these brothers hail was one of the major regions hit by the Endosulfan tragedy. Equally good in studies, Devi Kiran, the older brother was the top scorer of the school in his tenth examination scoring full A Plus.

Yashika S. Kumar of Thiruvananthapuram had got her slot for Kuchipudi at 2 pm. However, when her performance was over, the clock ticked well past 1 am the next day. Many students are going through a similar experience at Kalolsavam venues, thanks to hundreds of appeals as well as inadequate arrangements. The delay is affecting their performance and giving mental agony for them and their parents. “Every year the situation is the same. The children wait for hours after putting on the makeup for their call. They can’t even go to the toilet with that,” said Sunil Kumar, a parent from Thiruvananthapuram.

“These days parents, who have bitter experiences from previous years, know how to deal with it. However, when first timers come, there are instances where they have to wait for almost 12 to 15 hours with the makeup.” The worst experiences are for the parents or teachers of participants who have two items on the same day at two different venues.  “Both of us have to stand near each venue and inform the timing. Accordingly, we have to run with the child from one stage to another,” added a parent.

The state school Kalolsavam venue is one of the best platforms for the Malayalam entertainment industry, especially  films, to get fresh talents from the turf.  When the results of the Higher Secondary School Drama competition were  announced late in the night on Wednesday, the best actor and actress awards were won by  the two characters of the same play- ‘Nagnanaya Thamburan.’ K.R. Gokul and Kavya V. Prakash from Zamorin’s HSS, Kozhikode,  bagged the titles,  but the play  came  fourth with A grade in the competition.   Though the team is excited for the titles, the recognition will not give them any added benefits. The best actor and actress titles are not eligible for the grace marks allotted for the Kalolsavam.

“Both of us were selected after a long process of selection by the director of the play Priyadarshan,”  said Gokul.  “Since both of us come from  financially backward families, this is the only stage where we can show our talents without much expense at  the Kalolsavam venues,” he said. Gokul also had received the best actor award for the district Kalolsavam. Gokul acted as a dominant ruler in the play that is inspired by M. Mukundan’s novel   while Kavya donned the role of the revengeful woman. Both the  stars are aspiring to join the big screen  of Malayalam film industry.