A major elephant corridor runs through the Bannerghatta National Park.

Bengaluru:  Bengaluru’s tribe of green activists have launched a Save Bannerghatta National Park after the state government moved to nibble away at its eco-sensitive zone (ESZ).

As always, development is the ruse cited by Karnataka chief minister B S Yediyurappa in his letter to Union environment minister Prakash Javadekar asking to reduce the ESZ of the park by no less than 100 sq km.

And as ever, the BJP government has proved to be no more environment-friendly than any of its predecessors, although the ruling party’s MPs, P C Mohan and Tejasvi Surya, had expressed ardent support to saving what is a crucial lung space of Bengaluru.

The previous dispensation of the Congress and now the BJP have betrayed the citizens,” said Vijay Nishanth, founder of Project Vruksha.

Environmentalists have always wanted the original 268 km ESZ of Bannerghatta maintained. However, which government has ever not given in to ‘development’ in preference to environmental niceties? The national park’s inevitable fate was only stoppered by the Karnataka High Court, which on January 21 restrained commercial and developmental activities within a 10 km radius of the national park. 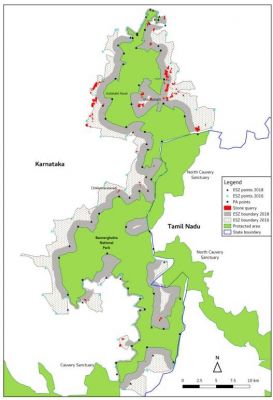 Map showing the mushrooming of stone quarries around the Bannerghatta National Park.

In his letter to Javadekar, the Karnataka chief minister said the 10 km no-go zone was hindering development, so could the environment minister please allow the cheese to be nibbled a bit while the bureaucracy deliberates on the matter?

This nibbling would reduce the ESZ by as much as 100 sq km. Typically, the chief minister’s letter was an exercise in circumlocution: “As per the directions of the Supreme Court an area up to an extent of 10 km around the Protected Area (PA) is considered as default ESZ area till such time of issue of a final notification and for any developmental activities to be carried out within the said area prior clearance from the standing committee of the National Board for Wildlife would be required. Due to this reason, many development projects around the BNP have been stopped as the BNP is adjacent to the Bengaluru city.”

The city’s environmentalists say this will be the death knell of the garden city as we know it. Bhanu Prakash, coordinator of the Bannerghatta Nature Conservation Trust, says, “The crucial elephant corridor (of the national park) and a lung space of the city is in great danger now. The ESZ will be reduced to favour the quarry mafia. If this is permitted, Bengaluru will have the same pollution levels as Delhi.”

Although a final notification defining the ecosensitive zone of the Bannerghatta Park is yet to be arrived at, development activities have commenced within it.

It’s not as if ‘development’ has not already eaten into the ESZ of Bannerghatta. Apart from the mining department, major government bodies like the Karnataka Housing Board have permitted construction within the ESZ. Last year, construction of layouts and road expansion activities commenced even though the boundaries of the ESZ are yet to be notified.

The fabled notification is itself another sub-plot in the mythology of environment protection in India. It begins in circa 2016, when a draft notification proposed a 268.sq km eco-sensitive zone around the Bannerghatta.

Even while this draft was under consideration, the state government requested a reduction in the ESZ area to 181.57 sq km.

In February 2017 a final draft proposal was approved by the cabinet sub-committee, cutting it further down to 168.84 sq km.

B.K. Singh, former principal chief conservator of forests (PCCF) of Karnataka says, "The purpose of an ESZ is to conserve biodiversity and maintain integrity of an area by preventing degradation and deforestation. Activities like industry, mining, etc are prohibited in this zone. But they are justifying the reduction pf ESZ on the basis of a 1991 notification--of a 1 km safe zone. If such a safe zone notification was really useful, why would stone quarrying be so rampant on the fringes of the national park?”

Cops step up vigil on suspects ahead of Independence Day