A participant comes out of the mobile ATM of Kerala Gramin Bank installed at Nila, one of the Kalolsavam venues. (Photo: DC)

Kannur: Due to the overflow of appeals in the 57th State School Kalolsavam, many competitions on Tuesday started late, which resulted in a tussle between the organising committee and parents. On the second day of the festival, the education department registered nearly 1500 appeals in all the categories including High School, Higher Secondary, Arabic and Sanskrit. It was in the higher secondary category that the education department received the highest number of appeals, that is 902, and the number is expected to go up in the coming days.

Under the High School category, 422 appeals were filed. After a tight scrutiny and evaluation, the appeal jury committee approved 460 participants to perform along with the other participants of various competition. Due to the delay in competitions, the some of the major events lasted it 3 in the morning, and the participants had to wait for hours after dressing up without food in the food court.

The Bharatanatyam and Mohiniyattam events witnessed performers, who participated after appeals, finishing in first place in the 57th State School Kalolsavam here on Tuesday. In the Girls’ HS Mohaniyattam event, all the three top places were bagged by contestants who came with the aid of appeals. K Sreelakhsmi of Thrissur CGHSS won the first prize in Mohinayattam, who came with the help of Lokayukta. Sacred Heart Girls’ HSS Thalassery student Thrishala and LFEMHSS Malappuram student MP Prathibha finished second and third. Both of them had come through appeals. 13 more students, who also appealed, got the A grade. St Mary’s HSS Edoor student Nandakumar R, who appealed to participate, won the event.

Spectators at the venue of the Thullal event were agog when Devika V.P. of Kadakkal HSS Kollam entered the stage. The music, attire and steps were entirely different from the usual Ottamthullal performed at the venue here during the 57th State School Kalolsavam on Tuesday. Devika performed Parayan Thullal, one of the three types of Thullal  - the other two are Ottamthullal and Sheethankan Thullal – and it is the rarest of the three. Students usually pick Ottamthullal as their main item because it is easy to learn and perform. Parayan Thullal has different steps and there are only a handful of gurus who teach the art. 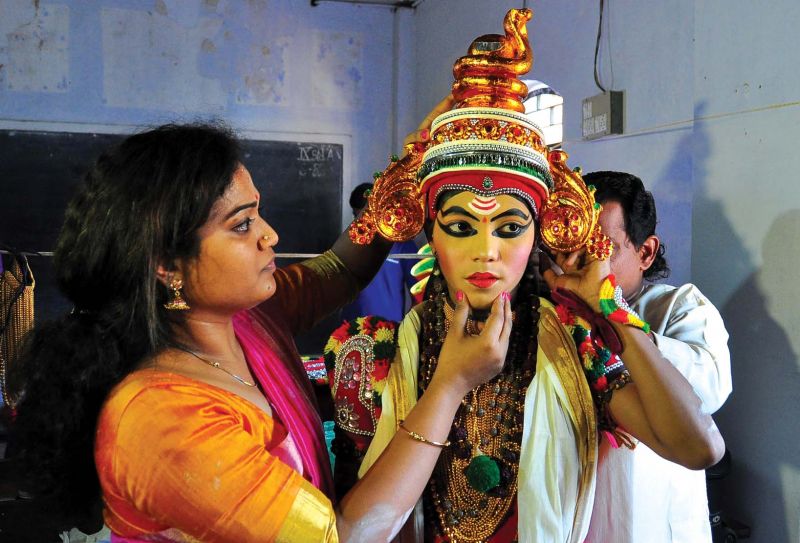 Drishya Gopinathan, the teacher of Devika V.P., helps her to don the crown to perform Parayan Thullal in the 57th State School Kalolsavam in Kannur on Tuesday.

“It is very rare for a girl to perform Parayan Thullal. Earlier, a couple of boys performed it. The interest in the Thullal form is waning as it is difficult to master it. Moreover, the storyline presented through the art form is more to do with religion and morality. The costume is also different and the steps are not fast as Ottanthullal,” said Kalamandalam Prabhakaran, an experienced Thullal guru. His student Drishya Gopinathan taught Devika for the past one-and-half years. “It is for the first time a girl is performing the art. We are sure we will not win, however, we want to make the art form popular. Moreover, a girl performing the Thullal is a rare feat and we wanted to make a change,” said Drishya. Devika, who is participating for the first time, said that her focus was not on finishing first but to learn the art form. “It was a good experience. More than grace marks and first prize, I wanted to show the people that a girl can also perform this art form,” said Devika, who is a plus two student.

Victers channel, an  initiative of  the It@school project, is in the forefront of capturing live all the thrilling moments of the school Kalolsavam being hosted here after a gap of 10 years. The man in charge of this Herculean effort is  Murukan Kattakada,  noted Malayalam poet and lyricist, who is assisted by a  350-member  team.  They  have been working 24/7 to shoot the entire Kalolsavam from its 20 venues with the latest cameras and  equipment. 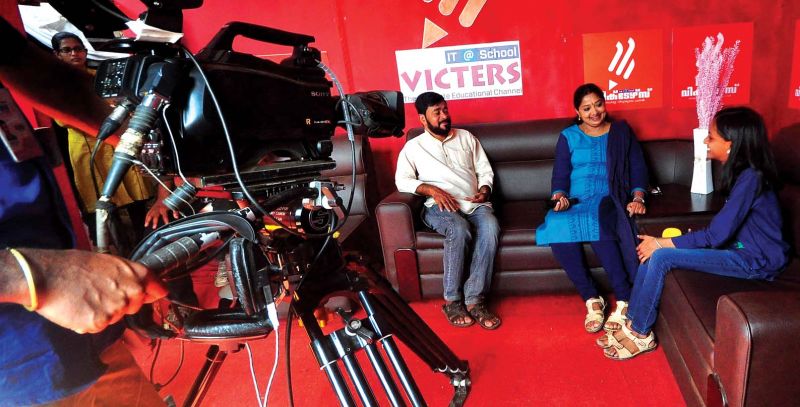 “We started planning for the live coverage  two months ago and we have been trying hard to accomplish  the task,”    he said.   “I am learning a lot from these young people who use  30 camera units.  Victers is also providing  live updates of the Kalolsavam through its web portal,” he added.

Father’s loss did not stop Sukanya from performing

Despite giving an excellent performance in the oppana competition under Higher Secondary category during the 57th State School Kalolsavam at Kannur on Tuesday, a group of girls from one of the teams was seen crying loudly and consoling a girl in the team. It turned out that Sukanya, the one who spearheaded the oppana team for Mavelikara Bishop Hodges HSS, Alapuzhya, performed for the competition just after attending the funeral ceremony of her father Subash.

It was on Monday morning when Sukanya was in her hometown in Mavelikara, that she got to know about the demise of her father after he collapsed during work. He was working as a porter near Mavelikara bus stand. But to fulfill her father’s dream of getting recognition for the state level competition, Sukanya decided to travel to Kannur to perform, or else the hard work put in by the whole team of her school would have gone in vain.  A very keen cricket player and one of the main players of the under-16 cricket team of Mavelikara, Sukanya was a familiar face in Kalolsavam venues, but this was the first time she got state level recognition. 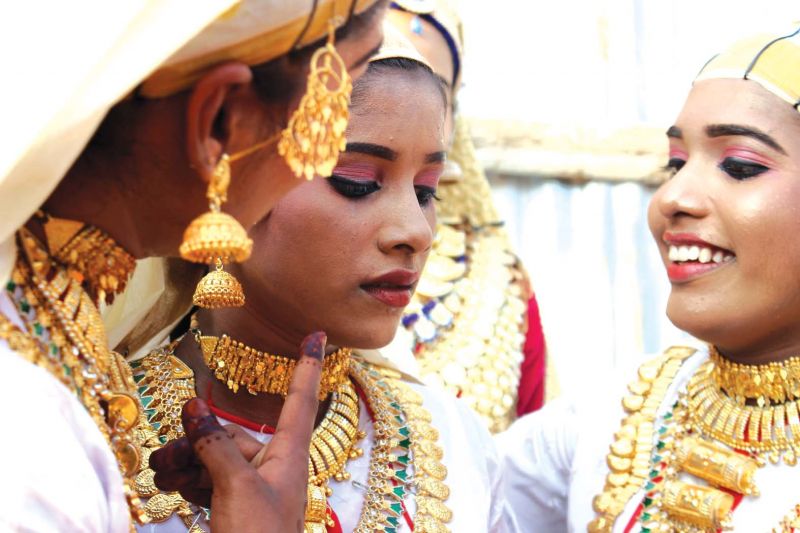 A co-dancer tries to cheer up Sukanya (left).

“None of the teams wanted to perform after hearing about the tragedy, but Sukanya and her family insisted that they go ahead with the competition”, said Arya N, one of the teachers from the school. “What surprised us was that she didn’t show her sorrow or pain during the performance but broke down soon after she stepped off the stage,” she added. After the performance, Sukanya along with her team and teachers went back to her native place to support her mother and siblings.

An unusual guest was present among the audience at the school Kalolsavam here on Tuesday to cheer the western music orchestra representing the Irinjalakuda National Higher Secondary School.  She was  the sari-clad Joanna Caplan from Canada, a professional  theatre artist,  who had been doing research on  Koodiyattam at Irinjalakuda. She had come to know of the school festival from  Vishal, one of the trainers of the kids. 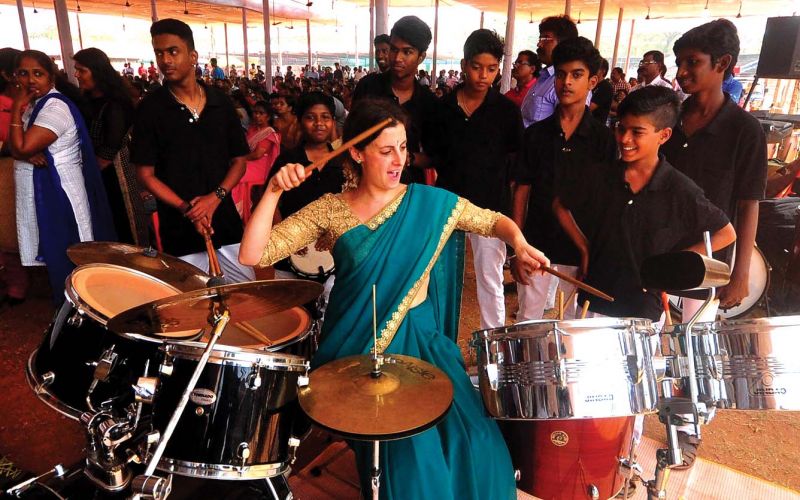 “I have been researching on  Koodiyattam at Irinjalakuda  and I happened to know about this arts festival. It is  a great surprise for me to see so many talented students coming together on one platform to showcase their skills,”  said Joanna. “Back in my country, sports is given such encouragement, but not arts.  I will stay back  to learn more about these traditional art forms in Kerala,” she added. The students of National HSS scored ‘A’ grade for the western music orchestra with their fusion music blending both western and Indian instruments  and using  shell to make the banging sound.