5. 20 marks will be allotted for the project and final marks scored by each student will be included in the final exam scores including theory.

Hyderabad: The green thumb will get a thumbs up. Telangana state-run schools have introduced 20 additional marks for a plant project in an effort to increase the students’ interest in environment and the need to care for it.

Every student has to adopt a sapling and plant it in their respective schools or residences.

The state education department has targeted planting 50 lakh saplings during the third phase of the Telanganaku Haritha Haram.

Planting, watering and caring for saplings planted during the Haritha Haram campaign is part of the project. Twenty marks are allotted for the plant project and final marks scored by each student, which will also include theory, will be included in the final exams scores.

Every school has formed a green core student committee consisting of 12 members along with a teacher. The green core will conduct monthly checks to assess the condition of the plants.

The Green-day was observed by the state education department on July 15 when all the students planted saplings in their respective schools.

Panugothu Lakhpathi, headmaster government high school in Suryapet district, said, “According to the space available in the school campus we have taken saplings and provided them to students of class 7th, 8th and 9th for adoption. We have also formed a green-core committee comprising 10-12 children with a teacher in-charge who will assess and monitor the plant’s progress.”

He added, “Committee members not only monitor the plants but also create awareness amongst the other students who have not adopted a sapling. We have a target of protecting 3,800 plants in our mandal. And have also deployed a guard to watch the plants. It is a very good initiative as its motivating other villagers too. Also it is very nice to see students taking such good care of the plants and pampering them.” 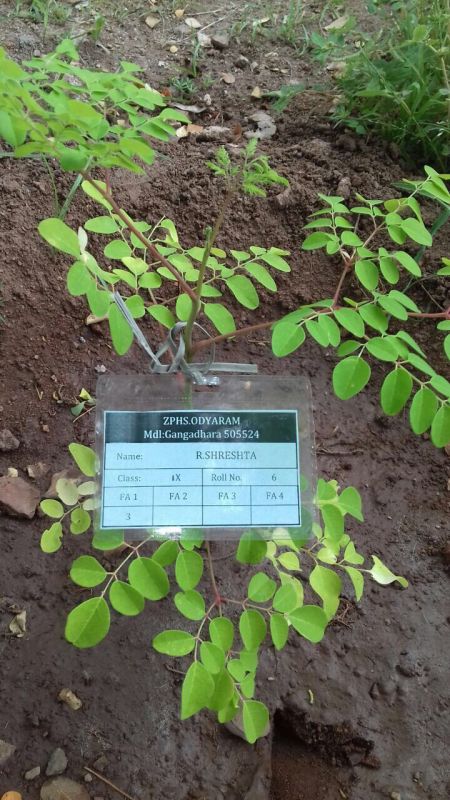 A view of the marks awarded to a student from the zilla parishad high school Odyaram in Karimnagar district for planting, watering and caring for plants.

Swaraj Kumar, headmaster, government high school Amberpet mandal said, “With this initiative, awareness has increased among students as well as their parents. Earlier students were not much interested in taking care of the plants and the environment. But now with them getting marks for taking take of the plant, the interest has increased.”

Many schools do not have the space for planting. In such cases, the children are allowed to take the plant home and care for it there.

Said Mr Kumar, “Not many schools have enough space. So the students take their adopted plant home where they water it regularly and take care of it.”

Lack of tree guards defeats purpose
Merely planting saplings during Telangana Haritha Haram drive will not help the environment, especially if the plants do not survive. Though the government’s initiative of involving students and making them responsible for caring for one plant each is commendable, the lack of safeguards to protect the saplings will defeat the whole purpose, said Telangana Teachers’ Associations.

The finance and civil supplies minister Etala Rajender had directed officials last month to purchase sufficient tree guards to protect saplings planted in Haritha Haram project. But most of the plants planted in the state-run schools do not have any tree guards. Moreover some of the state-run schools do not have compound walls or security. Together, all these issues might make the survival of saplings a little difficult.

Gaddam Rajashekhar, state executive member, of the Telangana State United Teachers Federation said, “It is the responsibility of the government to build compound walls in all the schools and deploy guards in each of them. Most of the schools don’t have proper compound walls and security to safeguard the plants due to which many plants get destroyed almost as soon as they are planted making the whole exercise futile and pointless.”

He adds, “Though students take care of the plants during school time, once they leave for home, it is not possible to check the plants. And with no wall or tree guard, the sapling may not survive. Considering that the student will also be assessed for the care he gives to the plant, it is imperative that protection is organised. Otherwise the child will also lose out on the marks and the green drive will also be unsuccessful.”

M. Ravindar, president, Telangana Progressive Teachers’ Federation said, “There are enough officials in the state government to protect plants. Why does the government want to give this responsibility to children when they already have responsibilities of their studies and extracurricular activities?”

Half of India's adult population fully vaccinated against COVID-19