Sudha Murty at the launch of her book in Bengaluru on Monday. (Photo: Shashidhar B)

Bengaluru: An auditorium full of inquisitive schoolchildren and author Sudha Murty patiently answering all their questions at the launch of her latest read The Serpent’s Revenge: Unusual stories of Mahabharata reminded one of summer holidays at their grandparent’s house.

The Serpents Revenge is a compilation of tales from the Mahabharata that aren’t as popular but are equally important. “I wanted to write something that was appealing to the present generation. Something simple but modern that had a little bit of the main story of Mahabharata. It was a confusing affair when I was young and she wants to change that,” she said, addressing a jam packed auditorium at the launch held at National Public School in Kormanagala on Monday.

The launch saw two performances by NPS students – one a theatre piece based on Ms Murty’s adaptation of the tale of the Akshayapatra, the magical vessel that produced food at Draupadi’s wish, and the second was a dance performance which was enchanting with colourful costumes and perfect coordination. The book was released by Krishnaa Khurana, Meera Mano and Melvin Mathews, students of the school. “Krishnaa always wanted a book all for herself and I decided to give her that. This is dedicated to you and it’s yours forever,” Ms Murty remarked looking at the five year old in the audience who she holds extremely dear. At the end of the launch, each student was given a copy of the book. 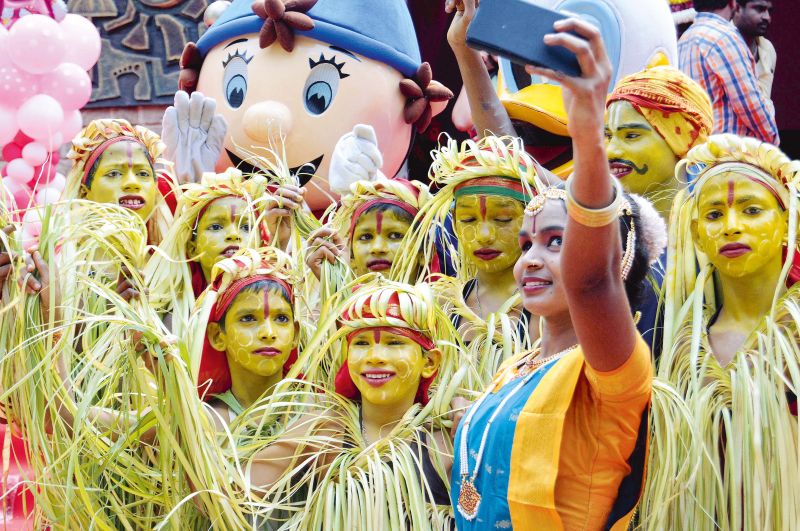 Children wait to take part in cultural programme on the occasion of Children’s Day celebration at Bal Bhavan.

Published by Puffin Books, the book is priced at Rs 175 and is available on stands now. Sudha Murty has authored several books, including The Day I Stopped Drinking Milk, Wise and Otherwise, Old Man and his God and How I Taught My Grandmother to Read and Other Stories that has been translated into about 15 languages, including Hindi, Marathi and Assamese.

Didn’t want children to lose out on our rich tradition: Murty
DC speaks to Mrs Murthy about why it is important to preserve mythology and what makes the new book a step in that direction.

Mythology tells the story of a tradition, but the complicated storytelling makes it hard for children to understand, says Sudha Murty, whose latest work The Serpent’s Revenge : Unusual stories of Mahabharata, the first volume of four books in the mythology series, is all about simplifying stories to reach a larger audience.

“I’ve been thinking about writing this book for sometime and the original Mahabharata has lots of descriptions that put you off. These are wonderful stories but complexly told, and if they stay that way, a younger audience will miss out on their richness. I wanted to write something that could be read out loud and understood easily,” she said.  Since Indian mythology has numerous gods and goddesses, she has lined up similar tales about them in the volumes to follow based on the lives of Shiva, The Trinity and stories from Ramayana.

“I was thinking about it for the past five decades. Though it feels like a risk commercially, it is a load off my chest. I’ve been thinking about writing this for 50 years, but I couldn’t figure out how to make a lean and clean copy. I don’t know if children would like it but I felt like I should write it and simplify these mythologies for them,”  she said.