In a country with varied social, economic, geographical, linguistic and cultural differences, the term ‘Unity in Diversity’ is much more than an emotion. Unity and oneness are mostly associated with the short-lived nationalism sentiments on Republic day, Independence day or Kargil Vijay Diwas, that too on social media walls splashed with colours, quotes and lines. Yet, there are instances where a united show of strength grows out of Facebook posts, shared tweets or Instagram uploads — like the current scenario in flood-ravaged Kerala.

Irrespective of caste, creed, religion, economic status and geographical barriers, human beings are showing exemplary unity is reviving their homeland and serving the people. What best patriotism than acts of compassion as the nation enters the 73rd year of Independence!

My country, my family
A fairytale act of kindness was witnessed in Alappuzha when a childless couple announced their decision to adopt a girl who was orphaned by the floods in Kozhikode; the charm continued when a businessman from Ernakulam offered them land and help to build a home there, to expedite the legal process associated with adoption.

Married for 11 years, Jetheesh and Thara have been praying for a child for long, but when they came to know about the Manusha who lost her father who passed away in one of the camps in Kozhikode, they offered to pitch in. “We have been married for 11 years and have considered adoption, but we never knew the legal formalities behind it. I work in construction field and have to work hard to make both ends meet living in a rented house. Adopting a child is a very complicated procedure, which I had no clue about.”

Adoption, for the couple is both nobility and fulfillment. “We were craving for a child when we came across a Facebook post about Manusha. Her dad Raju died at the rehabilitation camp and her mother had left them a few years ago. When I read the post, I became sad and shared it, but on a second thought, the adoption idea came. It was not a momentary decision; we have been hoping to bring a child to our life, and it is not out of sympathy. I was anxious about her future. She could be out of the camp in no time and what would happen to her after that? What if we can provide her a home, love and care? These questions moved me and I wrote under the post, expressing my interest in adopting her. The admin of the page compiled my comment and the post and reposted it. And it went viral,” says Jetheesh.

From here, the story takes off in another direction. Unaware of the legal coimplications in adoption, Jatheesh, who doesn’t own even a home, hoped to hear any good news regarding the adoption. What he received was even more big news. Njarakkal resident Jiju Jacob Moonjely, in another post, offered help to Jetheesh by building him a home.

Jiju, who runs a catering company, was collecting stuff for relief operations when he saw Jetheesh’s viral post. “I thought of doing something for Jetheesh so that both Manusha and the couple can get the best out of it.” And he made the offer.

Building relationships, Jiju believes, is the panacea to suffering. He says, “To prevent and treat post-traumatic stress disorder, these ties are the best medicine. It’s when we face the toughest times that our true nature reveals itself: we’re in it together. Kerala have been showing that to the world. Noushad, the cloth vendor who gave away all his stuff to the needy, is from my place and I thought, if Noushad can, why should not I?”

Further enquires have brought Jetheesh and Jiju to the relief camp in Mavoor where Manusha was brought in.

Before starting the procedure, the duo will be travelling to Kozhikode to meet the authorities at the camp and to get nod from her family. “It is not easy to adopt a child. We need to clarify many things. Owning a house is just one block in the puzzle. There are many legal formalities to follow. Jetheesh is very confident about clearing everything; I want to help him,” says Jiju. 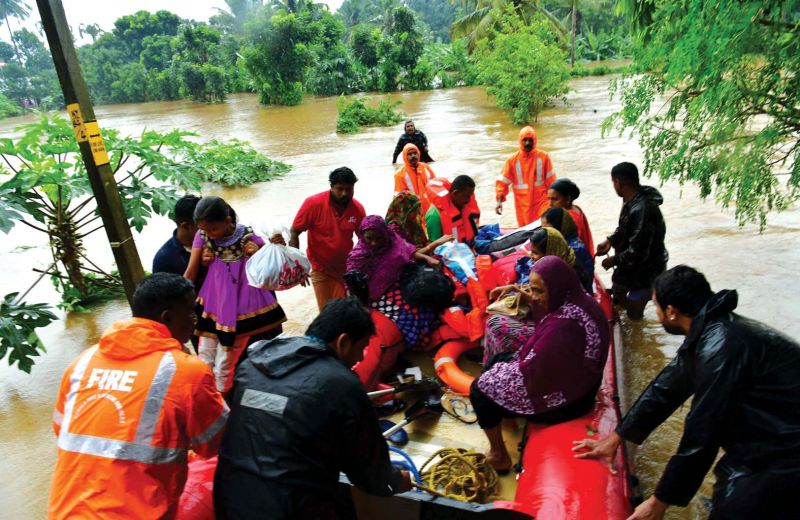 Charity, from home
Not just elders, in these difficult times, even children are leading the way in helping the flood-affected people. One of the most astonishing gestures among the entire grown-up task is the enthusiasm and hard work shown by kids to do their bit in helping their fellow-beings to resume leading their normal lives. Here is one great example.

For any seven year old, her toys, be it a single one or an entire platoon, are perhaps her most prized possessions- they would travel with her, sleep near her and keep her company at meal times. For a child to part with her favourite toy could be termed a supreme sacrifice. So when seven-year-old Siya clutched her two favourite toys Poopy and Manilla close to her heart and approached her parents with these questions, “Wouldn’t the flood affected children living in relief camps be missing their toys? Can I give them my toys so that they would have something to cuddle and clutch?” her surprised and proud parents could only mutely nod their heads.

The video of Siya collecting her toys to give away has become very popular owing to the earnestness of the kid. Siya’s father Syam Seethal says, “I never thought of donating her toys but she did and that too her favourite toys! Last year I was active in helping with relief supplies and flood relief work but this time since I was down with fever, I could not actively engage in the relief activities. She would have seen our work from last year and hence thought of doing something for the kids.”

That is how Poopy and Manilla along with some others found themselves changing hands to the less fortunate children in a relief camp enroute to Nilambur. Syam adds that Siya had donated `7000 of her piggy bank money to the flood affected last year.  Also we should not forget that toys foster an imagination, encourage role play and hand-eye coordination. For the little ones affected by the disaster, this would be a big boost too.

War heroes
Just days into the anniversary of 2018 floods, Kerala was struck by another one. Disasters, sometimes, brings out the real humane side of people. Barring the few who can’t get out of frenzied selfishness and brutal survival-of-the-fittest attitude, people coping up with crises are,  in general, quite altruistic. From choppers lifting the stranded to fishermen ferrying survivors to safety, boundless heroism has been inspiring people to live and dream of better future.

There are men like Noushad, the street vendor who emptied his cloth shop to help the needy in the rehabilitation centres. Joining him was Abdulla Andolin, a textile owner in Thrikkunnapuzha, who donated all his stock as part of his relief operations across Malabar. Cutting across religious differences, Muslim youths were seen cleaning a Hindu temple affected by the floods. Similarly, a masjid in Pothukal village in Malappuram opened the doors of its prayer rooms to doctors to conduct autopsy of the bodies recovered from landslide-hit Kavalappara.

Political rival, not enemies
A state known for its healthy political rivalry among partymen, Kerala was in for a surprise when they surprisingly came up to help their archrivals, keeping aside their political differences. Kannur, a district known for its over-the-top political rivalry, saw something wonderful last day when a group of DYFI activists cleaned the flooded Congress office at Porora near Mattannur, the photo of which is doing rounds on social media, pointing that humanity keeps surprising and inspiring.

Catastrophes can bring unexpected gifts when people share and value each other, stand up for others and stay united.

Tamil is the Language of Gods, says Madras High Court