Bengaluru: While the city celebrates Sankranti a harvest festival, not much thought is given to agrarian distress in our villages.

The number of farm suicides is on the rise and loan sharks have a vice like grip over our farming communities. On an average a farmer commits suicide every 30 minutes in the country, but little is being done to alleviate their misery.

Currently all India Kisan Sangharsh Coordination Committee (AIKSCC), a farmers’ platform, is on a mission to empower the farmers by fighting for their two pressing demands - fair and remunerative prices and freedom from debt. 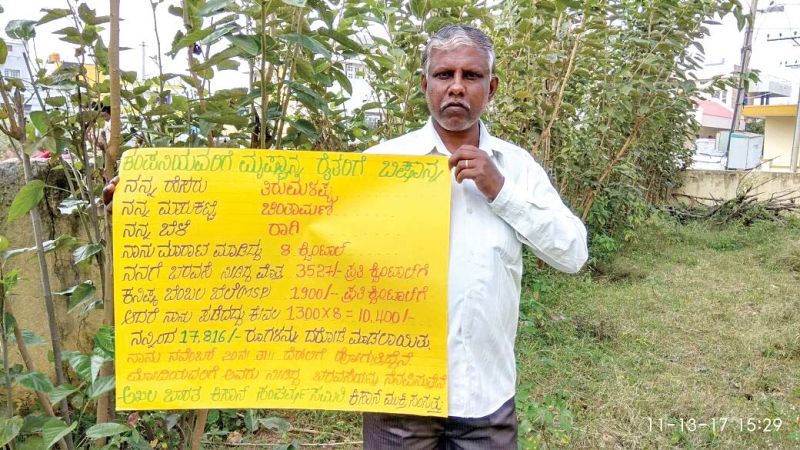 "The fight is more relevant in terms of Karnataka, as from 2003 to 2013 the state has witnessed a sharp rise in indebtedness among farm households and recorded highest number of farmer suicides,” said Kavitha Kuruganti, Conveynor of Alliance for Sustainable and Holistic Agriculture (ASHA) and also a national Working Group member of AIKSCC.

Hence, after joining hands with a vibrant movement such as AIKSCC, the farmers become more empowered with not just information, but to take their demands to the next level, she added.

"With farmers and their rights, the fight and the struggle is the same across the states, hence restricting it to just one State should not be the idea and the whole focus is to make it into a movement, a bigger one," she added.

After organising successful Kisan Mukti Yatras in different regions of the country, AIKSCC has announced its next plan of action to secure these two demands for all farmers, as immediate requirements to tackle the acute agrarian crisis.

“What needs to be done about current agrarian distress. And for the solutions we have to look at a holistic solution, which includes social, environmental and economic justice. The whole idea is to help them to turn their issues into a people's movement so powerful that the government takes notice. For this we try to connect as many farmers union across 23 States and carry out Yatras and meetings," she explained.

"Even the Minimum Support Price (MSP) that the government announces is below the officially-estimated cost of cultivation. How is the farm family supposed to run, if there is no profit margin over and above the cost of cultivating a crop? Don’t farm families have other expenses to survive with dignity beyond costs related to agriculture?" she observed.

Another cause of concern is the increase in fallow land cover. "There has been a steep increase of fallow lands or uncultivated lands, which sets off a vicious cycle of unemployment and lesser returns. Hence they need to be empowered to creative solutions for utilising more land," she added.

Municipal polls unlikely to be postponed in Telangana despite Covid worries