Ganesh Shivaswamy, a lawyer by profession and an art patron by passion, owns 126 of the 132 created.

In the year 1894, the aristocratic Malayali painter, beloved in equal measure by the British overlords and the common man, ushered in a new phase of Indian art. Having enjoyed the patronage of the exceedingly wealthy House of Travancore, Varma acted on the advice of then Dewan T. Madhava Rao, to start a lithographic printing press in Ghatkopar. The press produced oleographs - the remarkable pantheon of Indian gods and goddesses churned out by the hundred.

This was the new age: art had reached the common man. The prestigious painter, whose works so far been the domain of the affluent and the aristocratic, entered the homes of the people, bringing to life ancient temple art traditions and celebrating, for the first time in a long time, everything Indian. Women draped in sarees, wearing jasmine in their hair became icons of Indian beauty. For a country reeling under the oppressive ways of colonialism, it was a tremendous change.

Ganesh Shivaswamy, who owns the largest private collection of Raja Ravi Varma lithographs, recalls the start of his own journey: a couple of lithographs in his own home, which caught his eye. He began to collect them on his own, too, as he grew older, eventually writing about his findings as well. His writing led him to travel extensively in search of hidden links in the world of Ravi Varma. 2019 marks the 125th anniversary of the Raja Ravi Varma Printing Press and is the inspiration for Ganesh's latest series of talks. The press itself was destroyed in a fire after the artist's death but his legacy has far exceeded physical limitations of this nature! The concept of art for the masses had caught on and is seeing a revival today, with young artists putting their work on everything from mugs to t-shirts and smartphone covers. 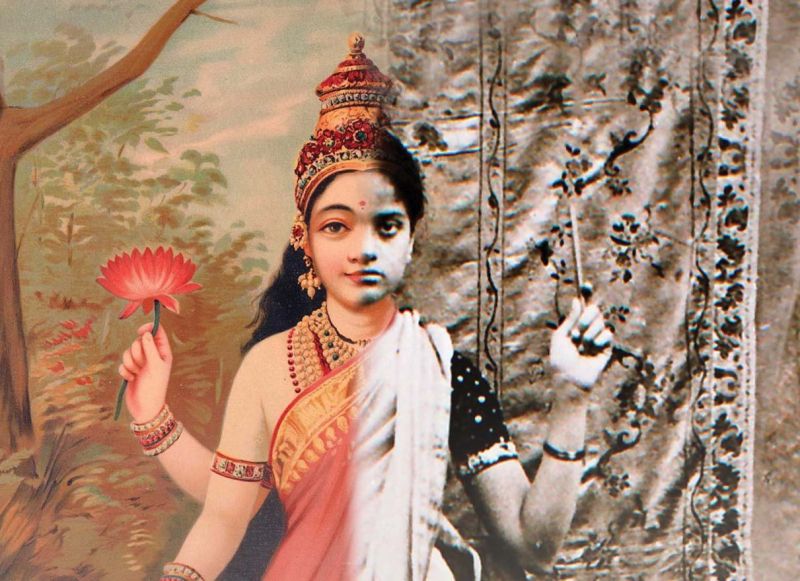 Raja Ravi Varma was a 'self-taught' artist but as Shivaswamy points out, no journey is taken alone. Varma was surrounded by guides and benefactors and was blessed, no doubt, with a canny ability to recognise them and win their favour. His uncle was an artist and his nephew went on to become one as well. Varma had been raised to experience art in all forms, from European masters to Tanjore temple work. Each form inspired and taught the hand that led eventually to a number of masterpieces.

Three images appeared during the course of Shivaswamy's talk at the NGMA. These, says Shivaswamy, are three paintings that have never been seen before in colour, having been acquired early on by a private collector. "One of these pieces, Kizhakke Palat Krishna Menon Family', was Varma's first painting," Shivaswamy explains.  The lawyer with a passion for art, Shivaswamy weaves a fascinating tale, replete with old legal documents, old photographs, glimpses into private collections and museums. He will travel to Chennai soon, to continue to spreading the word, as the Raja Ravi Varma Printing Press marks its 125th year.