Sriram Karri
Sriram Karri is the Resident Editor of Deccan Chronicle, based in Hyderabad. He is also the author of the MAN Asian Literary Prize long-listed novel 'Autobiography of a Mad Nation' and 'The Spiritual Supermarket'.

Col. Joy Dasgupta is a war hero, decorated for his bravery in Kargil.

Hyderabad: On May 9, Sunday, 84-year-old Satya Broto Dasgupta passed away at his residence in Bharani Colony, Sainikpuri.

The peaceful end came, not from Covid or ill-health but of the former soldier of the Indian army having lived his full life at 7.15 am, after he had his cup of tea, lied back on the sofa, and with a smile on his face, told his wife and life partner of over half a century, “…I think my time to go has come.”

He died a few minutes later. On getting the news, his only son, Joyanta (Joy for his friends), rushed to Hyderabad for the last rites. His mother, and he, luckily passed the harrowing test of getting a doctor to visit their house and issue a death certificate with little effort. But after the cremation rituals were finally over, given the long queues on Monday, the next day, at the Bharani Colony crematorium in Neredmet, Joy had his first shock – the crematorium could not give him a receipt. 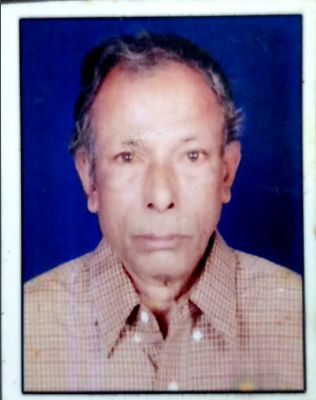 Joy, whose full name is Col. Joy Dasgupta, SM, is currently serving as the Commanding Officer, 129 Infantry Batallion (TA), ECO, JAK LI, and is posted at Jammu and Kashmir. With just a few days of his emergency leave left to return to his post on India’s borders, his little time left to be with his mother in the moment of grief began to be consumed in tackling an issue  of getting, or at least, to apply for the death certificate.

The family could make peace with the death, or given the pandemic the lack of a proper funeral, which would have been possible during normal times. But that a man who has worked for the Indian Army, Corp, EME, and subsequently, the national space agency, the National Remote Sensing Agency, Department of Space, would not even have a receipt of his funeral, making it impossible to apply for an official death certificate, did shake the stoic family. 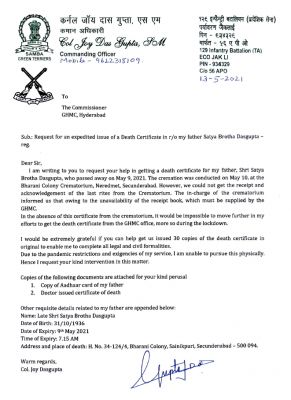 “The in-charge of the crematorium told us that they cannot issue a receipt because the GHMC has not given them a new receipt book. Given the high number of deaths, it seems to have run out of it and they cannot give anything for now,” revealed Mathie, a childhood friend of Col. Dasgupta.

The GHMC app does not provide for any complaints to be registered on the issue of death certificates. As per the app, only can only retrieve digitally signed death certificates available on the system. A call to the call centre had the agent say that requests for issuing of receipt books to crematoria cannot be taken up virtually or at the call centre.

When contacted by Deccan Chronicle, GHMC commissioner Lokesh Kumar did not respond or even reply to a question requesting to be pointed to someone else who could help if he was busy.

A slightly distraught Col. Joy Dasgupta, incidentally, is a rare breed amongst society and people. He is a war hero, decorated for his bravery in Kargil.

As a Major in 18 Grenadiers, winner of the Sena Medal, on June 13, 1999, the Indian Army records, (https://bit.ly/3fgnHRb) on its official website, Dasgupta, a Coy Cdr of assaulting coy, was tasked to launch an attack on a tactically important feature HUMP. Undaunted by resistance from well-fortified and well stocked intruders and difficulty posed by the hostile, snow-capped terrain over 15,000 feet, the officer instilled confidence and motivation in his men.

“While advancing one enemy bunker with two Machine Guns which seriously impeded the advance of the assaulting column, he displayed quick response and forethought and moved with a small team to tackle the enemy position with total disregard to his personal safety. He closed in on the bunker and charged inside killing four intruders in close combat,” the citation salutes.

Further, it says, “His action motivated his troops to press on. In an ably led operation of twenty hours, spread over the night and next afternoon despite severe cold and fatigue, he was able to capture Hump, obviating enemy’s observation and domination over Drass, Tololing and Bhimbat Nala. Maj Joy Dasgupta displayed exceptional courage, bravery, astute tactical planning and able leadership by his personal example in the face of the enemy.”

He went on to win several decorations from the Indian army for his bravery and leadership subsequently, and was deputed overseas as part of United Nations peace corp.

Over two decades ago, an entire country saluted him and his city received him with a welcome befitting a hero.

A report in a national magazine (https://bit.ly/3bnBuEJ) described this daredevil thus: INDIA fought on fatal terrain. It fought without equipment like gun-locating radars. But it won because it found unusual men. Up there at Rocky Knob, a spur of Tiger Hill, with a rock as a pillow, lay Major Joy Dasgupta of 18 Grenadiers. His voice was matter-of-fact in a situation that wasn’t. He said it was snowing, his men’s boots were torn, he was surrounded by 300 mines with unfamiliar mechanisms. Then he says he is getting bored, “Give me something else to do.”

Down at the base, they are laughing, trying desperately to relieve the tension, teasing him about a girl who ran away. Dasgupta, it seems, took leave, went to Hyderabad to get married. But the girl’s family refused, saying they didn’t know if he was going to come back. Alive.

Surrounded by three hundred mines and he is talking about girls.

That was 1999. Today, in the age of a pandemic, Dasgupta confronts a problem to many a war hero. A nation that forgets too quickly and does not care. He is not asking for recognition as a man who has risked his life. He is not asking for anything more than, as a son, be told how to get a death certificate for his father.

Analysts of warfare and military affairs have over the years highlighted the significance of his actions. As per Bharat Rakshak ( https://bit.ly/3honpdF ), “the importance of this victory cannot be underestimated. Re-taking Tololing was truly the turning point of the war.”

Today, he is just waiting for his neighbourhood crematorium to be provided a receipt book so he can fight the maze of bureaucratic processes to get a death certificate for his deceased father. Or at least to apply for it. It is not a heroic wait.

Major (retired) Jason Jacob Jesu, another Hyderabadi hero in uniform, decorated twice, winner of the Shaurya Chakra and Sena Medal, who has never met Joy and only heard of him, reacted saying, “a war hero mourns the death of his father, a veteran. He shouldn’t have to run from pillar to post for a death certificate. He will, of course, go back soon to the frontier to serve the nation. He shouldn’t have to carry this bureaucratic burden.”

Yes, with or without a piece of paper, a soldier and officer like him will go back to his post at the border and fight for India, even if no one will fight for him, his family, or care. Because he, like his father, cares much more for the idea of India. And always will. In life, or death, or beyond.

South West monsoon sets in on a farmer-friendly note