The photo, the MMK claimed sent ominous signals “creating needless apprehensions among people in the state.” “This act shows that he (Arjun Sampath) is perpetrating arms culture and inciting to destroy peace,” claimed MMK leader M.H. Jawaharilla. He also claimed that the home secretary and DGP have been petitioned about the incident. 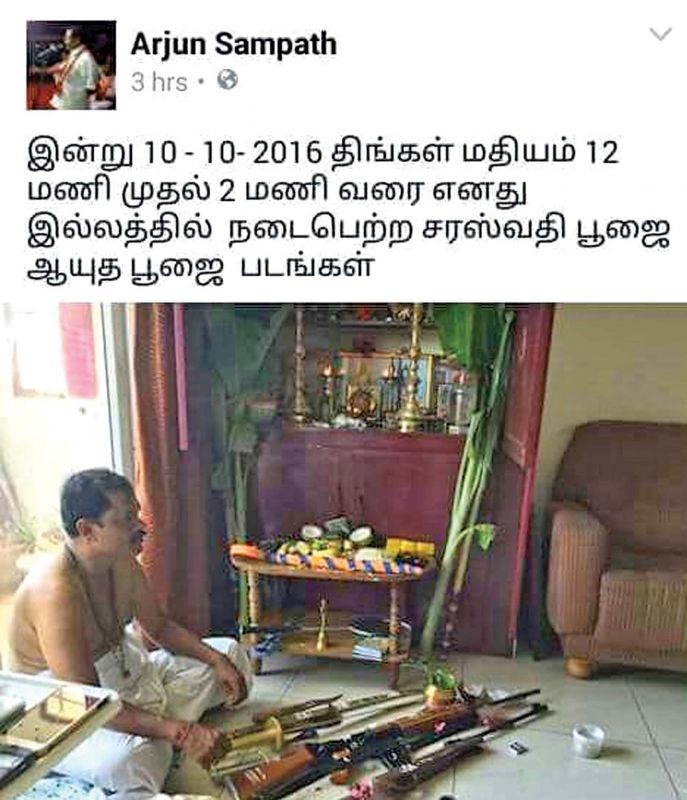 In the post, Mr Arjun Sampath was seen seated in front of images of the gods and goddesses with weapons in front of him. “They are actually swords presented to me by my well wishers (during public meetings) and the air guns are used by my son who is a member of the Rifle Club in Coimbatore. You can also see a badminton racquet. What is wrong with these?” Sampath fumed.

“It is customary for Hindus to worship the Ayudha Puja with the implements that one uses in the daily life. There is no need for Muslim outfits to find fault with our culture and tradition. They had objected to the conduct of Ayudha Puja in police stations and now they want to tarnish my image and my son's as well,” he said.
Asserting that he was a peace loving person keen on promoting the culture and tradition of the Hindus and protecting them too, Mr. Sampath said he never advocated violence or disturbed public peace and tranquility.

Heritage school, college buildings to be protected monuments in Kerala