This Nagar, disgrace to Laureate’s name

Many residents who spoke to the newspaper, complained about the recurrent water and power crisis in the area.

It’s a constituency named after renowned scientist and Nobel Prize winner Sir C.V. Raman but the despicable state of localities here and the civic neglect which is visible to all, hardly do any credit to the fair name of the constituency, right in the heart of Bengaluru.

CV Raman Nagar has many famous landmarks- the Bagmane Tech Park, one of the first tech parks in the city, major defence establishments like DRDO, LRDE and ADE and the upmarket Indiranagar, a much sought after residential locality. Over the years, most areas including Indiranagar have turned into a commuter's nightmare with traffic jams and roadblocks at major junctions. As one passes out of the DRDO township, one is shocked by the stark difference between upmarket areas and the shanties all around.

As elections near, parties are gearing up to draw the 2,60,559 voters to the polling booth and ensure their candidate emerges victorious. But winning CV Raman Nagar is no easy task as the voters, a good proportion of whom are pretty literate, sophisticated and upmarket, will not let anyone win without extracting their pound of flesh which includes regular garbage clearance, a proper sewage network and wider roads. Not to forget checks on the growing number of  pubs and reckless tree cutting which has led to bald patches all around.

Many residents who spoke to the newspaper, complained about the recurrent water and power crisis in the area. "The water supply by BWSSB is not regular," laments P.R. Das, a senior citizen who is an active member of the May Flower Garden Senior Citizens Association. Agreeing with him is Mr Mukherjee who says even the groundwater is not safe to drink. “There are frequent power cuts which probably happens because of illegal power connections," adds Mr Mukherjee. 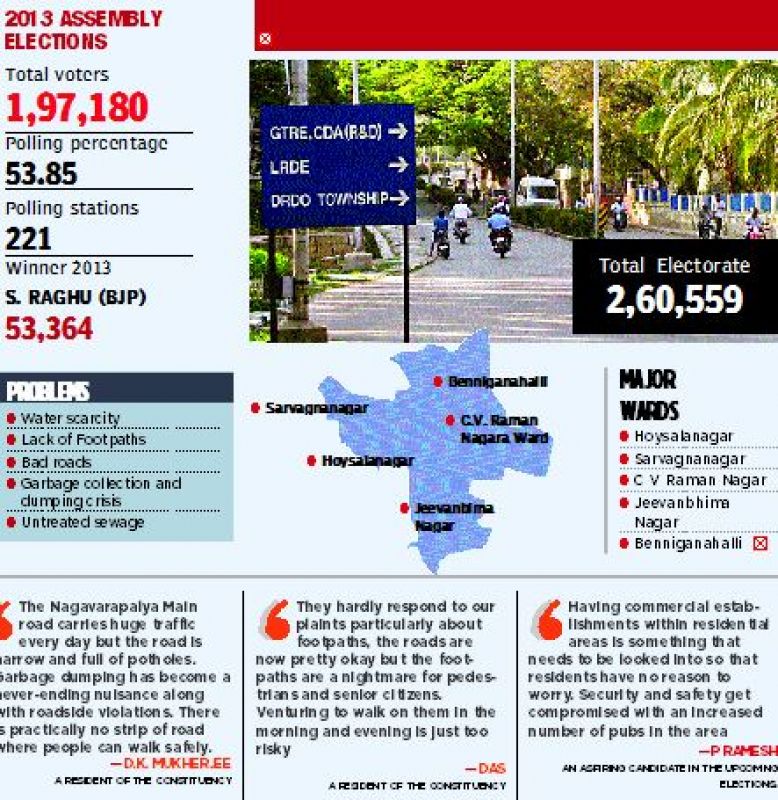 Considering the fact that the area houses several reputed defence institutions and other government departments besides software firms, its infrastructure definitely need a serious relook.   "The sewage and drainage systems are a major problem. Everyone knows that CV Raman Nagar’s population has increased exponentially over the decades and the civic agencies will have to resize the pipes. Also, garbage collection by BBMP is a major problem, what’s shocking is that the common man despite paying taxes of all kinds, also has to shell out a bribe for regular garbage collection or contend with the stink everywhere. How fair is that," asks Mr Das who however agrees that the ubiquitous potholes have reduced over the years all because of numerous complaints.

"There is no proper connection to the Byappanahalli metro station for pedestrians who have to take the traffic-laden and lengthy route to even reach the metro station. Road widening is another issue and if it is done, it could help commuters," adds another resident who takes the metro every day to MG Road.

There are many more complaints-the unscientific digging of roads for planting huge billboards is visible while walking on certain stretches. Residents have been active in fighting for their civic cause- the recent silent protests and representations made by Resident Welfare Associations protesting against noise pollution caused by the unprecedented increase in pubs and restaurants in Indiranagar, is one example.

People would like to live in a safe city with spanking roads, clean air and an evergreen canopy so that they can proudly claim that theirs is a city worth living in. And CV Raman Nagar in Bengaluru’s heart with posh localities  could have been a lot more better if elected representatives  had been a bit more attentive to its problems. Now that it’s poll time, residents are gearing up to ask the question which has been troubling their minds- on why they expected so much from their leaders and why they got so little.

Nitish, Pawar call for new Opposition front, with Congress, to defeat BJP in 2024

Gehlot loyalists say will quit if Pilot is made chief minister

Karnataka BJP MLA snaps at woman, gets her detained for asking questions