DECCAN CHRONICLE. | JOYEETA CHAKRAVORTY
Published Oct 9, 2017, 3:04 am IST
Updated Oct 9, 2017, 3:11 am IST
Her journey into spirituality and service started at an early age when her mother used to tell her about her path.

BENGALURU: Clad in the traditional Won-Buddhist attire, 81-year-old Venerable Mother Park Chung Soo is sitting at her table at the Maha Bodhi Society in Bengaluru, going through a book that she has written about her journey. Hailed as the Mother Teresa of South Korea, a movie on her life is soon to be screened at the cinemas there.

“I have travelled to India many times. I have come to Bengaluru four times, collaborating with the Maha Bodhi Society. This time, I am in India for 25 days and will be travelling to other places as well," she says.

Her journey into spirituality and service started at an early age when her mother used to tell her about her path. “When I was nine years old, my mother used to tell me that I won't get married and I have to help people and work for the people throughout my life. That was my calling," she recalls.

Later, she became a Buddhist nun in the Won Buddhist order. Her journey ever since has revolved around helping people and those in need. “I have visited 53 countries and helped 55 countries. The journey has been beautiful, if not easy," she says with a smile. Her principle is simple. “I believe in karma. If you have good karma, your life will be rewarded and if it is bad, you will never be happy. It is true," she stresses.

Her kindness has not been restricted to any one cause and her journey reveals it. She was actively involved with those suffering from leprosy and she became a part of the St Lazarus Catholic village in Korea. Also, she helped blind people learn life skills for independent living. “I helped the blind people in whichever way I could for eight years,” she says.

The Chief Director of Venerable Mother Park Chungsoo Relief Foundation has also been actively involved with the refugees in North Korea. “I went there three times and the situation is very bad. They don't even have salt for food, and two years ago, I sent two containers of salt and sent one container of sanitary napkins for the women there. They need proper agriculture and power," she says. On her plans of going to North Korea now, the Mother says, “It is impossible to go there now. But I try my best to help.” 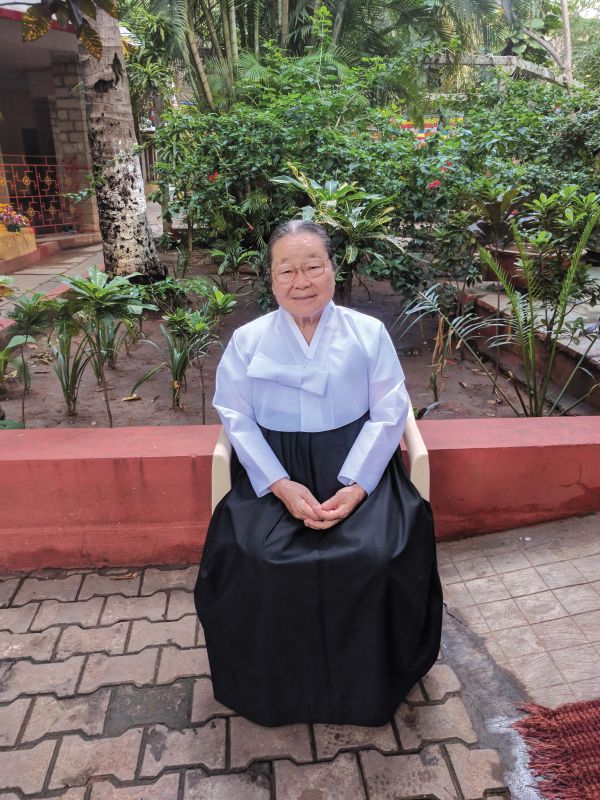 Apart from sending relief materials whenever they are needed, she has been instrumental in bringing about a positive change in Ladakh. “Education is extremely important and I helped mobilise funds for opening a school in Ladakh and in 1992 there were 25 girls. During my last visit, I was pleased to see that the numbers had touched 835 children." She had also helped send six containers of warm clothes from Korea to Ladakh for the poor. She also sent six containers of summer clothes to the displaced poor of Cambodia who lost it all after the war. In 1998 after learning from the Sanghasena that there was no hospital in Ladakh, she started relentlessly mobilising funds for setting up a hospital as soon as possible. “Now it is a 50-bedded hospital and has helped reduce maternal and infant mortality rates as well," she adds.

Her work extends from helping the poor in getting proper education, clothes and hospital, and also reaching out to sick people and displaced refugees.

Apart from receiving the presidential award from the President of Korea in 1996 she was also one of the top ten nominees for the 2010 Nobel Peace Prize. Her recognitions, however, are not restricted to awards, as her work has been appreciated in various foreign platforms. On Kathina Civara Dana Ceremony, she was honoured at the Maha Bodhi Society in the city on Sunday. “Now, I am too old. It might be my last journey to India. I just want to attain Bodhisattva. It is my dream," she pauses. Speaking about the sorrows and the world of violence, she says, “Individuals have become extremely selfish and always want everything for themselves. People need to be more compassionate and kind. We should learn to share too, share for the benefit of mankind.”

Latest From From The Print

More From From The Print