10 patients killed in fire at makeshift COVID19 facility in Vijayawada

Firemen rescue a person from the gutted Swarna Palace hotel in Vijayawada where a fire killed at least nine COVID-19 patients on Sunday, August 9, 2020. The hotel was being used as a makeshift COVID-19 facility.

Vijayawada: Nine patients have died in a major fire at a hotel that was being used as a COVID-19 facility in Vijayawada, Andhra Pradesh on Sunday morning.

According to  the local police, the fire broke out at Swarna Palace hotel at about 5 am this morning.

The centrally located Swarna Palace Hotel was taken on lease by Ramesh Hospital and turned into a temporary Covid-19 treatment facility. According to local sources, nearly 50 persons were being treated at the facility. 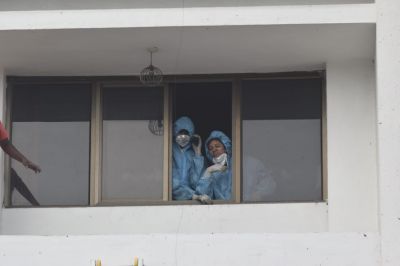 Nurses call out for help from within the Swarna Palace COVID-19 treatment facility in Vijayawada.

The nine fatalities were attributed to suffocation as smoke swiftly spread to three floors of the hotel.

Firemen broke open the glass windows and rescued 18 persons down a snorkel. They were shifted to Ramesh Hospital for treatment.

Two persons jumped from the second floor and were taken to hospital with injuries. Their condition is stated to be stable.

As the hotel is in the centre of Vijayawada, news of the fire spread swiftly and relatives rushed to the hospital. 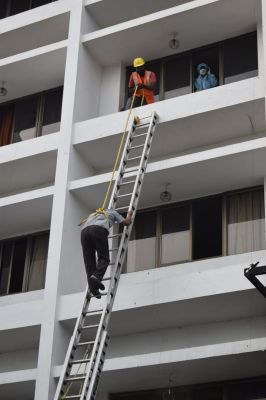 A man climbs down a fire service ladder from the fire-hit Swarna Palace covid-treatment facility in Vijayawada on Sunday morning.

The fire is thought to have broken out at about 4.45 am. ANI News quoted Vijayawada police commissioner B Srinivasulu as saying that the Police Control Room received a call regarding a fire at 5.09 am. It was doused by 5.45 am, he added.

"There were a total of 40 persons inside. The  injured people have been shifted to other hospitals. Some of them are critical," he added.

Local authorities said a short circuit was the trigger for the fire. 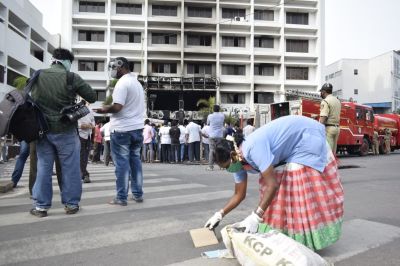 A crowd gathered at the central located Swarna Palace Hotel on Sunday morning.

Chief minister Jagan Mohan Reddy expressed shock over the fire mishap and directed the admin to take up rescue measures. A probe has been ordered into the incident. He announced Rs 50 lakh ex gratia to each person who died in the fire accident.