KOZHIKODE: The Malayalam Facebook account with the ID ‘Sameer Ali,’ which was one among the IDs used as a communication platform for youngsters to discuss the Salafi way of life, Islamic faith  and other issues, including Islamic State, was active on Tuesday even after the arrest of six persons by the NIA on Sunday. It is believed that some of the arrested were operating the FB account. Those communicating on the wall of ‘Sameer Ali’ expressed their doubts on the current status of the ID, saying the  NIA was operating it to identify the pro-IS youngsters.

Some patriots even protested on the wall and one person also wrote a letter to the chief minister seeking immediate action. However, police sources confirmed that the ID has multiple operators from various countries. The sleuths believe that the ID was operated by persons from Afghanistan and Syria at different points of time.  Such operators now opt out of Gulf countries as suspicious groups are under close watch by investigation agencies.  The FB post continued as a communication platform posting many messages. 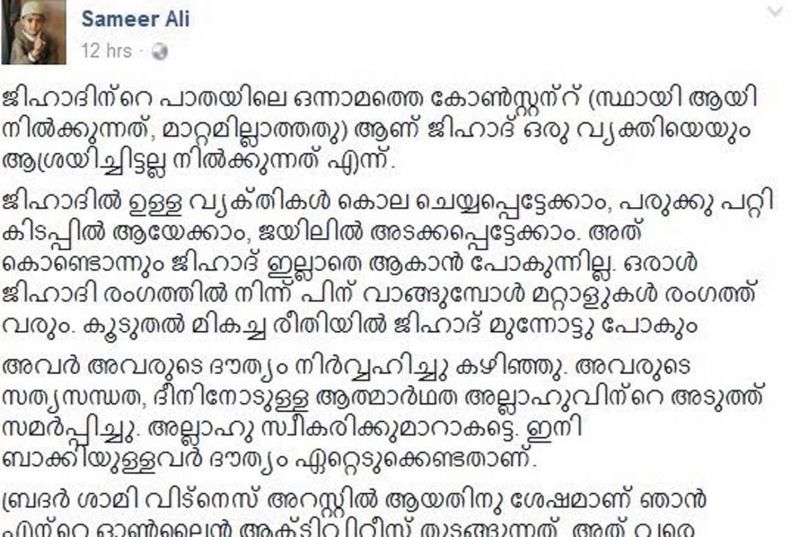 In a message posted for the followers of the group in the morning on the arrest of the youngsters, ‘Sameer Ali’ said Jihad does not  depend on any person. “It is a changeless entity. Those engaged in Jihad may be killed, critically injured, left bedridden or imprisoned. More and more persons will come and join the Jihad which would be on in a better way,”  Sameer Ali said in the post.   “They have finished their mission. Dedicated their honesty and commitment to Islam,”  the post said.