KIIFB too good to believe

If KIIFB invests in ventures like CIAL and if they can bypass the bureaucracy and get such projects implemented on time, the new initiative can lead Kerala on the path of development.

When somebody comes with a new idea sceptics are happy to condemn it. When the idea of Cochin International Airport Limited (CIAL) was mooted, many people said it was bound to fail. But thanks to Mr V.J. Kurian and his team, it became a success lauded by people all over the world.

“How on earth will KIIFB find such huge amounts?” is in everybody’s mind. The Government allocates a part of the motor vehicles tax and the cess on the sale of petroleum products to KIIFB. Certainly that is not sufficient to make such huge investments. It has been clarified KIIFB proposes to raise funds from financial markets by issuing bonds.

Raising funds from financial markets is not as easy as collecting taxes from the public. Investors like banks, insurance companies or mutual funds will not blindly buy bonds simply because they are backed by the State Government. They will critically examine whether projects will generate enough income to pay the interest and redeem bonds when repayments are due. 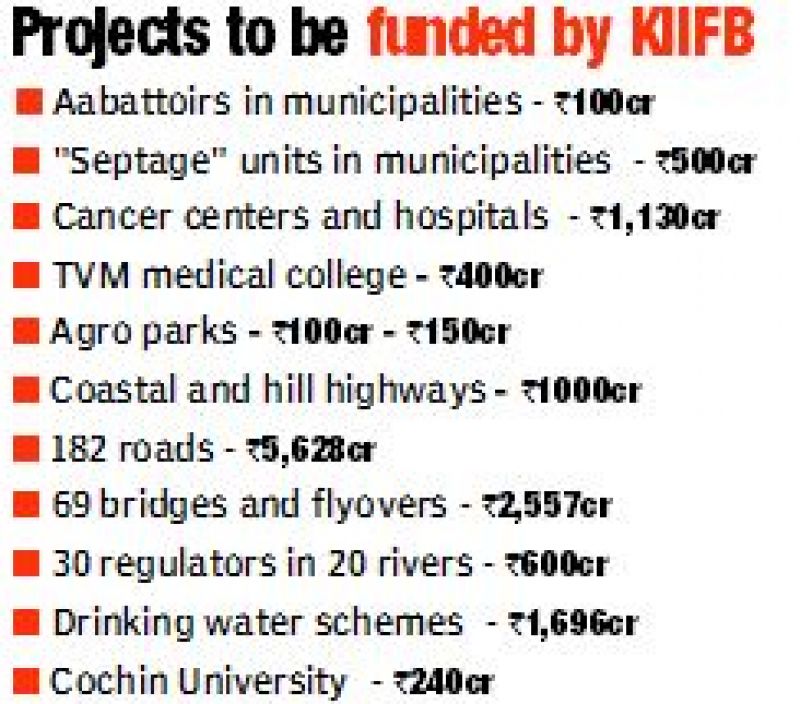 A look at the projects mentioned above makes it clear that most of them are not financially viable business ventures like CIAL. Such projects are not capable of even generating enough income to pay the interest on bonds.

Where will they find the funds to repay the principal amount? No prudent investor will put his money on such projects and burn his fingers. Some of these projects can become viable if the people are willing to pay toll for the use of the road or pay higher charges for use of water and so on.

All political parties of Kerala have to bear the blame for creating the “freebies culture” among the people. We are reluctant even to pay the toll for using a good road or a new bridge. People think that every service and every facility that the government provides should be free. They do not realize that every rupee that goes out of the treasury must first come from the people by way of tax.

A government may borrow money and spent it today on social welfare measures. But the borrowed money has to be repaid with interest tomorrow. The concept “there is no such thing as a free lunch” is antithetical to the dogma of all our political parties.

We have seen that individuals who borrow monies beyond their means often commit suicide. Governments cannot commit suicide but they escape the debt trap by putting unbearable financial burden on future generations.

Dr Thomas Isaac has come up with a new idea to raise funds for KIIFB through Kerala State Financial Enterprises. KSFE will open “NRI Chitties”. The target is to get about one lakh NRK subscribers. The subscription will be sent online to KSFE who will transfer amounts to KIIFB for bonds to be issued in the name of KSFE. When the chitty bid amount is to be paid, KSFE has the option to withdraw the money from KIIFB and pay the money to the successful bidders. The money available with KSFE for a short period will be parked with KIIFB.

According to the scheme the amount will be utilized by KIIFB. Since chitties continue for several months, this process will be repeated every ensuing month. It is a very good way to put that money to optimal use. If the cash-flow of KIIFB is robust and if they have enough cash to repay the amounts on the due dates, there will be no problem.

But if KIIFB invests monies in projects which will not generate sufficient cash, both KIIFB and KSFE will be in the soup. Dr Isaac deserves felicitations for coming up with new ideas. If KIIFB invests in ventures like CIAL and if they can bypass the bureaucracy and get such projects implemented on time, the new initiative can lead Kerala on the path of development. But if the temptation to splurge on social welfare projects is irresistible, as is seen in the budget speech, KIIFB will go down the debt spiral along with the state.