Sunday story: The boy from Bookanakere who made it to Race course Rd

There are political leaders who are born rich and into prominent families and do not have to battle it out to make it big. And there are others who are born in less than ordinary families and yet make it to the top because of sheer determination, commitment and the ability to sacrifice for the goals they consider dear to their heart. Bookanakere Siddalingappa Yediyurappa obviously belongs to the second category and all that one needs to do to reaffirm this is visit his native village in KR Pete taluk in the sugar bowl of the state, Mandya. He may have occupied the top post in Karnataka but  for many in Bookanakere, Yediyurappa is still their classmate who played football and volleyball with them and accompanied them to the nearby RSS shakha. Like other parts of the state, the CM's village too is waiting to enjoy the fruits of development and maybe a lot more considering that he still holds Bookanakere dear to his heart though his political turf in recent decades has been Shivamogga. Shyam Sundar Vattam travels through Bookanakere and visits Yediyurappa's family whohave enough stories to narrate about the son of the soil who has become CM for a record fourth time and made it a point to visit his village, days after being sworn in.

You don't need Google or the assistance of a guide to locate the ancestral house of Chief Minister B.S. Yediyurappa in Bookanakere village for any villager-young or old can take you there. When this reporter reached the village, Yashwanth, a ninth-standard student studying in a government school not only showed the house of Mr Yediyurappa but also gave a pep-talk on the veteran leader who had made the village proud.

"Don't you  know who is Yediyurappa? He is the CM who belongs to this village. He was here last week to hold a special puja at two temples after taking over the top post. If you want to know more,  you can talk to my grandparents who are in Kalayasipallya, a small locality nearby". 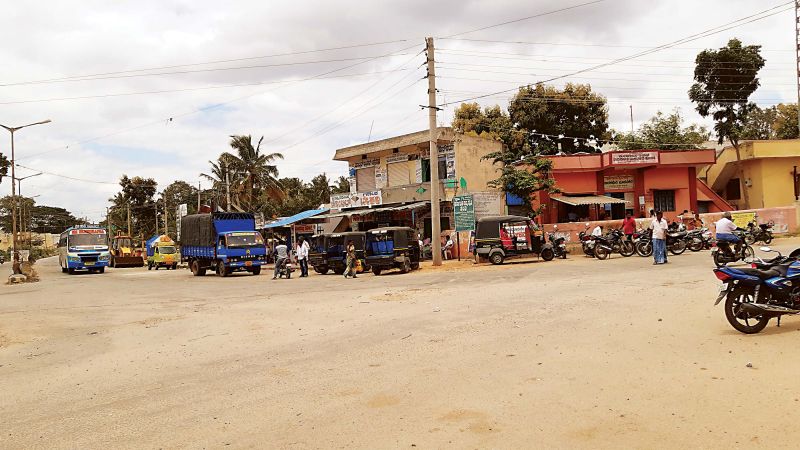 A view of Bookanakere village.

Bookanakere is situated in KR Pete taluk and has a population of around 4,000. And if Yediyurappa is known as Raitha Mithra, the reason is not hard to find for he spent his early years in a place where agriculture is the only source of livelihood. The village is surrounded by hills and there is a water tank in the middle which has now dried up. Five km away is Kallahalli which has the centuries-old Sri Bhoo Varaha Temple with a 15-feet-tall idol of Varaha Swamy (an avatar of Lord Vishnu) which attracts devotees from far-flung places.

Local people believe that their village was founded by Hakka-Bukka-the founders of the great Vijayanagara Empire on the banks of River Tungabhadra, and also had a huge fort. But there is nothing remaining to establish the presence of the fort. 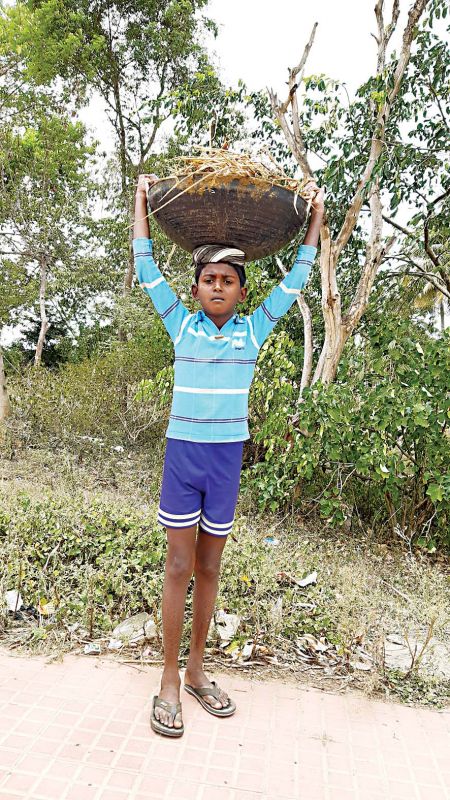 Yashwanth who guides everyone to Yediyurappa’s home.

Like other villages catching up with the development process, Bookanakere has its share of  small mobile showrooms and modern shops besides of course, apparel outlets. There is also the Gugallamma Temple of the village deity (which looks like it was refurbished days prior to the CM's visit) and a 'veera gallu' adjacent to the temple.

A stone's throw away from the temple is the ancestral house of Yediyurappa. Sandwitched between two tiled houses, the concrete house will catch the attention of any passerby and was constructed a few years ago on the insistence of the CM himself.

His family members have been pretty busy in recent days-and more so  Ms Sharadamma, an octogenarian and widow of late Mr Mahadevappa-the elder brother of Mr Yediyurappa. who was resting on the diwan due to high blood pressure but sprang up when she came to know that a journo from Bengaluru had arrived to talk to her about her  brother-in-law . "When I came to this house after marrying Mr Mahadevappa, Yediyurappa was just 10-years-old. He lost his mother when he was just four so I was like his mother taking care of all his needs. He was a bit short-tempered even as a child but he is really kind at heart. He had two elder brothers, an elder sister and a young sister. His father, Siddalingappa had around 15 acres of land but everything was lost when the Tenancy Act came into force. Now, all that the family has is a small farm on the outskirts of the village. In fact, this house was in bad shape until it was rebuilt by Yediyurappa. My children are settled in Bengaluru and want me to stay with them but I prefer to stay in this village. Yediyurappa calls me 'Attegeamma' and adores me. Last week, he insisted on having a picture with me sitting on the sofa. For me, he is not a brother-in-law but more like a son", she says with tears rolling down her wrinkled face. 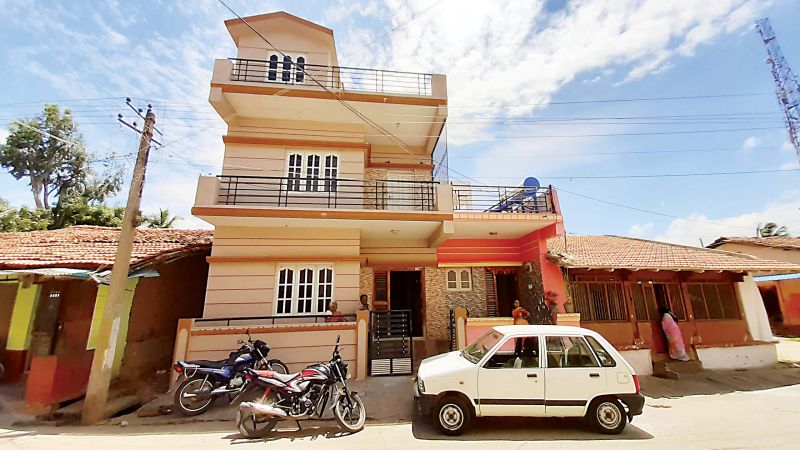 The renovated ancestral home of CM B.S. Yediyurappa in Bookanakere.

During Yediyurappa's first visit  after being sworn-in as  CM, Sharadamma was the centre of attraction giving interviews to Kannada television channels about him. In the house, there is a framed photograph of Yediyurappa with his wife late Ms Maitridevi.

Desi food is what the CM likes with Masale Rotti, Kadle Bele Vada, ghee and Avare Kai Uppitu topping the list. He used to have a big bowl of  desi ghee  at lunch and dinner but now with age catching up, the ghee has disappeared from the menu.

Even during his latest visit,  Yediyurappa sat on the floor with his son and Shivamogga MP, B.Y. Raghavendra and former minister, Basavaraj Bommai to eat Uppitu and Masala puffed rice. On the first floor, there is a big hall and a room where he rests during his visit to Bookanakere. "More than me, the entire village is elated with his meteoric rise in politics. His stars changed after he shifted to Shivamogga and went on to become legislator, MP, opposition leader, deputy chief minister and chief minister. Whatever development you see in this village is because of the special funds released by him as  CM". 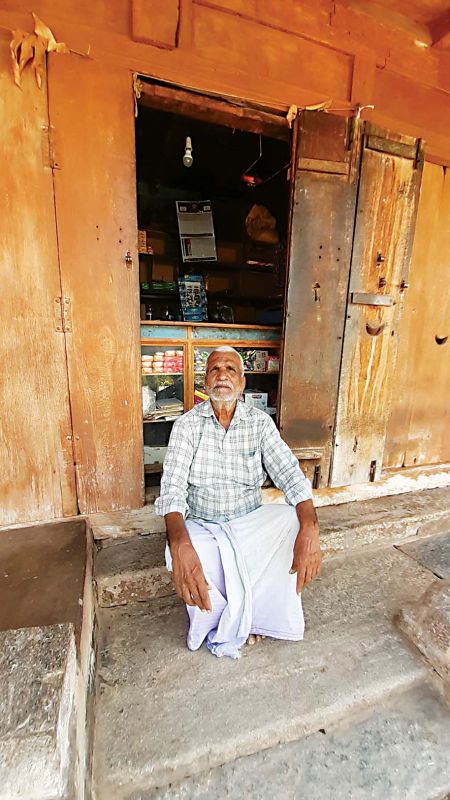 His classmates who are settled in Bookanakere, have no inhibitions about opening up about their childhood friend. Kittappa  runs a small provision store in his house and wanted to meet his friend last week but the police would not allow him to go anywhere near the CM. He stood with other villagers near Gogalamma temple to have a glimpse of the CM. “Two years ago, he came near my house and called my name. We had a brief chat too. The concrete road you  see in front of our house was a gift from Yediyurappa. I wish I had met him at his house this time but now that he is CM, every minute is important for him. When he comes here the next time, I want to meet him to say 'Sir I am proud of you.'

Kittappa and Yediyurappa studied from class 5 to seven in a government school, played football, volleyball and badminton together. And Kittappa proudly says that Yediyurappa had leadership qualities then and commanded the respect of his classmates. He even wanted to start a RSS shakha in the school!

"We get drinking water only once in three days and Yediyurappa is aware of this. He has promised to fill up the nearby tank to supply water daily in the coming months. I really felt bad when he had to resign after remaining CM for just three days last year as he failed to  prove his majority. Now God should be kind to him and allow him to remain CM for the next 3-4 years. I am optimistic that he will do good for the village".

Mr B.K. Madhusudhan, a die-hard supporter of Mr Yediyurappa, has been acting like a liaison officer to share information on his achievements in the last 10-20 years. The CM has promised to build a state-of-the-art hospital, a modern bus terminal. a community hall and more importantly to fill up all 121 water tanks in the taluk to provide drinking water to villagers. "Sir, this time our Yediyurappa sir will develop the entire state in the remaining four years. Our Bookanakere will also be fully developed," he says brimming with confidence.

From non-descript Bookanakere to the highest echleons of power, it has no doubt been a meteoric rise for Yediyurappa who has proved more than once that grit and the passion for power are the key to a politico's success. Politics is no bed of roses and though BSY as he is popularly known, had the dominant Lingayat community on his side, there were many others who feel by the wayside while he strode the political scene braving misfortune and misadventures  to rise like the proverbial phoenix proving that it's one's mettle  and not pedigree which finally makes all the difference.

Telangana's COVID-19 spike is 'just the beginning of what is in store', say experts